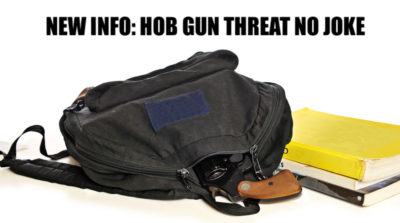 Is a culture of secrecy and favoritism jeopardizing safety at Horace O’Bryant School? New revelations lead to questions about whether the threatening Snapchat image showing a HOB student pointing a gun was really a “joke.”

On March 10th the State Attorney’s Office investigation into HOB gun incidents was closed with no consequences. Chief Investigator, Christopher Weber, found no evidence that the students who circulated the selfie with the “gonna’ bust a cap in yah head,“ caption had threatened anyone in particular; they had simply made an irresponsible “joke.”

But The Blue Paper has since been in contact with the person who posted the comment below in response to our article:

Our initial source had told us teachers were concerned that nothing was being done because “student one’s” [as we began calling him then] family has “connections” – specifically connections with the Key West Police Department.

Our original story was published just three days before the Parkland massacre. Many parents in the Keys expressed alarm.

It appears now that the gun threats involving HOB students may be more serious than was thought. There is a genuine possibility that the threat was actually directed to one particular Hispanic student.

The State Attorney’s investigative report established that “student one” admitted sending the photo to “two” other students. One student, a friend, was questioned and admitted to having added the threatening caption. But no interview with the second recipient is described in the report. Was he the victim?

Monroe County State Attorney Dennis Ward told us that, if there is a specific student who feels that he or she was targeted by the Snapchat gun threat, he hopes the family will come forward.

When we asked the author of the comment to put us in touch with the family, we were told they are now too afraid to speak out. Apparently, they have lost hope and confidence that the system will take on the issue.

In fact, when another student came forward claiming to have seen a real gun in “student one’s” backpack last January, he was all but called a liar. He was called in for questioning by the School Resource Officer, David Hall, and HOB Vice Principals, Steve Vinson and Denise Santiago. In their “field notes” the VP’s wrote that the student said he saw “what looked like a gun handle” but wasn’t sure of its color. Hall claims that by the end of the interview the student had admitted that he “had not seen a firearm.” However, when questioned in March by the State Attorney’s Chief Investigator, Chris Weber, the student unequivocally stood by his initial complaint: He told Weber he “knows what a real gun looks like and that he is sure that it was a real gun.”

After we published our story, KWPD spent a week spreading false information. First claiming they had “investigated” and found no wrongdoing. Then claiming the case had been passed on to the Monroe County Sheriff for jurisdictional reasons. KWPD Spokesperson Alyson Crean reassured alarmed parents on the KWPD Facebook page, “They [MCSO] have a full report available.” But the Sheriff’s Office told us they’d made no such investigation. Information provided to the Key West Citizen apparently left out any reference to allegations of a real gun having been seen in “student one’s” backpack.

Finally, everything was blamed on the one school resource officer, David Hall, who had “brought embarrassment to the department.” Yet, the case against Hall was carefully built, without directly involving his handling of “student one.” Instead, the justification for terminating the officer centered on the incident involving a Black student who had been expelled from HOB for coming to school with a Dollar Store orange and green plastic toy gun. They accused Hall of lying about issuing that student a juvenile citation. The Chief’s effort to terminate Officer Hall eventually fell apart; he instead received a 56-hour suspension without pay. Hall’s police powers were reinstated on March 21, 2018; he is now a patrol officer.

According to a CNN report there have been 15 school shootings since the Douglas High shooting in Parkland, Florida.

The person who made the comment about there being an actual victim of the Snapchat gun threat believes this sort of “protection” does not really do “student one” any favors: