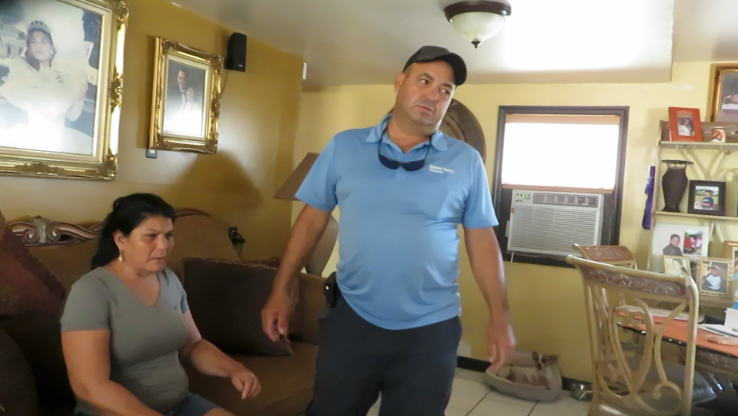 With barely 24 hours left before the expiration of a 90-day deadline, seventeen residents of a Stock Island mobile home park found a last-minute advocate to fight their eviction.

The lawyer is John B. Agnetti. “In furtherance of its deception,” wrote Agnetti in the Complaint filed Monday, “Defendant has taken steps to induce homeowners from asserting their right to object to the change in use by offering monies to impoverished homeowners and tenants to contrive governmental approval of the change in use under Florida Statute 723.083.”

On June 25th nearly 100 families, some that have been living at the parks for decades, received notices of eviction. About half of the residents own the mobile homes, the other half rent from the park owners.

The new owners say their plan is to shut down the trailer parks, clear the land, obtain approvals from Monroe County’s elected officials for increased density and new zoning and build 279 units of much needed “workforce housing.”

According to Agnetti, by law, mobile home owners have 90 days from the date of their eviction notice to formally object to the change in land use.

But he claims that the new landlords deliberately misled park residents by neglecting to mention the ‘right to object’ or the deadline to make that objection in the eviction notices.

His clients are now suing the new owner, an LLC created by the investment firms in November of 2017, Wreckers Cay Apartments at Stock Island LLC (Wreckers Cay), for damages. They are also formally objecting to the plans to shut down the park.

The eviction notices for both renters and mobile home owners bear the date, June 25th, 2018.  The Complaint was filed on Monday September 24th, precisely 90 days from that date. Residents we spoke to told us they had hurriedly signed contracts with Agnetti just this weekend.

The Complaint describes the eviction notices as “intentionally deceptive and designed to mislead them [park residents] and keep them from asserting their rights to contest the change in use.”

“The notices were not designed to advise the Plaintiffs of their rights, but to defraud the plaintiffs into being evicted from their properties,” wrote Agnenti in the Complaint.

All of the homeowners interviewed by The Blue Paper said they could not afford Key West rents and they were at a loss as to how to relocate within a reasonable distance of their jobs and their childrens’ schools.

It appears that many trailers house large multi-generational families including many children.

Section 723.083 states that local governments shall not take any action to allow a change in use of a mobile home park unless they have been shown that there are sufficient facilities for the relocation of the mobile home owners who reside at the park.

According to a report by Florida Housing Coalition President, Jamie Ross, mobile home park redevelopers have a way around the legal hurdle requiring adequate relocation facilities: They evict all residents before the redevelopment application comes before the local government board.

“Developers hire “relocation experts” to coerce mobile home park residents into leaving the park. The relocation experts offer a small lump sum of money which decreases with each month or week they delay in accepting a few thousand dollars.”

“Once the mobile home park is empty,” explains Jamie Ross, “the provisions of Section 723.083 become moot because there are no residents to be displaced—they have already been displaced.” ~ Jamie Ross, attorney and President of Florida Housing Coalition in ‘Mobile Home Parks and Florida’s Land Use Laws’.

Judge Timothy Koenig has been assigned to the case.  The park residents have asked for a jury trial.