The new housing development at Sunset Marina on College Road was embroiled in controversy right from the start. The City Commission agreed to waive, or loosen the interpretation of, a slew of city laws to assist well-connected attorney, Barton Smith, in building an apartment complex on the parking lot at Sunset Marina.

The official justification was that 39 of the 62 new units to be built would be deed restricted as affordable housing.

The 51 commercial slip owners, who need the parking for present and future customers, were deliberately ignored.

So were the pleas of liveaboards who Mr. Smith successfully argued should not be counted in parking calculations because he was evicting all of them with the help of the City’s Code Compliance department.

When The Blue Paper discovered that Mr. Smith had represented the remaining buildable land at Sunset Marina as over an acre larger, on paper, than it actually was (allowing for more units) that too was ignored.

The City Commission was satisfied with requiring only 2 low-income and 5 median-income units in the 62-unit project.

Which brings us to today, where the cheapest currently available “affordable” apartments at Sunset Marina are renting for $2,709/month plus utilities. 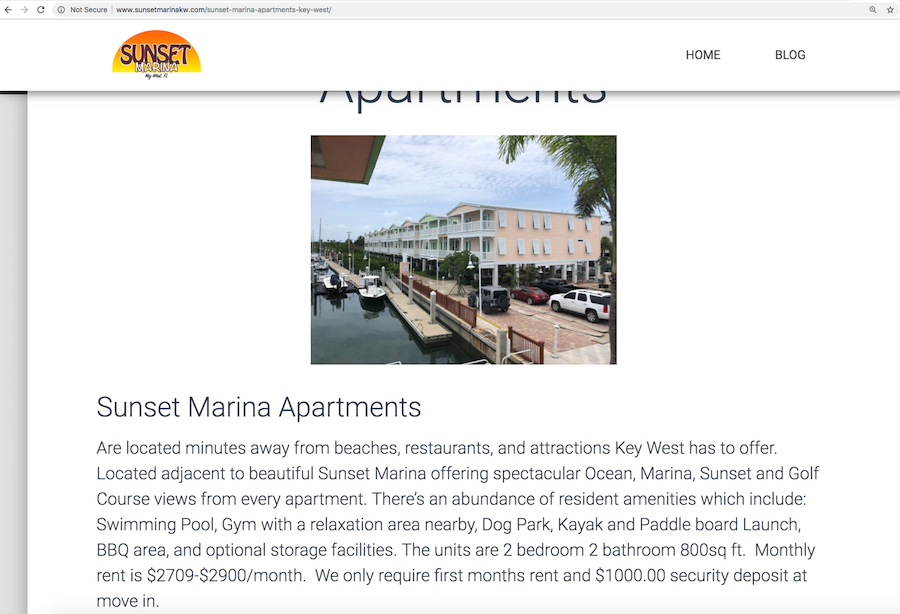 Last week when Blue Paper reporters tried to figure out just which apartments were the required low and median-income ones, they faced an impossible task.

The two low-income 2-bedroom affordable units should rent for no more than $1588/month and the five median-income at no more than $1985/month. [The other 32 “extra” affordable housing units that made Commissioners so eager to vote yes, can rent for as high as $2779/month [called “middle-income affordable”].

The rental agent said those seven had been rented “immediately.”

And they must have been, because from day 1, the only advertising for the Sunset Marina “affordable” apartments we’ve been able to find has been for units at $2709/month [the 2016 cap for “middle-income affordable”].

Reporters [and code enforcers] cannot easily knock at the doors of those 7 lucky renters without knowing which of the 62 new apartments are the low-income and median-income affordable ones.

Were the renters’ income levels vetted? Are the rents actually capped at the proper levels? Do these low and median-income “affordable” units even exist?

There is no way to find out, because as we soon learned, the owners never filed the mandatory deed restrictions that must specify exactly which units are rented at each specific affordable housing level.

This is a recurrent trend all over the City. Property owners are allowed to mix market rate with affordable as well as transient units. Without a clear record showing exactly which apartment is supposed to be transient and which is required to be affordable and at what income level there is no way for renters to know if their landlord is charging them too much or if the next-door apartment should or should not be rented to tourists.

According to official documents those finalized deed restrictions for Sunset Marina listing exactly which apartments are restricted to which income levels should have been filed with the Monroe County Clerk, as a public record for all to see, no later than April 30, 2017.