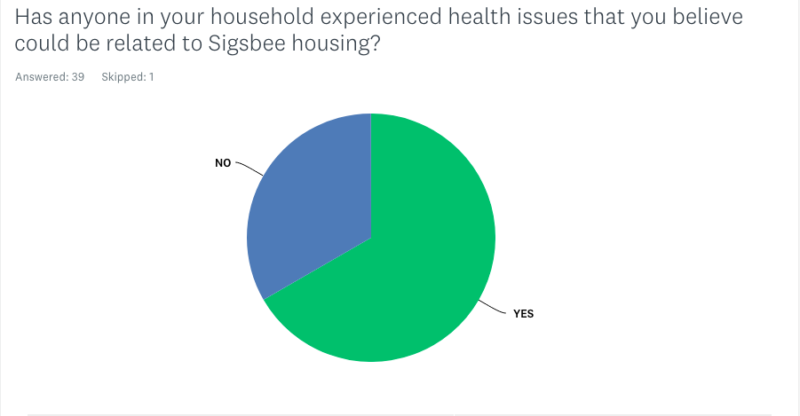 Following reports of “sick house” symptoms on Sigsbee island, we asked military families to describe any health-related issues they’ve experienced while living on the island.

Over 66% of those who responded reported having developed some form of allergy. Almost all say the symptoms disappear after moving off base. Some, however, believe they’ve suffered permanent injury to their health.

Forty families responded to our questionnaire.

Six months ago, we responded to calls from Sigsbee residents claiming that the homes they were renting on base from Balfour Beatty Communities were making them sick. At the time, we documented moldy walls, soggy ceilings, and a strange goo that was oozing out of the flooring tiles. We came back with mold expert, Hugh Johnson, who conducted a survey of one of those homes. He found mold, water infiltration, and a suspect AC system.

The U.S. Navy responded, stating that Balfour Beatty had been working with residents to mitigate any mold issues and was continuing with a 28-homes per year renovation plan.

However, we have since circulated a questionnaire among residents. It reveals that many families continue to report persistent health issues that they believe are related to Sigsbee housing.

There appears to be a clear pattern in the results we obtained.

Within a year of moving into Sigsbee, a significant number of residents were experiencing symptoms associated with environmental allergies. Residents describe respiratory problems and a losing battle against mold creeping out of the walls. In most cases the problems miraculously disappear when the family leaves for a vacation, only to come back with a vengeance when they return home.

We asked for a description of symptoms, if any, for each family member.

Some respondents said they were fine, but here are some examples from the 66% who said they were not. [Full responses and analysis are available below.]

“I was diagnosed with Lupus after living in Sigsbee housing and found out last night that another friend of my husband’s who was also stationed in kw and lived there has been diagnosed with ms. It is sad and something needs to be done.”

“We all believe it is because of the conditions we lived in there in housing ( …) I was told by my doctor this is an environmental disease.” 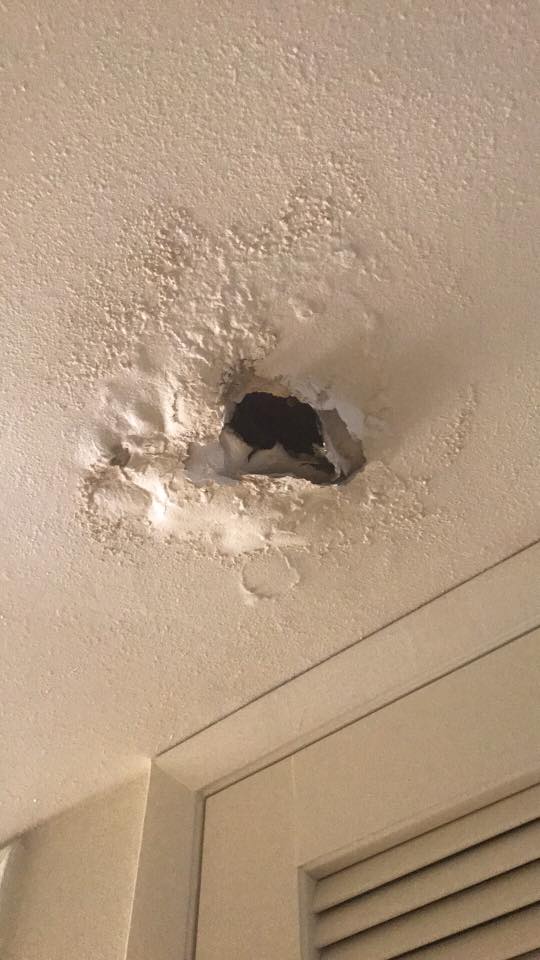 “We have a reoccurring hole in our ceiling by our pantry door. It’s been “fixed” before to the point where we just stopped calling to have it fixed. We move out on Friday and I can’t wait to know what kind of conversation this will spark…? It drips too…” — Former Sigsbee resident, name withheld [Facebook page]

In our survey, mold and moisture are the most cited culprits.

Mildew was sent to the lab, it came back as dangerous mold. Mold coming from walls. Was reported and then covered up during repairs, Soggy walls.

Ceiling constantly peeling from moisture. Surfaces in bathroom around tub and toilets discolored looks like mold, sliding door, kitchen looks to be covered in mold.

Mold on kitchen walls, ceiling and inside cabinets. Dampness on ceiling in master bedroom, brown water leaking from ceiling vents, ceiling collapsed. Glue in kitchen floors continuously seeping through (even after being “repaired” 6 times by B.B.). Water leaking out of electrical outlets, spark fire in electrical panel.

We asked residents whether they’d reported the problems and whether they were satisfied with Balfour Beatty’s response.

Base CO, Balfour Beatty. All complaints listed above. Bedroom ceiling was fixed, brown water still continued to leak out of vent, mold was painted over in kitchen, no moisture test done, spark burns in electric panel (spark mark on door) was just painted over, no repairs done. Tiles in kitchen were re-glued 6 times, each time with glue seeping up. Each “repair” was a cover up of the problem.

Residents claim the symptoms subside when they leave only to return when they come back.

Went on leave for a month, after a week of being gone, was perfectly fine again. Returned home, and was sick again.

…breathing treatments 2 times a day for last 6 months, hasn’t needed it since leaving.

There is an unequivocal distrust of Balfour Beatty.

…aware that Balfour Beatty didn’t give a shit and the Navy has no frigging clue how to fix it. DOD needs to start holding these privatized housing companies accountable for the shitty living conditions these families face. They should be earning the BAH they take from these families… but they aren’t…they collect the money, avoid paying taxes on the property and still provide substandard living conditions. Unsatisfactory on all levels and the maintenance workers and local office workers for Balfour Beatty have to bare the discontent this causes the families.

This state of distrust might explain Balfour Beatty’s recent difficulty in keeping the Sigsbee housing occupied. The company just announced that, due to vacancies, 20 units on Sigsbee island will now be available to the general public. Twelve are available immediately, beginning September 1st.

For the amount we are losing in BAH through Sigsbee Housing, I would expect better conditions and my concerns to be taken seriously. I do not feel as though Balfour Beatty is loyal to the residents of housing. Quite honestly I think Balfour Beatty is a complete rip off.

Something needs to be done and soon. I have no idea where the money we pay monthly is going to but it’s not to the houses. We need all the help we can get to get this out and set right.

BELOW IS OUR VIDEO PUBLISHED LAST MARCH

Click here to see the Navy’s response to the above video.

Click here to view the full detailed questionnaire responses.  [The families who responded to our survey agreed to do so anonymously. The IP addresses associated with the individual respondents have been redacted from this report.] Large file.

Click here to see the graphic analysis of the survey.