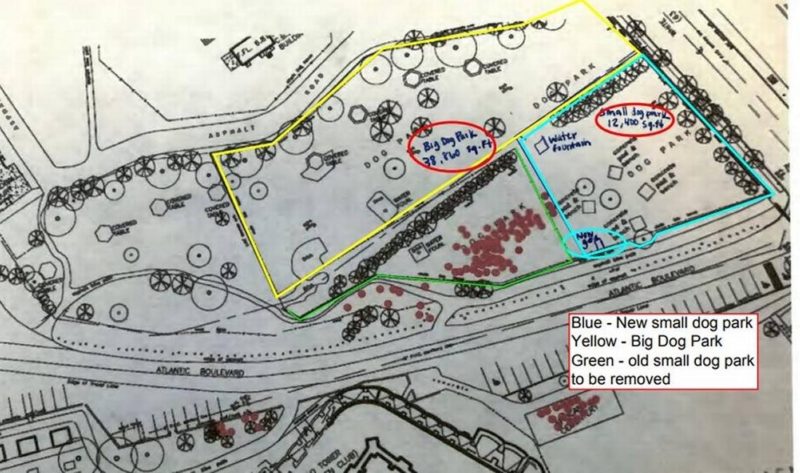 The “small dog park” at Monroe County’s Higgs Beach is being relocated into a fenced-off section of the “big dog” park after The Blue Paper published a documentary last Friday entitled, “Do All Graves Matter?“

In 2010, during the master planning process to redevelop Higgs Beach, the County had ground-penetrating radar mapping conducted to search for the graves of Cuba-bound African captives that had been rescued from three slave ships by the US Navy. Records show that in 1860, 1432 African refugees were brought to Key West but 295 were so ill from their voyage that they died before long. They were buried in unmarked graves at Higgs Beach. The first to die was an infant child. The others were mostly boys between the ages of 12 and 16.  Over 100 graves were found in the area beneath the “small dog park” during the 2010 survey conducted by Dr. Larry Conyers.

Fifteen of the 295 graves had already been located in 2002 using the same ground-penetrating radar mapping equipment. The initial survey was paid for by the Mel Fisher Maritime Heritage Society and came about in large part due to the research and dedication of Corey Malcom, the society’s archaeologist.

A memorial, designed by artist Dinizulu Gene Tinnie, was erected over the top of the graves in 2009. In 2012, the African Cemetery at Higgs Beach was officially listed on the National Register of Historic Places at the County’s request.

The Key West Cemetery prohibits dogs and enforces that rule with the threat of a $500 fine.  The Peary Court Cemetery on White Street, with one headstone and most of the bodies long removed, has a “no dogs” sign and is kept locked at all times.

Out of respect, the Higgs Beach Master Plan was developed to preserve open green space in the area where the ground-penetrating radar found the over 100 graves; the area of the “small dog park.” In January of 2011, when the plan was officially adopted, redevelopment of the park was expected to move forward quickly. But it has been delayed due to several roadblocks, including complying with a 1984 Land and Water Conservation Grant for $80,000 from the Department of the Interior. That grant requires long-term studies.

It’s been nearly 7 years since the African Cemetery at Higgs Beach, which included within its boundaries the area of the small dog park, was designated as “nationally significant.” Many residents were outspoken on social media last week in response to The Blue Paper story, asking for the small dog park to be immediately relocated. Below are just a few examples.

“The County has always wanted to be respectful of any possible graves beneath the park by creating contemplative green space in our redesign,” Monroe County Commissioner Heather Carruthers said. “We had hoped to be much further along in the redevelopment process by now. While we may never know with certainty whether graves remain in this area – or if they are graves, whose graves they are – we are taking this step to move the small dog park out of respect. And, we will continue to proceed with respect as the redevelopment moves forward.”

Corey Malcom, archaeologist for the Mel Fisher Maritime Heritage Society, had this to say in response to Commissioner Caruthers stated doubts about whether graves are there and whose graves they are:

I was there for the survey and I know what was found. The Little Dog Park is absolutely filled with graves. To quote from Dr. Larry Conyers’ archaeological report that was submitted to your office, “Grid 5: Small dog park: This grid in the small dog park immediately located a number of graves and what appears to be a “pit” that is filled with objects. So many graves were visible in this grid during collection that it was decided to collect an additional higher resolution grid to better identify the burial features.”

According to the historical record, the original African Cemetery was along the beach. There is an 1861 map showing these, and it matches exactly with those found under the present-day monument. The majority of those African graves were then removed, though, when the Martello was built in 1862, and they were reburied nearby, outside of the construction zone. The question we set out to answer in 2010 was exactly where that place might be. The data from that survey showed that over 100 graves were found scattered in a few areas of the bigger park, but the densest concentration was within the Little Dog Park. To quote Dr. Conyers again, “If some of the burials were not within coffins or informal burials of other sorts they would also be more difficult to image using GPR. So I suspect there are many more burials in this area than the 67 that are marked [in the Little Dog Park].” And he continues, “The graves in this grid are found everywhere there is not bedrock near the surface. Bedrock close to the surface was no doubt the limiting factor in digging trenches deep enough to bury the dead. Everywhere in this grid, this is the case. Bedrock limits the burial depth to the north, east and west. The limits of burials to the south are not known, as the southern fence of the dog park, the bike trail and Atlantic Boulevard are found in that area and GPR surveying was impossible. It is likely that graves continue under the road in the direction where the African Cemetery is located.” Over and over, again, graves and their locations are described in that report. The only time the word “void” is used is in reference to the hollow of intact coffins.

As I’ve said elsewhere, some might be graves from earlier times, and there are very likely graves from marginalized people who were deemed unworthy of the City Cemetery, but the relocated African burials are certainly in there. The dense jumble of burials and the pit-like feature, along with their location, all fit with the historical record. And I am not a lone wolf with crazy ideas: A careful review of this same historical and archaeological information gave reason for an independent panel of archaeologists and historians to place the site on the National Register of Historic Places as “nationally significant.”

As the plan to relocate Atlantic Boulevard moves forward, as part of the Higgs Beach Redevelopment Master Plan, there will be additional changes to the dog parks to accommodate construction.