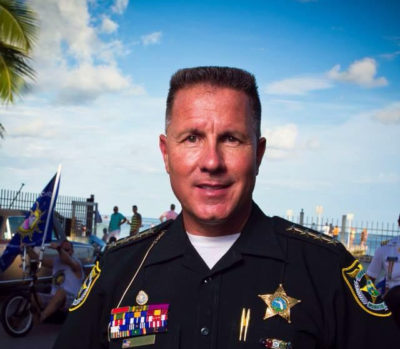 Nothing escapes the eye of Monroe County’s top enforcer.

Today Sheriff Rick Ramsay spotted and stopped a red Ford Focus that matched the description of a stolen car.

Last month he sprang into action to assist a mother and her three small children when their minivan was struck by a runaway tractor-trailer tire rim.

This afternoon Sheriff Ramsay was driving northbound on US 1 on his way to attend an affordable housing meeting.

At the entrance of the Seven Mile Bridge he passed a red car.

What followed can probably only be understood by those who have spent their life in law enforcement: somehow the Sheriff identified that car, zooming in the oncoming traffic, as a vehicle reported stolen out of Iowa.

Ramsay makes a U-turn, radioes for assistance and takes pursuit.

They stop the red Focus at the south end of the Seven Mile Bridge.

The driver whose name has not yet been released was alone in the car.

The driver was arrested without further incident.

“This was a classic case of being at the right place at the right time,” Sheriff Ramsay said. “I continue to remind deputies — as it’s a part of our training — to always stay alert and keep your head on a swivel throughout your shift, because you never know what’s coming your way. That being said, I’m very grateful that we were able to make a quick arrest and that this vehicle will be returned to its rightful owner.”

SEE RELATED: SHERIFF RENDERS FIRST-AID TO MOTHER AND CHILDREN AFTER TRACTOR-TRAILER LOSES TIRE ON US1

One Response to “Super Sheriff Catches the Thief”