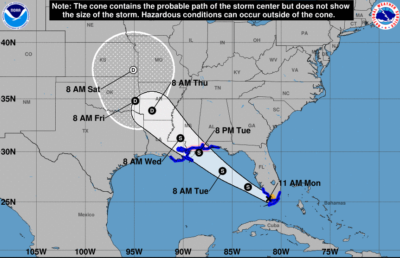 According to the National Weather Service, as of 11:00 a.m. Tropical Storm Gordon was centered about 60 miles west northwest of Key Largo, this Labor Day, with 45-mph winds. Gordon is moving toward the west-northwest quickly at 16 mph, and should move into the Gulf of Mexico early this afternoon.

Gordon is expected to strengthen gradually as it begins to move further away from the Florida Keys. Rainbands over the Upper Keys will spread gradually down the island chain this afternoon.

Winds of sustained tropical storm force have diminished at Carysfort Reef Light, however as Gordon moves westward, south to southeast winds have picked up to 15 mph with frequent gusts 25 to 30 mph in the Upper Keys. As the rainbands begin to spread westward down the island chain, brief squalls of 45 to 55 mph are possible with more sporadic squalls beginning this afternoon in the Middle and Lower Keys with gusts 40 to 50 mph possible.

While no significant coastal flooding is expected, rough sea conditions mean heavy wave action and some splashover along the Oceanside of the Keys near times of high tide onto docks, yards, and exposed streets. Quick bursts of heavy rain producing very poor visibility, causing hazards to marine and road traffic are also possible.