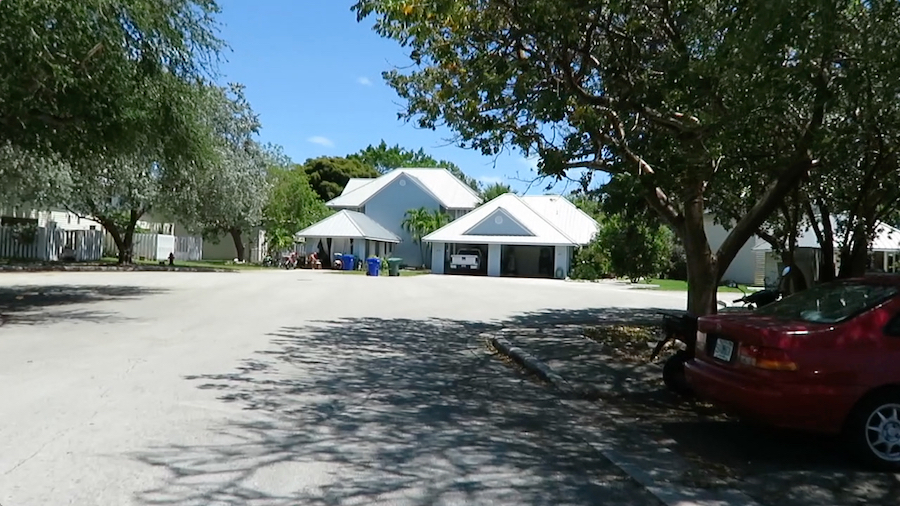 by Arnaud and Naja Girard……

This must be an all time record for how fast a small City like Key West can vet, vote, and authorize payment on a 12.5 million dollar deal. In just 2 weeks time the City dispatched 12.5 million dollars to a private company that will provide affordable housing [for up to $2709/month] for rent-burdened Key West workers. The last leg of this race to closing played out this week: the County’s Land Authority pledged the entire City reserve plus $300,000 dollars to the Cornfeld Group. The private company based in Hollywood, Florida will use the money to purchase the 157 2-bedroom units at Peary Court while adding a deed restriction for affordable housing on the entire 24-acre parcel.

After digging into some stories about affordable housing deed restrictions ‘gone bad’ in the City of Key West area, The Blue Paper had some questions about this hurried method. Officially, the mysterious sellers of Peary Court are the cause of this expedited process. “They literally have a gun to our heads,” said Claude Gardner, the local real estate agent representing Jeff Cornfeld, “They gave us only 30 days to close the deal.”

For people who can afford $2400 to $2700 a month the deal may be good news. Under the deed restriction the property is entirely dedicated to affordable workforce housing. No unit, present or future, can be sold individually. The deed restriction doesn’t fully kick-in for 2-years but will then run forever. Current residents who do not qualify for affordable workforce housing will be able to stay for the remainder of their lease period plus an additional 12 months.

For 2-bedroom units, 2016 rent caps [based on federal guidelines] go from $1546/month [low] to $2709/month [middle]. The owner can mix and match those levels at will, the only caveat shown in the code is that the total rent roll cannot exceed the equivalent of all units rented at the “moderate-income” level plus 10% [moderate-income cap for a 2-bedroom unit [2016] is $2,322/month.]

One of many mix and match scenarios could presumably be:

Arguably, Peary Court will become largely unaffordable for most Key West workers despite the deed restrictions. At this week’s County Land Authority meeting public speakers made a last ditch effort to convince the government to save that 12.5 million for the creation of low-income affordable housing. “We don’t need moderate-affordable housing,” said resident and past City Commission candidate, Tom Milone, echoing the City’s own 2013 Comp Plan data and analysis regarding the housing crisis. [The City’s data shows a need for over 1000 low and median-income rental units and a surplus of moderate-income rental units.] 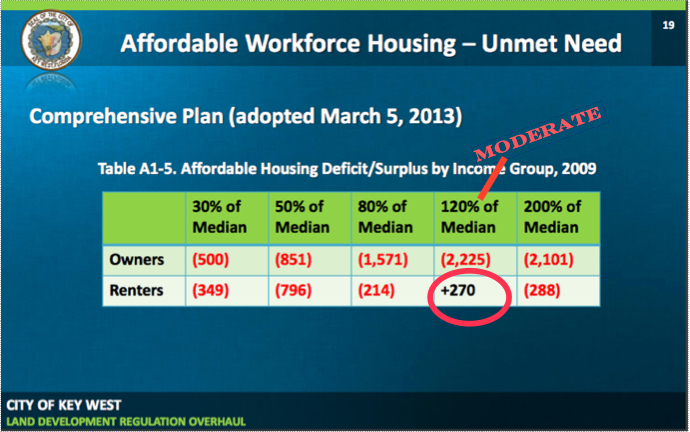 On the rooftops, on the painters’ ladders, in construction trucks, the overwhelming presence of crews from Miami manned by Latinos from South America and Haitians shows to what extent Key West’s traditional workforce is melting away. However, because of the urgent need to oblige the sellers of Peary Court, a meaningful debate about how to provide low-income housing was thwarted. Hurried City leaders may also have been less careful than they should have been about the contents of the 12.5 million contract.

“Deed restrictions are not always as solid as you may think,” said David Richardson a former board member of the Salt Ponds condo association in Key West. That development was erected in the late 90’s on sensitive land and the State imposed affordable housing deed restrictions on 108 of the units in exchange for its approval. Mr. Richardson says he paid full price for what he believed to be a market rate unit. “I ended up getting on the board. We started compiling a list of the deed restricted affordable units and that’s when, through cross-reference, I discovered that my condo was supposed to be deed restricted affordable.” His deed however made no mention of it. Mr. Richardson contacted several attorneys including Bob Tischenkel, who was then the City Attorney, “They had no answers.” Maureen Bramlage has an explanation. “It was a mess. At the Salt Ponds when condos went through foreclosure the banks would sell them free and clear of those deed restrictions. People were renting at market rate regardless of deed restrictions. No one was paying any attention.” said Ms. Bramlage. Roger Holtkamp, the manager at the Salt Ponds condos confirmed that was how things used to be.

The Peary Court deed restriction contract and its enforcement should be a concern.

Under the agreement signed this week, neither the City, the Housing Authority, nor the Land Authority are given full auditing rights or powers. Compliance will be verified by a single declaration signed annually by the Peary Court owners. Given the intricacies associated with renting 157 units at 4 different affordable housing income levels, that can change from month to month, it is questionable whether and to what extent these deed restrictions will be monitored and enforced.

In fact, the City Commission voted to buy the Peary Court deed restrictions without first seeing what the agreement would look like. “This is not City of Key West money,” City Attorney, Shawn Smith, told them, explaining why there was no written contract for Commissioners to look at prior to approval, “The City merely makes a recommendation to the Land Authority.”

“They [The Land Authority] may decide they don’t want to do it, after they look over all the contracts and look over everything,” said City Commissioner Payne, “and if they’re not happy then they’ll say no I’m sorry, your nomination, we’re not going along with it. That’s their absolute right to do and that’s their duty. So, I’m very comfortable doing this… I trust that these land restrictions are going to be iron clad and that they’re going to be something that will be to the benefit of our City.”

Yet it was clear at this week’s Land Authority meeting that the County had no intention to “second-guess” the City.

“This money is allocated to the City of Key West,” said Danny Kholage, sitting on the board of the Land Authority, “The City Commission is charged with reviewing these requests, going through all of the analysis, holding the public hearing and acting. And they have acted. It’s not for us — I do not see this as our responsibility to second-guess, go behind, reevaluate this request on the part of the City Commission. So I’m not gonna’ do that.”

If the City Commission relied on the County and the County on the City, then who is watching out for taxpayers interests or for low-income people unable to find an apartment?

The City Charter was amended in 2007 to require that the acquisition of any interest in real property be put to referendum. A previous attempt by the City to purchase Peary Court was rejected in a referendum by 58% of voters just 2 months ago. The fear of delay or possible rejection caused the attorneys to find a loophole around the referendum requirement: the County’s Land Authority, not the City, they claim, was buying the deed restriction [an interest in real property]… with City money.

In many regards the agreement drafted by the lawyers exceeds expectations: the property can only be used for rentals, qualifying tenants have to earn 70% of their income in Monroe County and have to have been County residents for at least a year.

However, as was proven by the Salt Ponds fiasco, no matter how iron-clad the deed restrictions are, the only thing that truly matters is that the requirements be enforced. In the deal between the City and the Cornfeld Group there is no requirement for an independent audit and more importantly none of the government agencies involved have a right to a full audit short of legal action.

The Housing Authority’s 2014 monitoring report, which was released in August of 2015 showed that about 40% of owners were not compliant.