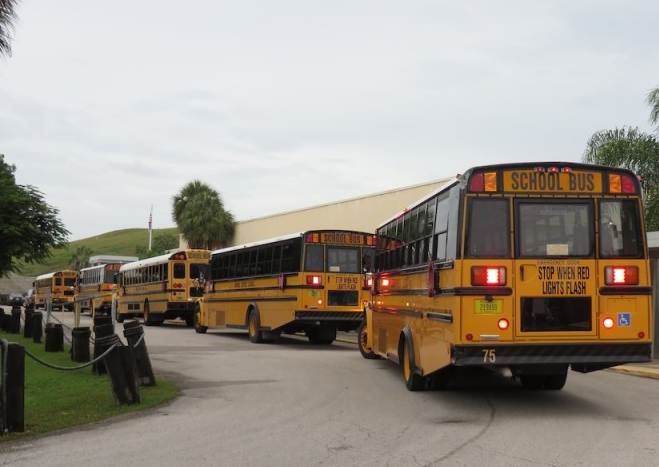 The School District has finally provided The Blue Paper with copies of its “policies and protocols” regarding gun related incidents. It took 5 weeks and the threat of criminal prosecution under the Florida public records law…

HOB school administrators had justified the apparent disparate treatment of two students by referencing a “zero-tolerance policy” on guns that even includes colorful plastic toy guns.

We wanted to read for ourselves whether that “toy gun zero-tolerance policy” was real or merely a cover up for prejudice and favoritism.

One student used Snapchat to send a picture of himself pointing a real gun at his audience. A caption was later added that read, “(Student’s name) is gonna bust a cap in yah head”. The image was recirculated.

The same student was later reported (by a witness who swears to this day that it is true) to have brought a real gun to an after-school event.

No official reports were made and no disciplinary action was taken in reaction to any of the incidents.

Another student bought an orange and green plastic toy gun at the Dollar Tree store. He brought it to school. That student was expelled from HOB and placed in an alternative education program.

When questioned by the State Attorney’s Chief Investigator, Chris Weber, about the expulsion [from HOB] of the student with the toy gun, school officials claimed they were bound by their policy:

“The school in accordance with their policy of zero tolerance, suspended [the child] for two days and moved him to alternative education thus removing him from the student body.” [Chief Investigator Chris Weber, SAO Investigative Report]

Because there were claims that the kid in possession of the real gun belonged to a well-connected family while the toy gun student was reported to be Black, the School District’s refusal to disclose its mysterious zero tolerance policy on toy guns appeared suspect.

The District stonewalled our request for five weeks and only produced their written policies after we filed a complaint with the State Attorney.

“The School Board has zero tolerance for conduct that poses a serious threat to school safety and zero tolerance policies must apply equally to all students.” [Policy 5500 – Student Conduct].

Possession of a real firearm or weapon, throwing explosives, arson, and felony assault are listed as some of the actions that would fall under the definition of “serious threat” in the policy.

In general, the District’s written policies require administrators to avoid expulsion of students unless they pose a serious threat. Administrators are to evaluate each incident for what it really is and provide counseling if necessary.

The District chose to cover-up rather than expose prejudice and reckless favoritism.

Further reading of the District’s written policies brings more questions as to their adequacy. It’s a fact that the information we receive here at The Blue Paper about drugs in schools, guns on campus or bullying is always in the form of a tip or a rumor, almost impossible to verify. Most surprising is the fact that even when an incident is actually verified, those in-charge have initially denied its occurrence.

Incidents are hidden in student files or simply never recorded or kept only in “field notes”. There is no centralized digital database, no log that catalogs all reported incidents and their outcomes. That database should exist, and it should be accessible to the public, teachers and administrators. In its public version, all student names should of course be automatically redacted.

Most parents we interviewed have argued that it would be a lot easier to keep their children safe from drugs, guns and bullies if they knew what was really happening during school hours.

It should be very easy for a parent to learn, without the identity of students being revealed, whether or not a drug search has been conducted, whether drugs were found, when and what actions, if any, were taken. A public log would also allow parents to learn, for example, when an unnamed student has been questioned about bringing a real gun to school.

The Blue Paper was recently told, by multiple sources, that Sugarloaf school had to send some students to the hospital this year because they’d ingested Tic-Tacs laced with drugs. Superintendent Mark Porter told us that such an incident has never occurred. Maybe. But, with all due respect, what does he know? He certainly did not know about the incident of the “gonna bust a cap in yah head” Snapchat images. That incident was simply never documented.

At present time what must be reported, when and to who in Monroe County schools is a loose web of politics, influence, and secrecy.

As to parents, an easy access to a nameless daily log of incidents would be an invaluable guide that could be used to warn and advise their children.

As to watchdogs and taxpayers, such a database would be a basis for evaluating the responses of the administrators of Monroe County schools and for holding them accountable.