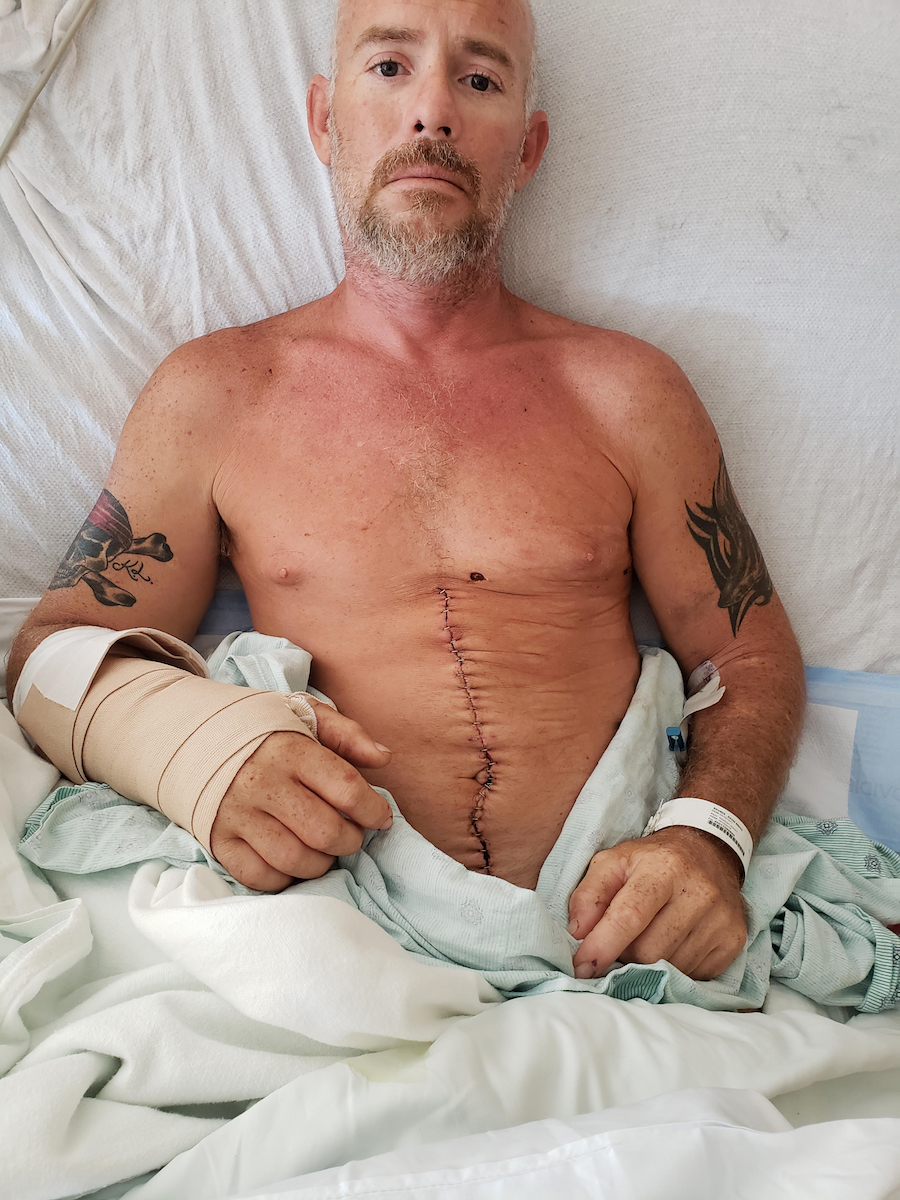 On May 21st Adam Bounds, who was shot 3 times inside his houseboat by FWC Captain David Dipre during an October 15th welfare check, was arrested for arson, attempted arson and threatening a law enforcement officer. Bounds has since been released on bond. Today we received an unredacted copy of the Monroe County Sheriff’s Office’s May 20th probable cause statement. Here it is and here’s what it says:

On October 15, 2019, at approximately 10:55 am, Adam Bruce Bounds called the Florida Fish & Wildlife Conservation Commission (FWC) Inspector General in Tallahassee. Bounds was upset because of his legal troubles with FWC.

The report says Bounds told FWC Inspector Specialist Isabelle Ghini that he wanted to harm himself – that he wanted to run in front of a bus and would rather die than go back to jail. Ghini says he also mentioned that his girlfriend left him that day and that he had been diagnosed with bipolar disorder, but did not believe in taking medication.

Ghini described Bounds’ emotions during the call as “a mixture of anger, calmness and sadness.” At times, he even began sobbing, she said. Bounds would not provide Ghini with his location. Ghini stated that during the call she felt that Bounds was “serious about committing suicide.”

(Note: A formal investigation of Bounds’ complaints to the FWC inspector general was conducted. The report describes Bounds giving Ghini a detailed account of FWC officers ticketing him and arresting him in what he perceived as a pattern of harassment but makes no mention of Bounds making suicidal statements during the call. A copy of the report is attached HERE.)

Ghini contacted FWC Major Meaney who advised her to keep Bounds on the phone until they could “ping” his location. The location information was passed on to FWC Captain David Dipre, Dipre, in turn, contacted several of his officers for assistance, including FWC Officer Glen Way. Way told Dipre that he was familiar with Bounds’ residence, which was on a houseboat anchored off of Cow Key Channel.

FWC Officers Way, Andy Cox, John Hettel, and Marty Messier responded to assist Dipre with the welfare check of Bounds. MCSO Deputies Freddy Rodriguez and Thomas Fricke also responded. Dipre, Hettel and Cox were on one boat and Way, Messier, Fricke and Rodriguez were on another.

Multiple attempts were made to contact Bounds. Rodriguez attempted to call Bounds’ phone number using Dipre’s cell phone, but no one answered. A PA System was also used to announce their presence; however, no one responded or exited the houseboat.

Dipre took the decision to board Bounds’ houseboat. Dipre and Rodriguez climbed aboard. Messier also boarded and took a cover position on the starboard side of the bow.

Dipre tried opening a sliding glass door to gain access to the houseboat, but it was locked. Deputy Fricke then boarded Bounds’ houseboat with two screwdrivers, handing Dipre one of them. Together, they were able to pry open the sliding glass door.

There was a black curtain behind the door which prevented Dipre from seeing further inside the vessel. Fricke pulled the curtain to one side. Dipre says he saw Bounds approaching him while yelling, “Get the fuck out! I have gasoline and will blow this whole place to hell!”

Dipre says Bounds had both hands above his head and that in one hand he held a red, multi-gallon gas container (6 gallon). Dipre says Bounds was actively pouring gasoline all over himself and the cabin floor, while holding a “BIC”-style lighter in his other hand.

Dipre says Bounds lit the lighter, and then Dipre yelled at Bounds to “Get back!” At this time, three officers were aboard Bounds’ vessel. Dipre was the closest officer and the only officer who had a clear, unobstructed view of what Bounds’ actions were.

Dipre says he believed all of the officers’ lives were in immediate danger. Dipre says he believed that even if Bounds only lit himself on fire, it would instantly spread due to the fact that the gasoline was running off of his body and pooling on the floor and there were combustible items on the boat. Dipre says he felt that if an explosion occurred, “everything on the boat would become shrapnel.” Dipre says he believed that the lighter “had to go out” so he gave loud verbal commands for Bounds to get back and to put the lighter down. Bounds did not and Dipre fired his service weapon three times, striking Bounds at approximately 1:08 p.m. Dipre estimated that he was approximately five feet away from Bounds when he fired.

Deputy Fricke was standing by the sliding glass door, holding the black curtain back, so Dipre could have an unobstructed view. Fricke says from his position, he could not see Bounds holding the lighter, but he could see Bounds with the red gas can, pouring gasoline all over himself and the floor. Fricke says he could also smell a strong odor of gasoline. He remembers Bounds making the statements, “Get the fuck off my boat! I’ll blow us all up!” followed by Dipre telling Bounds to, “Put the lighter down. Put the lighter down.” When Dipre yelled, “Retreat. Retreat,” Fricke let go of the curtain and Dipre fired his weapon.

Deputy Rodriguez says he was positioned to the right of Deputy Fricke and was standing on a floating dock tied to the houseboat. He says he could not see Bounds from this location, but heard Bounds saying, “I’m going to blow us all up! You are trespassing on my boat!” Rodriguez says he also heard Dipre say, “Drop the lighter! Drop the gas can!” He says he then saw Dipre fire his weapon.

Bounds fell to the floor and was immediately secured in handcuffs. He was then rushed to shore, where Key West Rescue transported Bounds to the hospital.

The report states that although a total of seven law enforcement officers were on scene at the time, only four were wearing body cameras – Messier, Cox, Hettel and Way. FWC Captain Dipre, and MCSO Deputies Rodriguez, and Fricke were not wearing body cameras. There is no footage of Bounds’ actions or the subsequent shooting.

(Note: At this point we have only a partial transcript of what can be heard on the available body cam footage as depicted by MCSO in the probable cause affidavit. It does not reflect the verbal threat by Bounds to “blow us all up”, or the officers yelling “drop the lighter”, “drop the gas can,”, “put the lighter down”.)

The probable cause affidavit says that on Messier’s body camera you can hear the following statements leading up to the shooting starting around 1:08:45 p.m: “Sheriff’s Office. Sheriff’s Office.” “Get the fuck out of here!” “Get back! Get back!” “Get down! Get down!” “I’m going to shoot you!” “Get down man! Don’t do it!” “Get the fuck off my boat! You guys are trespassing!” “Get down! Get down!” “He’s soaking himself in gas.” On Cox’s audio the report states you can hear, “Get down. Don’t do it. Get back. Get back.” The affidavit states that on all four body cameras you can hear the three gunshots (right before 1:09 p.m.).

The report also states that once back at the dock and while awaiting for Key West Rescue to arrive, Messier’s and Cox’s body cameras capture Bounds making the following statement: “I wasn’t going to set myself on fire. I wasn’t. I really wasn’t. I just wanted you to leave me alone. I was scared.” (1:16 p.m.)

MCSO Crime Scene Investigator John Underwood collected two “BIC”-style lighters as well as a six-gallon gasoline container missing approximately one gallon of gasoline from the houseboat. The report states that Captan Dipre’s and Deputy Fricke’s clothes were also collected due to having blood and gasoline on them.

Adam Bounds was interviewed by Florida Department of Law Enforcement Special Agent Andrew Kempel. The report states that during the interview, Bounds admitted that he contacted the FWC Inspector General in Tallahassee to make a complaint, but that he does not remember making any other comments. He said the call taker asked him if he was going to harm himself and he said no.  He said he refused to provide his location. Bounds said that he vaguely remembers the phone call and after he hung up, he stayed on his boat and went to sleep. Bounds said that he is a heavy sleeper and did not remember any of the officers trying to make contact with him; whether it be by phone, by hailing, or by pounding on his door. Bounds said that he awoke to the sound of his door being pried open, so he got out of bed and approached the door, but doesn’t remember what happened next, except that he was shot. He said he did not have time to say anything and that he doesn’t remember pouring gas on himself; however, he recalls hearing one of the officers say something about gas and a lighter.

The arrest affidavit also states that Bounds’ phone records show he wrote a text to a friend at 12:41 pm that said: “FWC is at my boat now” and that there were three missed calls from Dipre’s cell phone at approximately 12:42, 12:44, and 12:50 pm.

Bounds has been charged with violating Florida Statutes 806.01.1 (Arson) and 777.04(1) (Attempted Arson) “for attempting to light himself, Captain Dipre and/or his houseboat on fire, by pouring gasoline over his head and letting it run off his body and onto the floor of the houseboat, while simultaneously lighting a lighter.” Bounds was also charged for violating Florida Statute 784.07.2c (Aggravated Assault on a Law Enforcement Officer) “for threatening Captain Dipre, by pouring gasoline all over his body, while simultaneously lighting a lighter and saying that he was going to blow everyone up.”