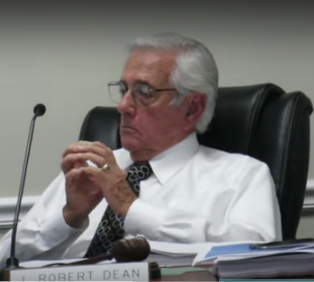 The documents often begin with: “I, J. Robert Dean do solemnly swear” and thereafter the facts seem to change and contradict each other depending on what Dean needs to do to stay in power.

In response to those who accuse Dean of unlawfully sitting on the FKAA Board and of not being a Key West resident, Dean now swears under oath that his small Key West apartment at 417 Bahama Street, not his luxury home on Key Haven, has “always” been his primary residence.

Thanks to new information, we can now try to put together a timeline showing the ascendancy of what many believe to be the most secretive and powerful man in Key West: James Robert Dean, literally Key West’s undertaker, Chairman of the FKAA Board of Directors, and leader of Key West’s Housing Authority, having jurisdiction over more than a billion dollars in assets.

It’s 1998. Bob Dean is Chairman of the FKAA Board of Directors. At this point he represents District 1 [Lower Keys]. All of his documentation shows that he lives with his wife at 14 W Cypress Terrace in Key Haven. His Homestead exemption is listed at the Key Haven home, he votes in County elections but not City of Key West elections and he is a registered Democrat appointed to the FKAA board by a Democratic Governor.

In January 1999, Jeb Bush becomes Florida’s new Governor. Bush, a Republican, doesn’t reappoint Dean. He loses his seat on the FKAA board in March of 2001.

In 2005 a seat on the FKAA board will come open, but it is the District 3 [Key West] seat. At this point Dean has changed his party affiliation to Republican, but he is a Key Haven resident.

Dean applies for the seat. He changes his voter registration address to 417 Bahama Street in Key West and 37 days later, on January 5, 2005, Governor Bush appoints Dean as the District 3 [Key West] representative to the FKAA Board.

By 2008 FKAA is embroiled in accusations of nepotism and corruption. In August 2008, a citizen complains to then State Attorney Dennis Ward, claiming Dean is illegally voting in City elections and that he shouldn’t be sitting on the FKAA Board as the District 3 representative since he lives in Key Haven, not at 417 Bahama Street in Key West as he claims.

Water consumption records for the Bahama Street apartment clearly show repeated periods of several months at a time with zero water consumption. For instance beginning in August 2008 (when the citizen complaint came in) all the way through April of 2010 there was only one month during which any water was consumed at all: That was June 2009 when 100 gallons of water were used. [Typically household water consumption is 100 gallons/DAY per person.]

The 2009 State Attorney investigation of Bob Dean’s residency produced a one-page document. The “investigation” relied on verbal assurances by Dean and then Supervisor of Elections, Harry Sawyer that Dean lived at 417 Bahama Street.

Three weeks ago, when we interviewed Supervisor of Elections Joyce Griffin, who was the assistant to Sawyer at the time, she said, “The only thing we did back then was ask Mr. Dean, ‘Do you live there?’ and he said yes he did, and that’s all we did.”

It’s July 1, 2011. Water consumption at 417 Bahama Street still doesn’t resemble normal household usage. (Zero gallons on the previous monthly reading.) Dean pays utilities for the Bahama Street building, but even though there is a mailbox at the front door, all of the bills are directed either to his Funeral Home office on Simonton Street or his home in Key Haven.

It’s July 7, 2011 and Bob Dean needs to renew his driver’s license. (Giving false information to the Department of Motor Vehicles in a driver’s license application is a felony of the third degree.) On his renewal application, Dean swears to the DMV that his principal address is 14 W Cypress Terrace, Key Haven.

It’s September 2015. New accusations of corruption at FKAA bring back the issue of Dean’s residency and his right to the seat on the FKAA board. This time Chris Weber, now Chief Investigator at the State Attorney’s Office, decides to actually investigate the matter himself. He notes that Dean’s homestead exemption is attached to his Key Haven home, that Dean’s mail goes to his Key Haven address. He finds there are very few personal items in the small apartment, and that for his business licenses, driver’s license, car registrations, title warranty, mortgage documents, and home phone service Dean uses the Key Haven address.

Chris Weber wrote in his September 16, 2015 investigative report: “When asked how many nights he has spent at 417 Bahama St. during the last six months, he said, ‘maybe six nights.’”

On September 18, 2015, Dean goes to the Department of Motor Vehicles and changes his driver’s license address to 417 Bahama Street. 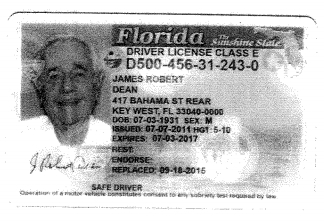 On September 25, 2015 Dean’s attorney, Michael Halpern, informs the FKAA Board that if it is decided that his client is indeed prohibited from voting in Key West then he should resign from the board.

On Friday October 2, 2015, despite a clear warning by the State Attorney and the risk of prosecution, Dean votes in the City election.

On October 7, 2015 Dean transmits an affidavit to the Supervisor of Elections in which Dean swears under oath that,

He also swears that in 2009 he attempted to remove himself from receiving homestead exemption at the Key Haven home but that the effort was unsuccessful. This claim is contradicted by the property appraiser’s office:

“Our office does not have any record(s) of Mr. James Robert Dean attempting to remove himself from the homestead exemption he has with his wife Donna Dean at 14 W. Cypress Terrace in Key Haven in 2009 to the present that I am able to locate.”

Aside from compensation for attendance in the amount of $430 per meeting, FKAA Board members receive healthcare benefits for themselves and their immediate families. If Dean is voting illegally, is he doing so in order to retain those benefits? (Willfully voting outside one’s district is a third degree felony punishable by up to 5 years in prison.)

This morning, Friday October 9th at 10:00 am in the office of the Supervisor of Elections, 530 Whitehead Street, #101, the Key West Canvassing Board will review State Attorney Catherine Vogel’s challenge to Mr. Dean’s right to vote in Key West elections.

The Blue Paper once again thanks Colby Fisher for his help with research for this article.