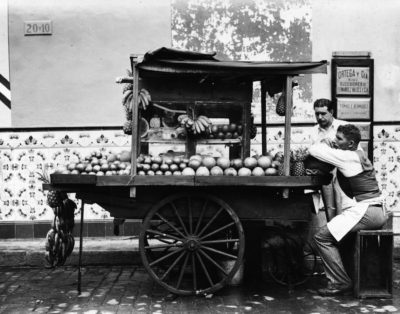 Fans of Walker Evans can explore the Havana of 1933 through his eyes in, “3 Weeks in Cuba: Walker Evans & Ernest Hemingway,” which will be displayed on the ground floor foyer of the Custom House Museum through October 10, 2018. (Photo courtesy Key West Art & Historical Society)

A selection of prints captured by Walker Evans, an American photographer recognized for pioneering a documentary style of photography during the Great Depression on behalf of the Farm Security Administration, is currently on exhibit in the foyer at the Custom House Museum.  “3 Weeks in Cuba: Walker Evans & Ernest Hemingway” features 12 of Evans’ 46 images taken while on assignment in Cuba, and reveal a visual account of Havana in 1933.

Considered one of the greatest photographers of his time, Evans’ straightforward precision in his approach to portraiture and documentary redefined the genre. A literary thinker, most of his images were shot for books, magazines, articles, and essays. Some of the prints in the Custom House exhibit were included in the book “The Crime of Cuba,” published in several magazines, and featured in other gallery exhibitions.  They form part of the larger collection of 46 on loan by Key West local Benjamin ‘Dink’ Bruce, whose family were longtime friends of the Hemingways.

Evans, who was on assignment in Cuba for “The Crime of Cuba,” an expose of the corrupt regime of President Gerardo Machado, feared the images could be confiscated by Machado operatives. Evans entrusted the 46 images to Hemingway, who was also in Cuba gathering material for his novel “To Have and Have Not.” The two had met purely by coincidence, spending many afternoons and evenings together, forming an ephemeral friendship.  Hemingway even loaned Evans money to extend his stay in Cuba when his assignment money ran out.

The images capture a range of micro and macro information and reveal the context of Havana’s 1933 culture, doing with images what a writer might do in words.  Beggars, children, café patrons, fruit cart vendors— the images relay “Cuba’s people, its ethnic diversity, its shops, professions, the look and feel of its street and urban life,” says Society Curator Cori Convertito, PhD.

“Life for Cubans in the 1930s was tumultuous,” she says. “Their political system was in the midst of an upheaval, but for visitors, it was an entirely different experience.  Havana was a flourishing and fashionable city which attracted many literary and musical greats, along with some of Europe’s most distinguished luminaries and personalities.  The dichotomy of the poor residents alongside the well-heeled visitors shaped both Evans’ and Hemingway’s experience in Cuba in 1933.”

Though Hemingway and Evans never corresponded nor met again, those weeks in Havana had a lasting effect on each of them, and over the years, they commented on their friendship and time together.