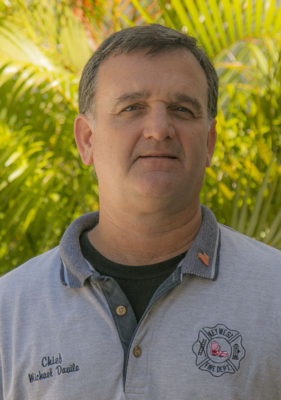 The arrest and terminations were in response to credible information that came via KWPD’s Special Investigations Unit regarding possible involvement of fire department personnel with narcotics activity.

A suspect referred to in a transcript as “OP” [other person] was pulled over on August 7th by members of the KWPD Special Investigations Unit and was allegedly found with cocaine in his possession.

Upon the orders of City Manager Jim Scholl, all three fire stations were searched on August 10th. The interiors of the fire station buildings, fire trucks, ambulances, and personal vehicles of fire department personnel were all inspected using KWPD K-9s.

The search relative to Fire Station 1 allegedly turned up “crumbles” of cocaine [approximately 0.02 grams] in firefighter Arlen Fernandez’ personal vehicle and a trace amount of cocaine [using a cocaine test wipe] was allegedly found in another firefighter, Keith Hernandez’, vehicle.  [Hernandez was released without incident.]

Officers assigned to conduct the sweep at Fire Station 2 found a locked fire house. KWPD officers reported that upon “eventually” gaining entry, a KWPD K-9 alerted to the presence of narcotics in one employee’s vehicle and six distinct areas inside the fire station. However, the subsequent search of the vehicle and the interior of the fire station turned up no contraband.

The search of Fire Station 3 turned up a small piece of marijuana in fire engine “8”.  After testing, the remaining amount of marijuana was too small to be used as evidence. A K-9 alerted to the presence of narcotics in an area inside the laundry room. A subsequent search of the laundry room did not turn up contraband.

At approximately 4:40 pm on August 10th officers conducted a raid on Fire Station 1.

Lt. Alfredo Vasquez initially contacted KWFD Shift Commander Mark Sellers and advised him of what was going on. All personnel were asked to remain on scene.

Detective Jesse Hammers utilized KWPD K-9 dog “Mango” to search the interior of the fire station. “Mango” alerted to the presence of narcotics in a locker located in one of the bedrooms at Fire Station 1, the room being used by Arlen Fernandez.

Just prior to the raids on the fire stations KWPD Detective Hammers and Detective Karl Malsheimer witnessed Arlen Fernandez get into his Ford F150, leaving Key West Fire Station 1 on North Roosevelt Boulevard and heading to City Hall on White Street.

After Fernandez parked and went inside City Hall, Detective Hammers had K-9 “Mango” conduct an exterior sniff of Fernandez’ truck. “Mango” reportedly alerted to the presence of narcotics inside the vehicle.

KWPD Detective Karl Malscheimer found Fernandez inside City Hall and they then walked out to the vehicle.  Fernandez was told about the investigation and was asked for permission to search his vehicle and bedroom. Fernandez initially asked to speak to a lawyer but did give his truck keys to Malscheimer, while claiming he had not been driving the car.

A search of the vehicle reportedly turned up small amounts of white powder “crumbles” both in the center console [.01 grams] and on the floor behind the driver’s seat [.01 grams] that field tested positive for cocaine.

Malsheimer read Fernandez his Miranda Rights as he sat on the front steps of City Hall. Fernandez then agreed to speak with Malsheimer, reportedly admitting that he had been driving the car. Fernandez denied any knowledge of the cocaine inside his vehicle.

A search warrant was obtained for Fernandez’ bedroom at Fire Station 1.  The search turned up a bottle that detectives described as “suspected urine.”  Fernandez had gone to City Hall that day for drug testing. No contraband was found in Fernandez’ bedroom.

The K-9 also alerted to a Jeep SUV belonging to firefighter Keith Hernandez. Hernandez did not consent to the search and a warrant was obtained. After reading the warrant Hernandez turned over his car keys. A manual search by the officers did not turn up any contraband in Hernandez’ vehicle. Detective Henry DelValle wiped the front passenger seat with a cocaine test wipe. The cocaine test wipe showed a positive test for a trace amount of cocaine.  Officers told Hernandez of their findings, returned his keys, and released him without further incident.

Upon arrival, reportedly at approximately 5:00 pm on August 10th, KWPD officers found the front garage style doors of Fire Station 2 on Angela Street to be closed and all exterior doors closed and locked.  Detective Mark Siracuse and Sgt Bernardo Barios used the intercom located on the side of the building to make contact with someone inside the building. Siracuse reports that “eventually” they received a response from Isaac Bixler.  Sgt. Barios asked Bixler who the commanding officer was and said they would like to meet with him.  “After some time” Bixler responded stating that he was having difficulty locating the Captain who might be downstairs. Siracuse reports that “eventually” Bixler opened the door for the officers and allowed them into the building, walking them through the garage bay area where no one was present.

Bixler informed the officers that Captain Jonathon Catena was the commanding officer in charge.  The group then went upstairs to the living quarters of Fire Station 2, where Bixler knocked on Captain Catina’s door informing him that there were some officers there to see him.  Meanwhile, Detective Siracuse states he went down the hallway knocking on the bedroom doors of the firemen who live at Fire Station 2.  According to reports, none of the firefighters initially responded to Siracuse’s knocking.  After confirming with Captain Catena that the men on duty “should be” in their rooms, Siracuse states he knocked on the doors again and the doors “slowly” opened.

Captain Jonathon Catena, Isaac Bixler, Brian Rose, Richard Gomez, Frank Abreu, and James Rogers were all present at the fire station and were asked to sit at the kitchen table and provide identification.

Officer Matthew Hansell, who was on scene in the parking area with KWPD K9 “Dexter,” reports he put the dog into service at approximately 7:30 pm after the station was secured. An exterior sniff of firefighters’ vehicles turned up an “alert” on one vehicle belonging to Brian Rose.  Rose told officers he had no issue with them searching his vehicle and he went downstairs with Detective Siracuse to unlock it.

No narcotics were found during the search of Rose’s vehicle.

Update: Brian Rose told The Blue Paper that the K-9’s handler [Hansell] stated during the vehicle search, “Looks like he [Rose] has dogs, with all that hair, that must have been what the dog hit on.” Rose also says that it is untrue that officers were required to knock twice on his bedroom door, “I answered my door upon first knock, within 3 seconds.”

The K-9 was then brought upstairs to conduct a search of the interior of the Fire Station 2. The K-9 alerted to several lockers, including the closed and locked locker of Korey Rodriguez. Rodriguez was called via cell phone and asked for consent to search his locker.  Rodriguez and all of the on-duty firefighters on scene consented to a search of their personal lockers.  A search of the building, including the lockers and common areas was conducted.

In addition to the lockers in bedrooms #2, #3, and #4, “Dexter” also alerted to the the presence of narcotics in areas inside the exercise room, electrical room and storage room. However, no narcotics were found during the subsequent search of the lockers and the other areas in the interior of the building.

Officers made contact with Captain Robert Franco at Fire Station 3, at approximately 4:39 pm on August 10th. He was asked to summon his men and to escort them to the front of the station. The men remained seated outside the building.

KWPD K-9 “Ben” was reportedly put in-service by his handler, Officer Thomas Anglin, at Fire Station 3 at 6:00 pm. “Ben” alerted to the presence of narcotics in the area of Engine 8’s rear passenger door.   Engine 8 was searched by Detective DelValle who found a small piece of green-leafy substance on the rear passenger interior step. The substance tested positive for marijuana but the amount was so small that after testing there was no longer a sufficient amount remaining for evidence collection.

KWPD K-9 “Ben” also alerted to the washer-dryer area of the laundry room at Fire Station 3 but a subsequent search of the area did not turn up any contraband.

On August 10th, the same day as the fire station raids, Arencibia was called into the Human Resources department by Daniel Blanco, Division Chief of Operations for Key West Fire Department.  Blanco had been alerted by KWPD to several text messages they had discovered between Arencibia and a suspect that members of the KWPD Special Investigations Unit pulled over on August 7th, and found in possession of cocaine.

Reports show that from July 5th through August 7th Arencibia allegedly exchanged multiple text messages with a suspect referred to in a transcript as “OP” [other person]. The messages contain multiple references to the purchase of pills such as Percocet [a mixture of oxycodone and acetaminophen] and hydrocodone and the use of marijuana. Blanco signed an employee disciplinary documentation form on August 13th after Arencibia failed to show up to the Human Resources department when summoned.  His termination was based on the following City Code of Conduct offenses:

Multiple messages were also allegedly discovered showing communications between the suspect “OP” and Arlen Fernandez between July 24 and August 4th.  The messages describe repeated purchases of cocaine, with money and drugs sometimes exchanged between the two by using the gas cap of Fernandez’ truck.  The final message shows Fernandez texting the suspected drug dealer: “Yo, I think I did enough cocaine yesterday to kill a large moose.”

On Tuesday, Fire Chief Michael Davila announced an internal reorganization aimed at improving the level of service at the department. He named Alan Averette the Division Chief of Operations and Danny Blanco as the Fire Marshal.

“Our entire department is committed to the community service we provide,” said Davila. “We will continue the process of restoring our great reputation for excellent service and earn the respect of our community.”

CORRECTION: The initial article stated that the suspected dealer “OP” [Other Person] was “arrested” on August 7th. However, personnel records, regarding the terminations of fire department employees provided by City spokesperson Alyson Crean, state only that the suspect, “OP,” was “pulled over” on August 7th at approximately 20:39 and “found to be in possession of cocaine.”  A search of MCSO website for all arrests dated August 7th did not turn up any suspects who were arrested specifically on cocaine charges that day. This article has been corrected to reflect that it has not yet been confirmed by The Blue Paper that the suspect “OP” was “arrested” on August 7th.