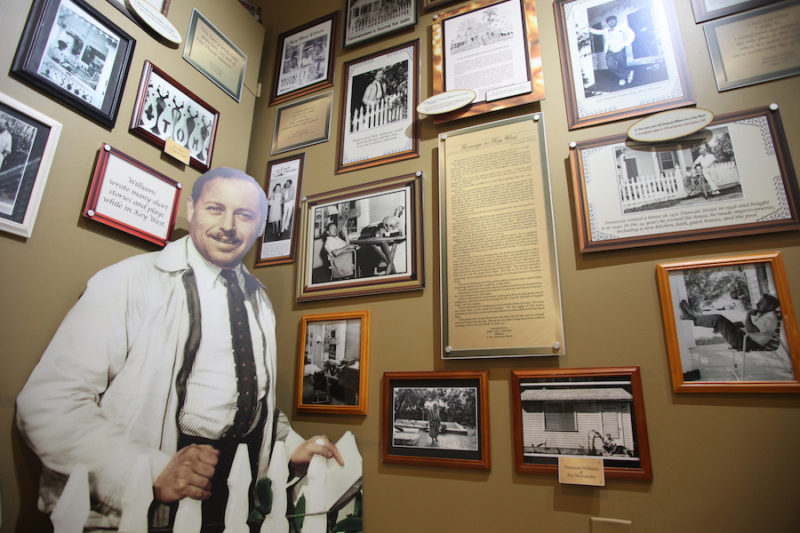 The Tennessee Williams Museum, 513 Truman Ave., one of four museums stewarded by Key West Art & Historical Society where locals can enjoy free admission on the first Sunday of each month, showcases highlights from the playwright’s life and work while living in Key West from 1941 until his death in 1983.

Round up friends and family or fly solo on the first Sunday of each month and check out the arts, history, and culture of your hometown – for free. Key West Art & Historical Society celebrates locals the first Sunday of every month with free admission to all four museums under its stewardship: the Custom House Museum, Key West Lighthouse & Keeper’s Quarters, Fort East Martello Museum, and the Tennessee Williams Museum, listed by TripAdviser as four of the 10 best museums in Key West and all open from 10:00am to 4:30pm daily except for Christmas.

Here’s just a sampling of what is happening now at all four museums:

Custom House Museum, 281 Front Street, the iconic four-story architectural “crown jewel” of Key West, and one of the finest examples of Richardsonian Romanesque architecture in the U.S.:

“Islands, Imagination and Instance: Florida Keys Folk Art,” Bryan Gallery, on exhibit through Sunday, January 6: Discover how folk artists Stanley Papio, Makiki, Mario Sanchez, Jack Baron, Papito Suarez, and others celebrated and expressed their cultural identity through community aesthetics, and view the paintings, sculptures, and works on paper that reveal how the flora and fauna (islands), the originality (imagination), and atmosphere (instance) of the Florida Keys have shaped them artistically.

“3 Weeks in Cuba: Walker Evans & Ernest Hemingway” on exhibit in the Custom House Museum foyer through October 10, features 12 images taken by Evans, considered one of the greatest photographers of his time, while on assignment in Cuba in 1933.

Ongoing: “Overseas to the Keys: Henry Flagler’s Overseas Railway,” second floor:Celebrating an important part of Florida Keys history and the incredible engineering feat that joined mainland Florida to Key West, outstanding elements include a railroad car that transports visitors back to the early 1900s, an oversized map of the Florida Keys, home video shot from the railroad in the 1920s, and related objects and ephemera from The Society’s permanent collection. Supported by the William R. Kenan Jr. Charitable Trust, Thomas Kenan, the Monroe County Tourist Development Council, and Lamont Harris.

Fort East Martello Museum, 3501 South Roosevelt Blvd, constructed to provide protection for Key West against the possibility of an enemy sea assault and now one of the finest preserved examples of Martello style military architecture in the United States:

“Stanley Papio – Junkyard Rebel,” permanent exhibit: Namesake of the annual Key West Art & Historical Society Papio Kinetic Sculpture and Art Bike Parade, Stanley Papio saw art where others saw junk. For more than three decades, the rebellious welder-turned-metal-artist transformed the “trash” in his Key Largo yard into extraordinary works of art, many of them comical and caustic commentary on neighbors and naysayers. Today, more than 100 sculptural objects and three-dimensional constructions are housed at the Fort.

“Ghosts of East Martello,” permanent exhibit: Pay your respects to Robert, the world’s most famous haunted doll, whose mesmerizing and eerie history began just after the turn of the 20th century when he was created by the Steiff Company and given to young Gene Otto, son of a prominent Key West doctor. Delve into the bizarre but true lore of Carl Tanzler, self-proclaimed Count von Cosel, and his passion for the beautiful, but unfortunately deceased, Elena Milagro Hoyos Mesa, with whom he lived until 1940, when he was arrested for grave robbery and possession of a dead body.

Explore the Lighthouse Keeper’s Quarters, now a museum restored to an early 1900s appearance with historic furnishings, photos and original artifacts depicting the life and times of generations of lighthouse keepers and their families. Climb the 88-step, circular, iron stairway of the 170-year-old lighthouse, owned by Monroe County and operated by Key West Art & Historical Society. Once a beacon for the island with its Fresnel lens that shined 11 nautical miles out to sea, the 48-foot tower also served to guide those on land.  Ernest Hemingway, who once lived across the street from the structure, was known to use it as a North Star of sorts to find his way home after nights of heavy imbibing.

A destination for Tennessee Williams enthusiasts and scholars, the exhibit showcases highlights from his life and work while living in Key West from 1949 until his death in 1983. The collection of historic, archival materials keeps alive the importance of his legacy and offers the largest collection of Williams’ memorabilia and literary artifacts available to the public. Displays include artist Jane Rohrschneider’s model of the playwright’s home at 1431 Duncan Street, first edition plays and books, images from the late local photographer Don Pinder, and original steps from the film adaptation of Williams’ play “The Rose Tattoo,” which was filmed entirely in Key West.