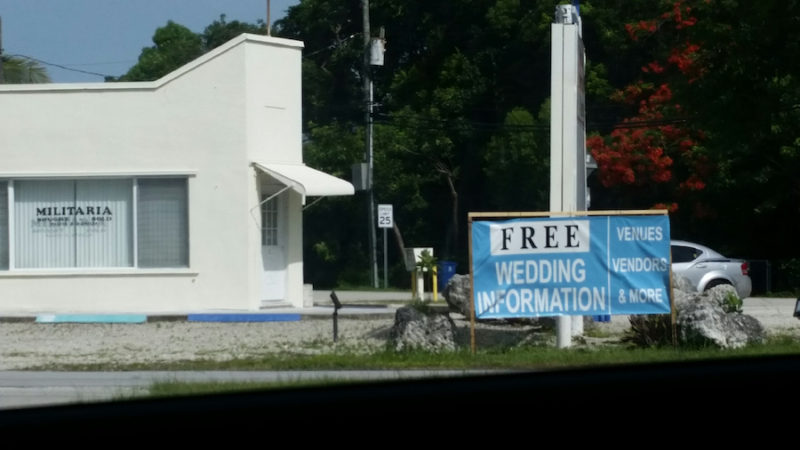 She’s an amazing photographer: photos of endangered birds standing on the flats, manatees drifting over the seagrass beds. I point to an extraordinary shot of the sunset. “Well, the place is called Sunset Cove,” observes Louise with a smile. Along with her husband, Louise Lindsay has lived within that secret corner of Key Largo for the past 30 years.

But like many others in the Keys, she now fears that the quiet peaceful days are over. Business, you see, has discovered their Paradise; specifically, the wedding industry. It is booming, and thanks to a bizarre loophole, practically unregulated.

In the not so distant past, observes Matt Douglas (in a 3-part report on weddings) a bride-to-be would start by dog-earing the pages of a few bridal magazines and the couple would visit various wedding venue options near home. Today a google search offers infinite possibilities and easy virtual exploration thanks to an abundance of photographs, videos, and customer reviews.

Places like the Key Largo Lighthouse Beach, near Sunset Cove, “nestled on an unknown secluded beach” and “built from the ground up as a pure wedding venue” are trying their hand at this 72 billion dollar industry.

The Key Largo Lighthouse Beach website indicates a total capacity of 300 people and according to one review the place was “almost completely booked for the entire year.” Pricing [for the venue alone] starts at $11,300 for 3-nights. 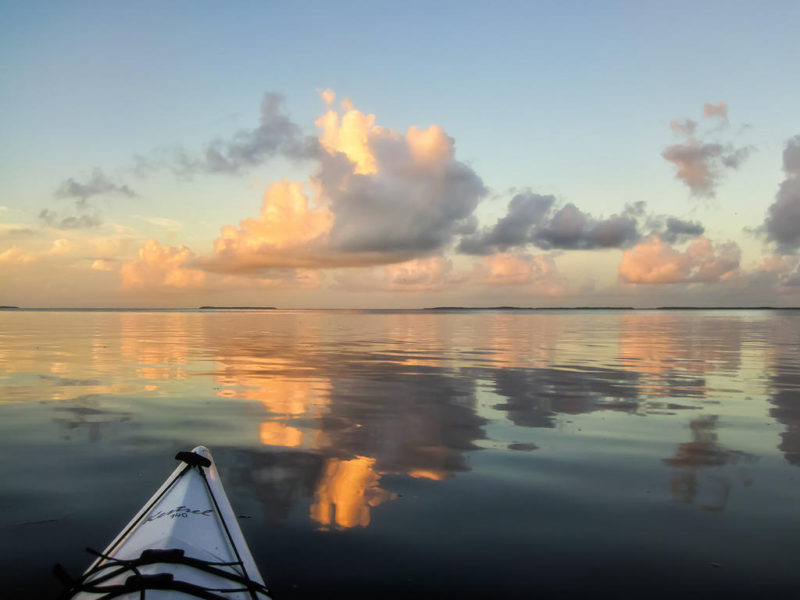 “Most people moved here to live in harmony with nature,” says Louise. She bought her dream house on the beach of Sunset Cove.

She asked Monroe County Senior Planner, Tom Broadrick, why commercial activity is being allowed in a residential area.  “He said that weddings are not considered businesses. They’re not considered “commercial” because [he said] ‘everyone can have a wedding’.”

However, when we reviewed County code enforcement files things got blurry.

Between October 2013 and July 9, 2014 code compliance pursued a case against Historic Shadow Point on Key Largo to put a stop to the wedding side of its activities.

On June 6, 2014 the code inspector wrote, “Mr. Gonzales [manager] indicated that he wanted to know what they would have to do to continue wedding business on site.”

On June 16th, he wrote, “Mr. Williams [Steve Williams, Assistant County Attorney] did advise them that the commercial use [weddings] was not permitted.”

Then, again, the code case notes show that on June 30, 2014, “the commercial use was discussed again and understood that it is not allowed (per discussion with Planning and with ACA Steve Williams).

So, at one point at least, County lawyers and planners agreed that a “wedding business” was “commercial” and was not permitted in residential zones.

Interestingly, Historic Shadow Point does still advertise itself as a wedding venue. They claim a capacity of up to 200 guests. [No sign of life from Code Enforcement.]

The Key Largo Lighthouse Beach destination wedding venue is a huge success. They have over 250 rave reviews. Yet both wedding venues are in zones where “commercial activities” are not permitted (SR and IS).

Does the County’s more recent position [weddings are “not commercial” and “anyone can have a wedding”] mean any property owner can now get on board with the online craze to host “destination weddings”? Whether in a dense residential area or on Tier 1 conservation land?

David McGraw, the owner of Key Largo Lighthouse Beach, points out that he and his wife, Mariana, purposefully located their business away from a crowded residential neighborhood. “Our closest neighbor lives 1/4 mile away,” he says. But he agrees that things are getting out of hand in the County:

“I know for certain from DJ’s that have been at our place and tell me that at other places they have fights with their neighbors, slashing people’s tires and people coming with leaf blowers – they’re so pissed off. But don’t think it’s just a wedding problem.”

He says he would favor some sort of licensing with the County: “Maybe a requirement to declare events in advance.” McGraw argues that if there was always a list of upcoming weddings then complaints against businesses would be very easy to investigate. Code inspectors would know when to show up at the next wedding. “And if you don’t post the wedding, then shame on us and revoke the license. That is what should happen,” says McGraw.

“Again, he emphasizes that he’s only heard of one complaint in the four years he and his wife have owned the Lighthouse property. “And we addressed it immediately,” he says.

Key Largo Lighthouse Beach has now purchased the property next door, allowing for 2 weddings to occur at the same time.

I’m happy for those people, it’s a beautiful place to get married,” says Louise, “But I do want to be able to sit outside in my yard and not find myself in the middle of some strangers’ wedding.

She sends us more photos, taken from her kayak and a recording of the “crowd cheering” echoing in the sunset.

“Next,” says Louise, “would be the DJ yelling into his mic: ‘Ladies and gentlemen! Let’s make noise for the dance of the father and the bride!!!!”

CLICK ON THE IMAGE BELOW TO SEE MORE PHOTOS OF

14 Responses to “The Wedding Boom: County Sees No Evil”