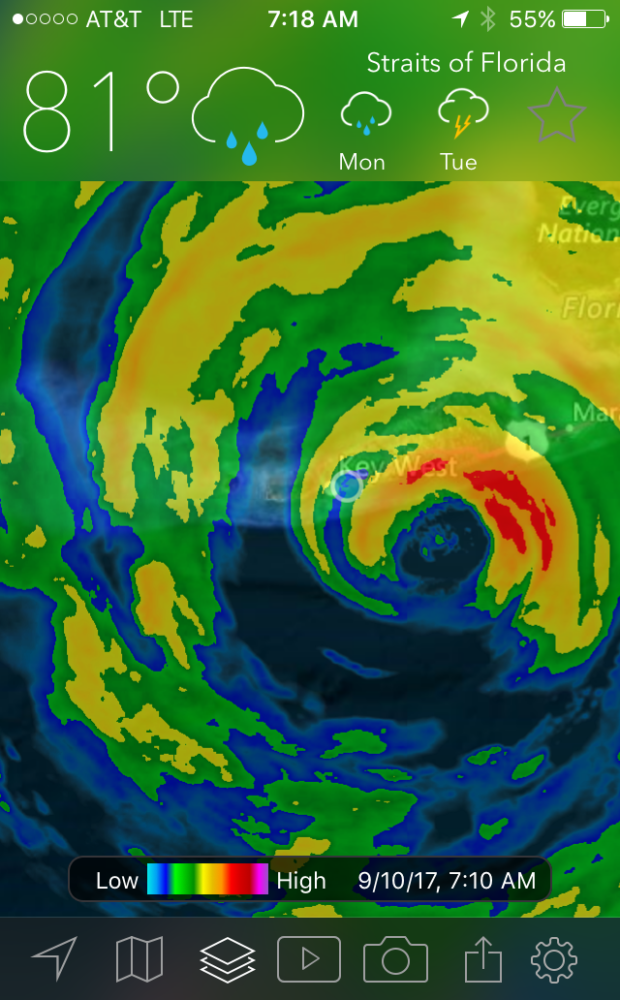 Cayo Hueso is what Key West was named by the Spaniards. It means small island of bones.

Amidst all the folklore of Indians, pirates, wrecks-a-shore, ghost stories, hauntings, Africans in slave ships and Bahamian settlers comes the mystery of how Key West, being just a little dot on the map, sitting in the middle of the ocean where a majority of its residents make their living, survives killer storms.

If I had a dollar for everyone who I’ve heard say, “Key West was lucky,” as they compared the amount of damage from Hurricane Irma to other parts of the Keys…

We were told the storm was of “catastrophic proportions” and we all had to run for our lives and those of us who evacuated were told nothing was going to be left when we returned.

But the island survived. How?

I began to wonder if the energies of nature that make up hurricanes conspired with the Maker of the Cosmos so that Key West would be minimally affected. Similar to when Charlton Heston, in the movie The Ten Commandments, instructed the Jewish people to cover their doorways with blood so that when the death angel came to take the 1st born of Israel it would pass them by. Thus the Jewish holiday Passover is observed every year and they retell the story of how God showed mercy.

Can prayers and rituals divert a powerful hurricane and keep it from decimating an island? “Yes.” says Chief Alapini Olaitan of Oyotunji African Village in Sheldon, SC.

A few years ago Chief Olaitan came with a delegation from the Oyotunji village and performed Elevation of the Iyo Egungun at the African Cemetery at Higgs Beach. The ceremony venerated the ancestors that are buried there and they were given 2nd burial rites. There were songs and dances to honor the ancestors return to the Earth. This was done in a series of ceremonies. It ended with placing offerings of fruits and flowers on a raft that was set out to sea to honor the unknown dead who had died in the Middle Passage during the Slave Trade. Ceremonies continue on the island of Key West as we conduct “A Day of Remembrance.”

According to the Chief, “Storms form off the West Coast of Africa; angry spirits seeking revenge on the captors of their ancestors. And so the spiritual work done at the cemetery, the bones of those Africans who lie in the graves are honored and the island protected.”

I contacted the National Weather Center on White Street and spoke to Stephen Chesser and asked him what happened as the storm approached Key West? He said, “Irma became a category 2 hurricane as it stayed on the coast of Cuba 24 hours. It emerged and intensified to a category 3 and was a category 4 when it made landfall. As the storm approached Key West, it wobbled from its regular course and turned a little to the west. Key West was twenty miles from the eye wall. They clocked category 1 winds with category 2 gusts at the weather station then. Category 2 winds with category 3 gusts hit the upper Keys. Closer to the storm center category 4 winds with category 5 gusts on the right side of the eye wall hit Big Pine Key and other smaller islands between here and Marathon. Eye-wall meso vortices (circulation embedded in the eye-wall that can cause tornadoes) missed Key West but hit Cudjoe Key, Little Torch, Big Torch, Big Pine Key and No Name Key.”

I was shown Doppler Radar images of the storm coming towards Key West by my friend Leo Curry, a local Conch, and it showed Key West in between the rain bands as the eye-wall went around. It was fascinating! He also told me the reef protects Key West from a really bad tidal surge.

Then famous Key West photographer Vidal, who is a native Conch, told me about the Grotto located on the grounds of St. Mary’s church on Truman Ave. We met there and I learned Sister Louis Gabriel 1879-1948, with the help of the citizens of Key West erected a Grotto to Our Lady of Lourdes and Bernadette to commemorate the 25th anniversary of her religious profession.

At the dedication on May 25, 1922, Sister Louis Gabriel, who had experienced the three major hurricanes of 1909, 1910 and 1919, prayed that as long as the Grotto remained standing Key West would be protected from the ravages of major hurricanes.*

Three weeks after her death on September 13, 1948, as if God confirmed her prayer, a powerful hurricane, the most severe since 1919 caused little damage. Since then Key West has been spared from massive destruction from a powerful storm.*

According to Vidal, who attended St. Mary’s school as a child, “This property was used as a hospital during the Civil War when men were dying of yellow fever. They had no way to embalm them so the nuns, out of love, would wrap them in whatever fabric they could find and give them a proper burial. Bones were discovered as the church was building a cafeteria. There is also a graveyard of the nuns on the property. This property is full of caskets so there is something sacred here.”

I had heard that people come to the Grotto when a hurricane is forecast and I asked Vidal what do they do? “When the hurricane is coming there are about a hundred people, (all kinds of people, not just Catholics) who take an action to come to the Grotto to hold hands and pray. They stand in the formation of the Rosary and pray for the city and the people.”  I asked him who they pray to? He answered, “They pray to God and they believe the Virgin Mary protects the Grotto and the island.” I asked if they light candles and bring offerings of flowers to the Virgin Mary? He answered, “Some people do but most people just come to pray.”

I conclude the island is definitely blessed and protected. Higher Powers, “Spirits”, cover it and let the storms pass.

3 thoughts on “The Spirits That Protect Key West”