Is the Florida Keys Aqueduct Authority taking on water? Two weeks ago an FKAA board member, Melva Wagner, was forced to resign. She had continued receiving benefits and payments as a board member even though she had moved away from her district almost a year ago.

This week it’s FKAA’s Chairman, J Robert Dean, who seems to be walking the plank. “I have reason to believe,” wrote State Attorney Catherine Vogel, after concluding her criminal investigation, “that James Robert Dean is attempting to vote illegally.”

The claim is somewhat more serious than in Ms. Wagner’s case. Dean has been voting in Key West elections, claiming to be a Key West resident. He was also appointed by Governor Bush to represent the Key West district on the FKAA Board of Directors.

In his 2004 application for board appointment he notified the Governor that he had moved to Key West.  He also changed his legal residence, on file with the Supervisor of Elections, to a small studio apartment he owns behind his Key West funeral home.

However, Dean and his wife have claimed a Homestead on their home in Key Haven for over thirty years and this week Chairman Dean had to admit to Chief Investigator Chris Weber of the State Attorney’s office that his real home is the one in Key Haven, located outside the City limits.

Chairman Dean may also be unlawfully sitting on the FKAA Board. The Florida Statute that created the Aqueduct Authority requires that each member reside in the district they represent. The districts mirror the five Monroe County Commission districts.

Is there something rotten in the Keys’ sewer and water system?

It is a legitimate question. Monroe County residents pay three times more for water and sewer services than their immediate neighbors in Miami-Dade County. In a one year period those extra dollars could add up to enough to pay for a thirteenth month of rent on an average one-bedroom unit in Key West.

FKAA was created by the Legislature in 1937. It’s not permitted to turn a profit – any excess revenue must roll back into the agency. And FKAA is raising more revenue every year. In 2000 it was collecting $26 million from sales of potable water to approximately 42,000 customers. Today, 2015, its customer base has only increased to about 47,000, but sales are now budgeted at over $47.5 million for potable water [with an additional $3.5 million in wastewater [sewage disposal] revenue].

This is the same water pumped directly from the ground at the same treatment plant in Florida City, named after the 26-year FKAA Board Chairman, Robert Dean.   The same water sent through the same pipes all  the way down to Key West. The most expensive water in Florida.

It’s easy to find criticism and suspicion about the top-heavy secretive organization.

One upset Citizen wrote to the State Attorney:

“Dean has been milking the system, playing politics too long… Why do certain politicians get homestead removed, pay fines & are removed […], yet others continue in their games and no one does anything about it, not the Governor, not the State Attorneys Office, not the Supervisor of Election, not the FKAA Board, not the Property Apprais[er]. What is going on…”

Another complaint was sent to State Attorney Dennis Ward:

“Can we all do this, live at our place of business in a different district than where we have our homestead? How has this been overlooked so long? Even the state attorneys turned a blind eye when they were sent a letter regarding Robert Dean District vs. Homestead. [Mark Kohl]”

Apparently, over the years, three successive State Attorneys: Mark Kohl, Dennis Ward, and Catherine Vogel were all urged to act on accusations that Robert Dean had misrepresented his legal residence.

It is unclear from the file whether Mark Kohl initiated any investigation. In 2009, Dennis Ward asked Chris Weber to investigate. Weber noted that Dean had a Homestead declared on his Key Haven home and he was obviously not convinced that Dean was living in the 300 SF efficiency on Bahama Street in Key West. A simple check of utility bills for the efficiency would have clearly established that no one was living there. Yet Weber was, apparently, overruled by then Supervisor of Elections, Harry L. Sawyer, who told Weber it was “common knowledge” that Dean was using the efficiency as his residence.

In 2001, Dean was not reappointed to the board. FKAA was going through a defining period. The Aqueduct was just getting jurisdiction over what would be hundreds of millions of dollars in grant funding to sewer the entire Florida Keys. However Governor Bush had chosen Elena Herrera for the Lower Keys District.

The next opening was the Key West district seat held by John Koenig. In 2004 Dean wrote to Governor Bush claiming that he had moved to Key West, he changed his voter registration address from Key Haven to 417 Bahama Street in Key West, and he applied for Koenig’s seat. In January 2005 he was appointed to the FKAA board to represent Key West. He was back in the game.

But last week, the issue of Dean’s legal status as the Key West representative on the FKAA Board resurfaced.

This time Chris Weber asked to visit the efficiency. He looked at the empty shelves, at Dean’s Key Haven address on his drivers license and a slew of other public documents. He got Dean to admit that he had likely only slept in the tiny apartment 6 times in the past six months and that, in fact, he primarily lives in Key Haven.

Dean claimed that in 2009 Harry Sawyer had found that he could legally use the Bahama Street efficiency to qualify as a voter in Key West elections. There are no documents establishing that Sawyer made any such determination and he was not questioned during the most recent investigation.

Last week when we interviewed Joyce Griffin, who was the assistant to Sawyer at the time, she said, “The only thing we did back then was ask Mr. Dean, ‘Do you live there?’ and he said yes he did, and that’s all we did.”

“The Supervisor of Elections gave the opinion that Mr. Dean was qualified. Mr. Dean has been relying on his analysis and has been voting. Consequently, up to now he has not known that he is an unqualified voter.”

There will be no criminal prosecution. Dean could have faced a charge of voter fraud, a third degree felony carrying a maximum 5-year prison sentence.

Catherine Vogel however did send a notice to Supervisor of Elections Joyce Griffin formally challenging Mr. Dean’s right to vote in Key West elections after she made a finding that he was improperly registered at the Bahama Street address.

Can Robert Dean continue to represent Key West on the FKAA Board? Having Mr. Dean release control of the Board would be the end of an era.

Robert Dean has guided FKAA through some of its most challenging times, installing a new water main and more recently multiple central sewage treatment and disposal systems. The Keys have been fitted with modern infrastructure and FKAA customers are furnished with award-winning potable water. Even during some of the most challenging situations, like after Hurricane Andrew, when the Florida City plant was without electricity for 28 days, water was still flowing clear and safe through the Keys.

Then there are the not so good things. In 1993 a Grand Jury was convened to investigate Dean’s decision to provide free water hook up to his friend Ron Keiter on Crane Boulevard on Sugarloaf Key [some 2000 feet of pipeline including over 1000 feet of 4” main that would have cost him $40,000]. He was also questioned on the decision to provide a highly discounted water mainline to an offshore island owned by the Spottswood family.

The Florida History Department at the Monroe County Library on Fleming Street has a copy of the tongue-lashing report that fell short of bringing criminal charges. There was no proof that money had changed hands in any of those backroom deals investigated by the Grand Jury.

The Grand Jury found that Dean had fired then FKAA Executive Director Steve McDaniel, who had squarely refused to bring free hookups to well-to-do customers [McDaniel, Dean claimed, had had an affair with a female FKAA employee, creating a “conflict of interest.”] McDaniel was replaced with Terry Dougherty who immediately brought 2000 feet of 4” water main to the Spottswoods’ island.

The FKAA Board is meeting at 10:00 am on September 25, 2015. Board member Cara Higgins wants the board to address the allegations that Mr. Dean has misrepresented his status as a Key West resident putting into question his eligibility for the Key West seat on the FKAA board of directors.

The FKAA board meeting is open to the public. 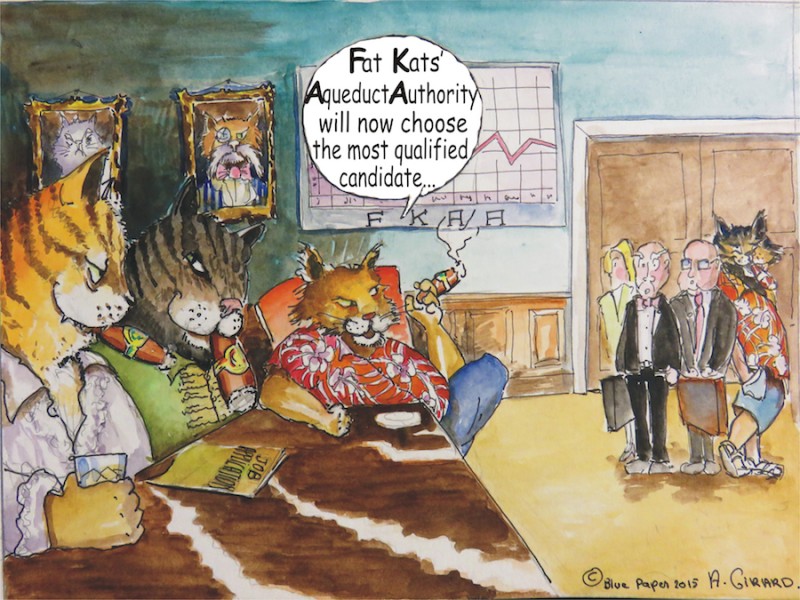 CORRECTION: The original version of this article incorrectly stated that State Attorney Catherine Vogel had concluded that J Robert Dean may have been unlawfully voting in City of Key West elections since 1980.  The records provided show a switch to the Bahama Street address from the Key Haven address in 2004, 37 days prior to Mr. Dean’s January 2005 appointment to the FKAA District 3 (Key West) seat.

The Blue Paper once again thanks Colby Fisher for his help with research for this article.