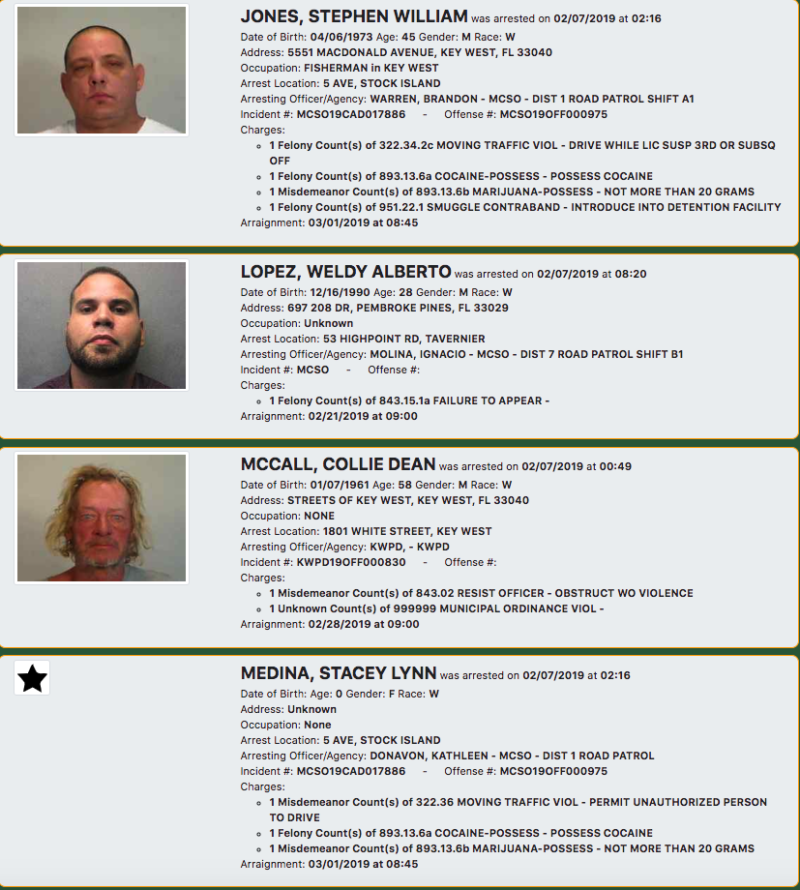 Programs Staff Assistant Stacey Lynn Medina, 43, was charged with possession of cocaine, possession of marijuana and permitting an unauthorized person to drive her vehicle.

Also arrested in the incident was Stephen William Jones, 45, of Stock Island. He was charged with possession of cocaine, possession of marijuana, driving with a suspended license (3rd or subsequent offense) and smuggling contraband into a detention facility.

Sheriff’s Office Deputy Brandon Warren was on patrol at 2:16 a.m. in the area of 5th Avenue on Stock Island when he spotted a Kia sport utility vehicle with a non-functioning brake light. Deputy Warren stopped the SUV at 5th Avenue and Cross Street. Deputy Warren noticed a lot of movement inside the SUV by two occupants, later identified as Jones and Medina. Jones was the driver. He stated he did not have a driver’s license due to it being suspended. Medina provided her valid driver’s license. Medina stated it was her SUV.

Deputy Warren detained Jones at that time. Medina provided insurance and registration and stated she knew Jones had no license, but allowed him to drive due to pain in her foot. Deputy Kathleen Donovan also arrived on scene. Deputy Warren noticed some loose marijuana on the floorboard of the passenger seat where Medina was sitting. Deputy Warren requested a K9 unit and a Key West Police K9 unit responded. The Key West Police K9 alerted to the presence of drugs in the SUV. A search of the SUV was then performed.

A notebook was found in the trunk. One of the pages contained names and dollar amounts. Deputy Warren surmised the notes and dollar amounts to be consistent with drug sales. Also located in the trunk were two field test kits commonly used by law enforcement to test and identify narcotics. One test kit was for cocaine and the other was for marijuana. Where and how those test kits came to be in the SUV is being investigated by the Sheriff’s Office. Both Jones’ and Medina’s cell phones were taken into evidence.

Jones and Medina were taken to jail.

While Jones was being searched at the jail, another crack rock was found in his possession that he didn’t previously identify.

Medina’s employment with the Sheriff’s Office was terminated Thursday morning.

Medina was hired in April 1999. She relocated in 2001 and returned to the Sheriff’s Office after moving back to Monroe County in October 2002.