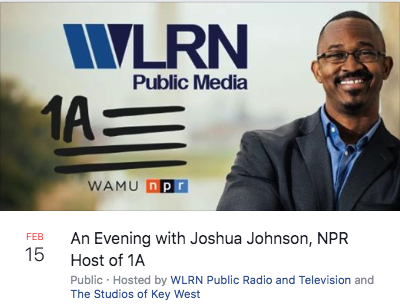 In partnership with The Studios of Key West, WLRN presents an engaging evening with one of public radio’s rising stars, Joshua Johnson,, host of the NPR radio program 1A. WLRN’s VP of News Tom Hudson and WLRN Keys Reporter Nan Klingener will moderate a lively conversation with Joshua about important topics with national and regional relevance. Audience participation will be welcomed. This special fundraising event is in support of independent journalism and WLRN’s commitment to its Southernmost News Bureau in Key West.

About Joshua Johnson and 1A:
Joshua’s roots belong to South Florida. Born and raised in West Palm Beach, he began his public radio career helping launch the regional news partnership between WLRN and The Miami Herald. Today, Joshua convenes a conversation about the most important issues of our time. With a name inspired by the First Amendment, 1A takes a deep and unflinching look at America, bringing insight to stories across the country and the world.
Produced by WAMU, 1A airs weekdays on WLRN Public Radio at 10 AM.

About WLRN Public Media:
WLRN Public Media is committed to being the most trusted source of information and entertainment in South Floridas diverse community. Licensed to the school board of Miami-Dade County, WLRN is best known for its award-winning public radio and television programs, but its services go well beyond the airwaves. It’s a complex media enterprise consisting of radio and television stations, www.WLRN.org and educational channels offering you a variety of high-quality programming and advanced learning services making WLRN a valuable public media source.