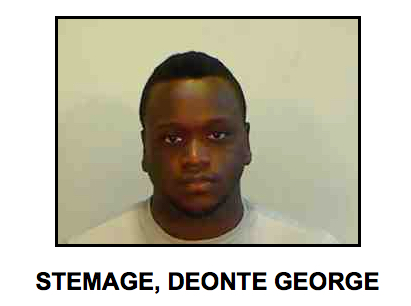 Key West Police Detectives arrested an employee of the Monroe County Sheriff’s Department today.  21 year old Deonte Stemage was arrested while working as a Records Assistant at the Monroe County Detention Center. He was booked into that same Detention Center on felony charges. Stemage was arrested for lewd and lascivious battery on a minor. Stemage allegedly sexually battered a 15 year old high school student, and sent sexually explicit texts and photos to her cell phone.

The victim’s mother called police after a Victoria’s Secret package was delivered to her daughter. She soon discovered pornographic pictures and sexually explicit texts on her daughter’s cell phone.

The victim allegedly met Stemage at Key West High School, where he volunteers and she is a student. Stemage was booked without incident into the Monroe County Detention Center.

Sheriff Rick Ramsay immediately terminated him from his employment. Stemage has worked for the Sheriff’s Office since December 18th, 2014.