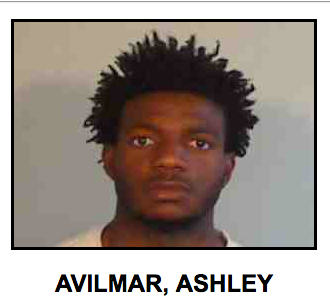 Deputies arrested a Stock Island man Wednesday afternoon for improperly exhibiting a firearm and for being a felon in possession of a firearm.

Sheriff’s dispatchers received reports just before 5 p.m. of a man waving a black colored revolver around at the Tom Thumb convenience store on Stock Island. Another caller reported shots fired at  a nearby trailer park on Maloney Avenue. Deputies Jenna Moeller and Freddy Rodriguez responded. The caller said the man with the gun was a black male wearing green shorts; he was reported to be with a black female with dreadlocks and the two were traveling together on a green three wheeled scooter.

Deputy Moeller spotted them on Maloney Avenue and pulled them over. A search of them both turned up a revolver tucked in the man’s waistband. It was a loaded .22 caliber Heritage Roughrider. Three rounds had been fired.

The man with the gun was identified as 20 year old Ashley Avilmar. A check on Avilmar’s name revealed he is a convicted felon and, thus, not allowed to carry a gun.

Deputy Rodriguez went to the Tom Thumb and watched surveillance video of the incident. The video showed Avilmar waving  the gun around.

During questioning, Avilmar and the woman he was with said they had a confrontation with another couple. Avilmar said he just wanted to let the other man know he had a gun.

A deputy on routine patrol on Stock Island arrested a man for possessing a number of different drugs Friday night.

Deputies Anthony Lopez and Russel Hull were doing a routine check at 6630 Maloney Avenue at 11 p.m. when they saw a Ford Explorer parked between two lots nearby with its interior lights on and two people visible inside. Deputy Lopez approached the vehicle to see what was going on.

He looked into the vehicle and saw several small clear plastic bags on the driver’s lap. When the driver realized the deputy was nearby, he swept the plastic bags into the space between the seat and the center console, as if trying to conceal them from view.

The deputies asked the occupants of the vehicle to get out of the vehicle so they could investigate further. They identified the driver as 35 year old Marcell Nance of Stock Island. There were also two women in the car, one of which had been sleeping in the back seat.

Upon questioning, Nance admitted to having drugs in the car. A search turned up 49 Oxycodone pills, four Vyvanse pills, five pieces of Alprazolam, 15 grams of crack cocaine, .8 grams of Heroin and a small amount of marijuana. Nance did not have a prescription for any of the controlled substances. Many of the illegal substances were packaged as if for sale.

The victim reported the incident May 17th, after consulting with her doctor. According to the victim, the incident took place about two weeks ago. She said they went for a ride in the suspect’s vehicle. She said they stopped on a dark, dead end street, While in the vehicle, she said he put his hands down her pants and penetrated her against her will. She said she repeatedly told him not to, but he did it anyway.

In interviews with the suspect, he also said she told him “no” a number of times during the course of the assault.

The case was assigned to Major Crimes Detective Bernardo Barrios. He obtained a warrant for the arrest of the 17 year old suspect, who was picked up today and charged with sexual battery.

NOTE: Information in the crime report above was provided by Monroe County Sheriff’s Office. Please remember all suspects are innocent until proven guilty.