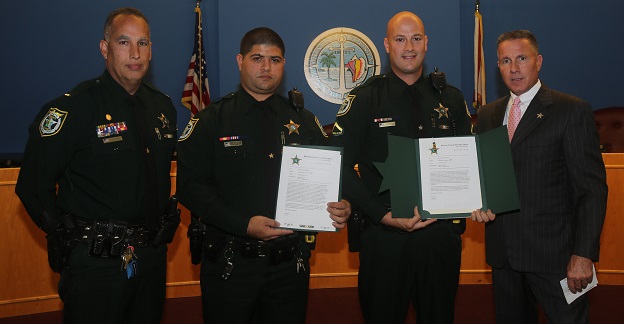 Deputies Jean Gonzalez, Ignacio Molina and Dave Campbell received the awards; Deputy Gonzalez was actually honored twice for saving two lives in recent months. Deputy Campbell could not be present at the ceremony to accept, but all of the award recipients will receive a letter of commendation and a ribbon to wear on their uniforms.

Deputies Jean Gonzalez and Ignacia Molina were honored for their swift and crucial actions when responding to a deadly incident which took place underground in a Key Largo neighborhood in January of this year.  While three people died in the incident, a fourth person – Key Largo Firefighter Leonardo Moreno – survived due in part to the quick actions of the two responding deputies, who performed CPR on him until paramedics arrived.

Deputies Jean Gonzalez and Dave Campbell were honored for their life saving efforts at Calusa Campground in June of this year. The two deputies responded to the area for a possible medical emergency. They found a man not breathing. The two performed lifesaving CPR on the man until paramedics arrived. The man was airlifted to a Miami hospital where he made a complete recovery.

“We are proud of these deputies for their quick actions in performing lifesaving CPR and saving these people’s lives,” said Sheriff Rick Ramsay. “Their actions are to be commended and we honor them today for their service to the community and to the Sheriff’s Office.”