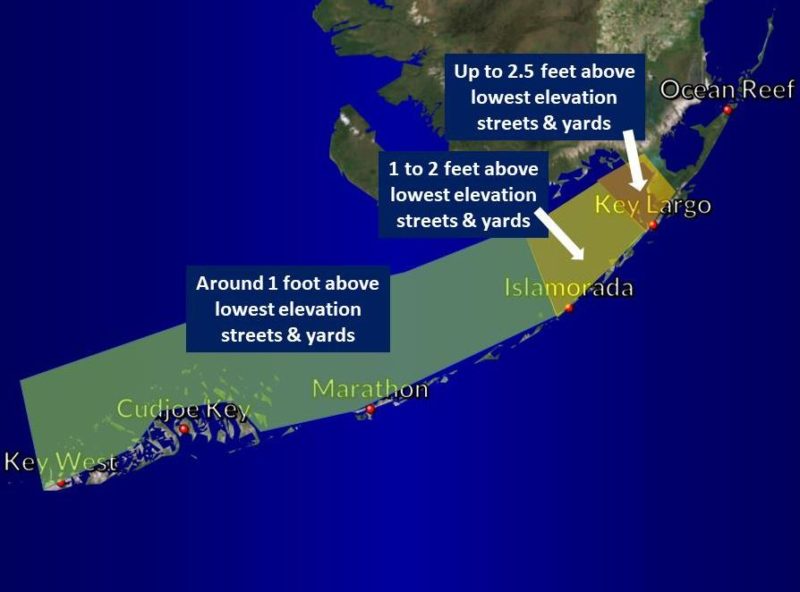 A gale warning is in effect for all #FloridaKeys coastal waters today and tonight.

A coastal flood advisory also is in effect for the bayside of the Upper Keys (Key Largo, Islamorada and Tavernier) today through Saturday morning.

A wind advisory is in affect today for all of the Florida Keys, with expectd west winds sustained at 25 to 30 mph and with frequent gusts of 35 to 40 mph, according to the U.S. National Weather Service (NWS).

While this morning’s low tide is making water levels not too impressive along the Lower and Middle Keys this morning, large swells (measured 19 to 22 feet at a few buoys this morning in the open Gulf of Mexico) are heading toward the west Florida Shelf.

These swells, in combination with the west winds and a steady rise in Florida Bay, will cause significant flooding on Bayside neighborhood streets in the far Upper Keys. The flooding is expected to be about 1 to 2 feet water depth over the lowest streets, yards and docks. The water levels will be highest in the Upper Keys this evening after sunset with only slow improvement through Saturday morning.

It also will cause some minor coastal flooding, similar to noticeable King tides, on the Gulfside/Bayside in the Lower and Middle Keys. This will occur as high tide approaches later this afternoon and early evening.

For those in the risk areas, you still have time to move any personal items, outdoor furniture and the like that could possibly flood to higher ground.

On Thursday night, with the exception of a couple strong thunderstorms out in the Florida Straits, the strongest thunderstorm-related wind gusts measured near the Keys was 45 mph.

Now is a good time to secure any furniture and other items outside the house and move items that possibly could flood to higher ground.

Please stay off the roads during the severe thunderstorms, when high winds can cause problems, especially while traveling on bridges.

At this time, total rainfall from tonight through Friday is expected to be generally 1 to 2 inches, with a few locations receiving higher amounts. While it is possible brief periods of street flooding may occur, the main concern with rainfall will be coincident with any strong to severe thunderstorms, which may damage homes and businesses structures still awaiting permanent roof replacements/repairs.

For additional information from the National Weather Service: