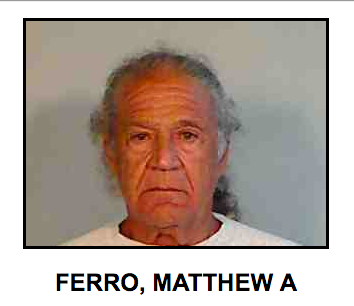 A Sugarloaf man was arrested Wednesday evening after he pointed a gun at a Big Pine couple on a motorcycle.

The incident began at about 6:15 p.m. when 75 year old Matthew Ferro, in his cream colored Cadillac pickup truck, reportedly passed Christy and Robert Velasquez who were traveling southbound on a motorcycle on the Seven Mile Bridge.

Deputies Jorge Prince and David Lariz were northbound on their way to the call when they spotted the cream colored truck southbound at the 23 mile marker. They pulled it over, holding Ferro while they investigated the report. Deputies found a fully loaded Ruger revolver on the floorboards of the truck. Deputy Prince then met with the victims, getting their account of events. After speaking with all parties involved, the deputies arrested Ferro. He was charged with three counts of aggravated assault with a deadly weapon and he was taken to jail.