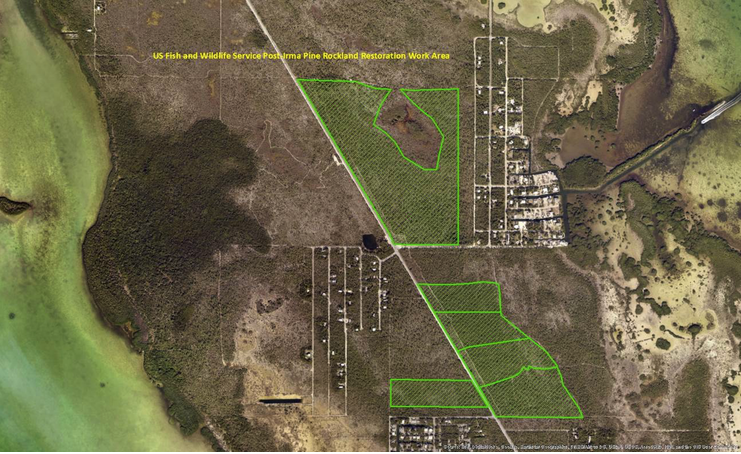 The U.S. Fish and Wildlife Service (USFWS), in partnership with the Institute for Regional Conservation (IRC), will conduct special post Hurricane Irma restoration work in the pine rockland habitats on National Key Deer Refuge the week of August 6th for a period of approximately two months. This work, completely funded through a National Fish and Wildlife Foundation grant for hurricane restoration of habitat and species, will involve fuels reduction and invasive plant control.  The goal of this work is to help restore important habitats which were impacted by saltwater inundation and downed and dead vegetation due to Irma. Through this restoration effort, the Refuge hopes to build a more resilient habitat for future hurricane events.

The work is within approximately 60 acres (shown below in green lines) and is north of Palm Avenue with areas both east and west of Key Deer Boulevard. This portion of the Refuge will be closed to all public access during the work period for safety reasons and the public is advised to stay clear of operations.

IRC’s personnel specialize in pine rockland ecology and wildfire hazard reduction and will be operating a skid steer tractor (similar to the one shown below) for this restoration work.  Some vegetation and vegetative debris will be mechanically and manually mulched, which also reduces fire fuels to minimize the risk of catastrophic wildfire.  Equipment operators will only be removing approximately 2-3% of the subject area vegetation in a mosaic pattern mimicking the effects created by a gentle prescribed or natural fire.  The end result will appear relatively unchanged to casual passersby. 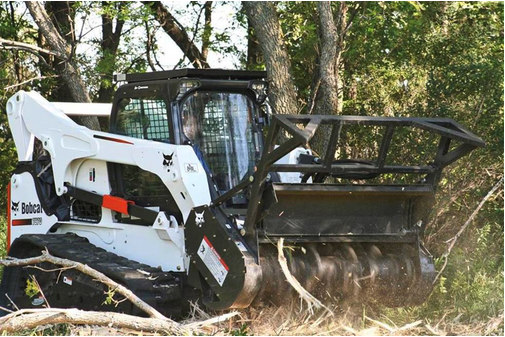 This type of land stewardship has been conducted before with success and this project was planned and funded prior to the 78-acre wildfire that occurred this past April.  It also compliments work done by the Florida Forest Service and USFWS on refuge fire breaks earlier this year. As vegetation thinning occurs, IRC personnel will also document and treat invasive non-native plants to prevent regrowth. Target species include Brazilian pepper (Schinus terebinthefolius), Australian pine (Casuarina equisetifolia), and leadtree (Leucaena leucocephala).  The project includes measures to minimize impacts to federally protected plant and animal species.

Only 2% remains of the imperiled South Florida pine rockland ecosystem and in the Keys it is home to important species such as the federally endangered Key deer, the Bartram’s hairstreak butterfly and the butterfly’s host plant, pineland croton. Restoration and maintenance of this fire-dependent habitat is essential to support these plants and animals. Fire suppression remains a primary cause for continued pine rockland loss resulting in habitat changes including succession of these rocklands into hardwood hammock species-dominated habitat. The vegetation thinning is one step commonly taken to mimic natural fire that can help slow plant community succession, contributing to a more healthy pine rockland habitat.

About the National Wildlife Refuge System

The National Wildlife Refuge System protects wildlife and wildlife habitat on more than 150 million acres of land and water from the Caribbean to the Pacific, Maine to Alaska.  Refuges also improve human health, provide outdoor recreation, and support local economies. Visit our home page at http://www.fws.gov/refuges/.

The mission of the U.S. Fish and Wildlife Service is working with others to conserve, protect, and enhance fish, wildlife, plants, and their habitats for the continuing benefit of the American people. We are both a leader and trusted partner in fish and wildlife conservation, known for our scientific excellence, stewardship of lands and natural resources, dedicated professionals, and commitment to public service.  For more information on our work and the people who make it happen, visit http://www.fws.gov/.

About Institute for Regional Conservation

A private non-profit organization, The Institute for Regional Conservation is dedicated to the protection, restoration, and long-term management of biodiversity on a regional basis, and to the prevention of regional extinctions of rare plants, animals and ecosystems. https://www.regionalconservation.org/