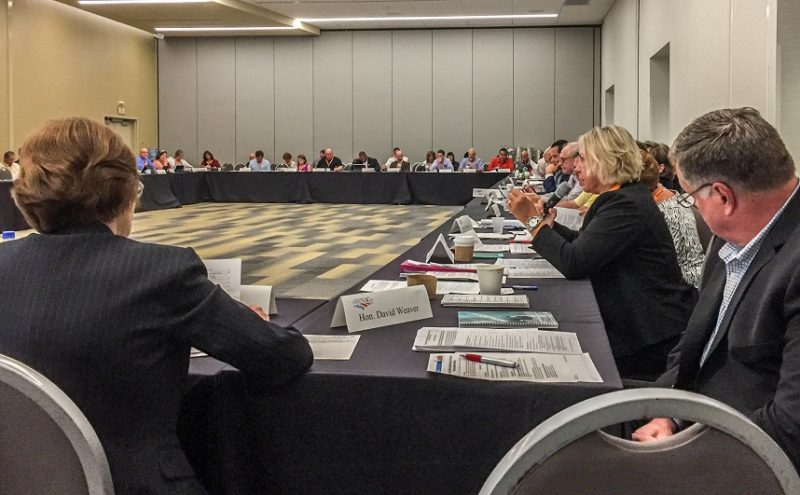 Monroe County Commissioner Heather Carruthers and Monroe County Legislative Affairs Director Lisa Tennyson are attending the 2017 National Association of Counties (NACo) Annual Conference with a mission to get the organization to adopt a resolution that supports responsible reauthorization of the National Flood Insurance Program.

The resolution, drafted by Monroe County, calls for reauthorization that prioritizes affordability, accessibility and sustainability as part of the national platform of NACo. The organization represents more than 3,000 counties across the United States.

The resolution states that with nearly 5 million NFIP policies nationwide, responsible reauthorization of the NFIP is essential to the stability of the real estate market and to the public’s trust in the program. Carruthers explained the resolution to the NACo policy steering committee.

This is the same resolution that Monroe County brought before the Florida Association of Counties Federal Committee. In June, the FAC Governing Board approved the resolution at the FAC conference in West Palm Beach.  The current authorization of the NFIP expires on Sept. 30, 2017.

While at the NACo conference, Carruthers and Tennyson also are attending several policy steering committees and caucus meetings, including the Public Lands Steering committee (PILT) and the Gulf Coast Counties and Parishes Caucus (RESTORE and Gulf-related issues).

At the request of NACo organizers, Carruthers sang the National Anthem before about 2,000 people at Saturday’s General Session of the conference, held at the Greater Columbus Convention Center. Carruthers spent several years as a profession singer, performing with choral ensembles from Milan to Manhattan to Mexico City.