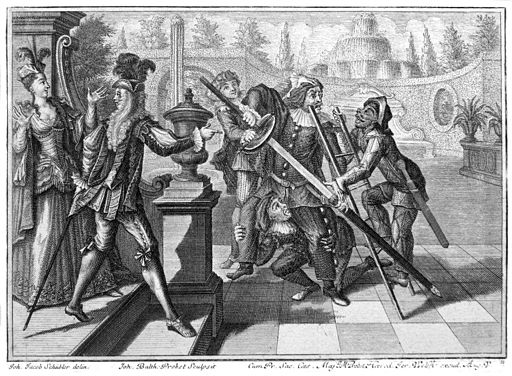 Русский: Comedie italienne (Arlequin, Scaramouche, Capitan, Mezzetin) (Photo credit: Wikipedia, this work is in the public domain in its country of origin and other countries and areas where the copyright term is the author’s life plus 70 years or less.)

In Italian  comic theater, Scaramouche is a clown, the boastful poltroon whose antics frequently bring him to grief. Presumably new White House communications director Anthony Scaramucci’s name is related  to that tradition.

His personality seems tailored to it as well: He’s off to a running start with the boast that he’s going to put a stop to White House leaks. How? “I’ll fire everybody, that’s how I’m going to do it. You’re either going to stop leaking or you’re going to be fired.”

That would be cool, if he meant it and if the people he pink-slipped wouldn’t be replaced. But even draconian measures like mass firings won’t stop the leaks.
In Washington information is currency and there will always be staffers who are willing to spend a little of it in pursuit of their own careers and political goals. A White House job is at most a four to eight year gig, and unless you’re the president himself (maybe even then!) the goal is to use it to move up in the world. A positive relationship with the press comes in handy on that front.

Also, a good many White House leaks are approved of, and perhaps even originate with, people Scaramucci can’t fire. That includes one Donald Trump, aka the Leaker in Chief, aka POTUS. Sometimes it makes sense to let a piece of information — for example, a trial balloon concerning a tentative policy shift — come out via leak instead of formal public announcement so that it can be quietly quashed in the event of negative public response.

Scaramucci will fail in his boast. The White House will continue to leak like a sieve. He’ll either get used to it and turn his attention to other matters, or get fired over it, or both.

That’s a good thing. It’s exactly what Scaramucci would want if he subscribed to the high school civics version of politics. Per that mythos, “the people” are boss and Donald Trump and Anthony Scaramucci are mere hirelings. Any information they have, we’re entitled to, and leaks are as good a way to get it to us as any.

Of course Scaramucci and other members of the political class don’t believe that for a minute. To them, “the people” are so many piggy banks to be emptied and cows to be milked in pursuit of power.

Fortunately for us, reality has come into alignment with the mythos. The age of government secrecy is over. If Scaramucci doesn’t believe me, he might want to ask Chelsea Manning, Edward Snowden, or Julian Assange.  As Jesus said, “there is nothing hid, which shall not be manifested; neither was any thing kept secret, but that it should come abroad.”

9 Responses to “Send in the Clown: Scaramucci versus the Leakers”