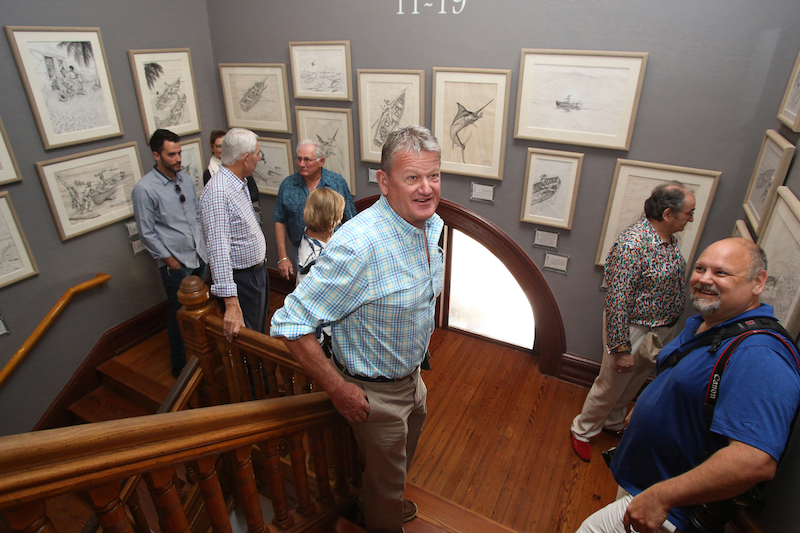 Famed maritime artist, scientist, conservationist and explorer Guy Harvey, whose evocative pen-and-ink sketches depicting scenes from Ernest Hemingway’s ‘The Old Man and the Sea’ are exhibited at the Custom House Museum, visited his works on Wednesday. The artist’s visit was a brief stop in Key West with jet-setting patrons Dave and Cheryl Copham, who are both the owners and loaners of the 59 exquisitely detailed pen-and-ink sketches which Harvey created as a teenager over the course of a year while attending boarding school in England. The works were first published in 1999 in the book ‘Santiago’s Finest Hour.’

A collection of 59 pen-and-ink illustrations by world-renowned artist, conservationist, scientist and entrepreneur Dr. Guy Harvey is now in display along the grand staircase of the Key West Art & Historical Society’s Custom House Museum, 281 Front Street in Key West. The exhibit is on loan indefinitely by Dave and Cheryl Copham.

Titled “Depicting Hemingway: Guy Harvey Sketches The Old Man and the Sea,” the exhibit is based on the tale of Santiago the fisherman and his battle with the marlin in Ernest Hemingway’s Pulitzer Prize-winning novel. The Old Man and the Sea was introduced to Dr. Harvey by his mother when he was 11 years old and it instantly fascinated him, becoming his biggest inspiration to become an artist and begin depicting marine life. The 59 pieces were drawn by Dr. Harvey over the course of a year while attending boarding school England as a teenager. According to Dr. Harvey, the range of media he uses today was all developed from this illustrative pen and ink style.

The Museum is open daily from 9:30 a.m. to 4:30 p.m. Admission is $10 for adults, $5 for children 6 and up, and free for children under 6. Monroe County students also receive complimentary admission with ID and all other students can enter the museum for $5. For more information call 305.295.6616 or www.kwahs.org/key-west-exhibitions

The Custom House Museum is one of four museums stewarded by Key West Art & Historical Society, all of which are listed in TripAdvisor’s “10 Best Museums in Key West.”

Guy Harvey is a unique blend of artist, scientist, diver, angler, conservationist and explorer, fiercely devoted to his family and his love of the sea. His childhood passion for the ocean and its living creatures not only inspired him to draw, but fueled a burning interest that prompted a formal education in marine science. Having graduated with honors in Marine Biology from Aberdeen University in Scotland in 1977, Guy returned home to Jamaica to resume his education, earning his Ph.D. from the University of the West Indies in 1984. Though he gave up a budding career as a marine biologist for that of a highly acclaimed artist, Guy has continued his relentless pursuit to unravel the mysteries of the sea, traveling the world to better understand the habits and habitats of the marine wildlife he paints.

and tune in to see Guy’s latest expeditions on YouTube at www.youtube.com/user/DrGuyHarvey.