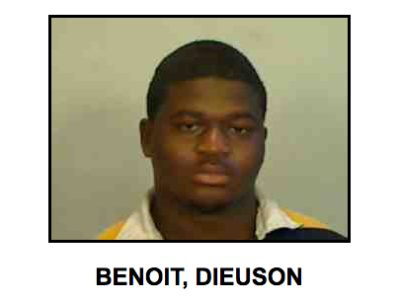 A Homestead man who allegedly burglarized a Key West pawn shop in 2017 and led deputies on a high-speed chase with a missing girl was arrested on Tuesday, June 12.

According to reports, on May 14, 2017, Dieuson Benoit, 21, and two other individuals burglarized a pawn shop in Key West while a teenage girl, who had been reported as a missing person since March 2016, waited in the vehicle.

The girl stated that the suspects allegedly parked in a dark area next to the pawn shop and jumped two fences to get in. When they returned to the vehicle, she stated in reports that they were “happy that they had just done the burglary,” and they “turned up the music and drove away.” The group would soon lead police on a high-speed chase that spanned nearly 57 miles.

Deputies first observed a Lexus SUV entering Big Pine Key traveling 67 mph in a 35 mph zone and activated overhead lights for a traffic stop. Benoit, who was driving the vehicle, sped up as they headed north, reaching speeds of 82 mph when other units joined in the chase. The SUV then reached speeds of approximately 144 mph.  MCSO deputies eventually stopped the vehicle at mile marker 86 using spikes, and the four suspects fled on foot.

Deputies apprehended one suspect, a 17-year old girl who had been missing from Miami Dade County, and also located two safes from the pawn shop (that were being used temporarily) containing $57,336.45, prescription pills, and two handguns.

The girl identified Dieuson Benoit and told police that she was staying with him in Homestead and that the two other individuals picked them up to go to the Florida Keys. On the drive down, she claims to have found out that the car was stolen from Hollywood, Florida.

She also stated that the men were wearing gold rings that they had taken from the pawn shop.

Two other suspects: Darius Lam and Andrew Mitchell have been identified but no arrests have been made.

We will update this story as more information becomes available. Information in this report comes from local law enforcement agencies. Please remember all suspects are innocent until proven guilty.