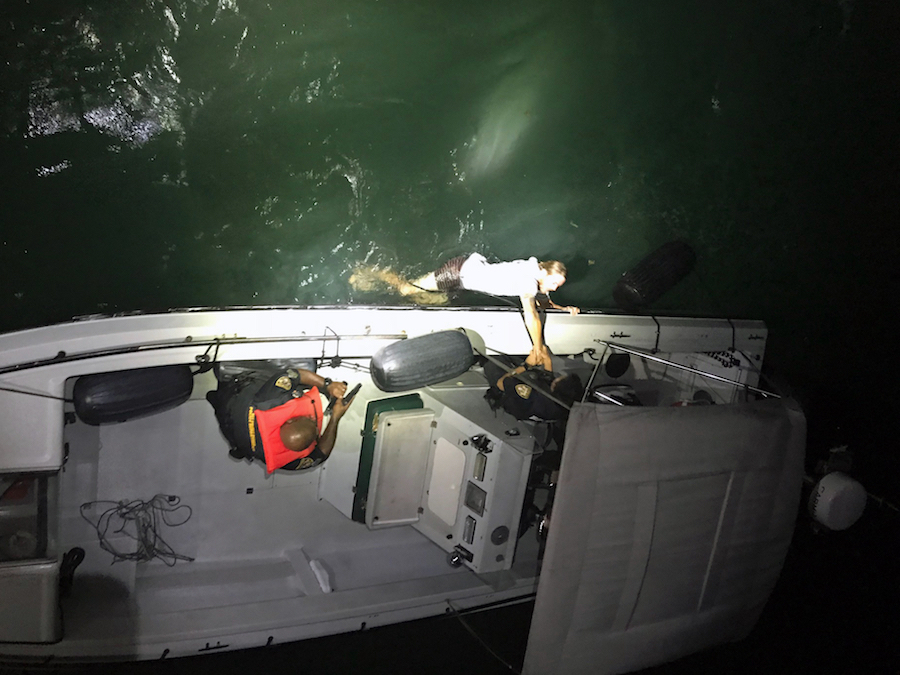 A 31-year-old Marathon man, who on his way to jail described his interaction with police as a ‘great story to share with friends and family,’ was arrested early Sunday after crashing a pickup truck and jumping into the ocean in an attempt to flee law enforcement.

Middle Keys Deputy Corbin Hradecky was on patrol at 3:52 a.m. when he saw a pickup truck exit the parking lot at JJ’s Dog House, a bar near 105th Street and U.S. 1 in Marathon. Shortly after turning onto US 1 the truck ran over the concrete median separating the north and southbound lanes.

Deputy Hradecky attempted to make a traffic stop. The truck initially appeared to be stopping but suddenly took off at a high rate of speed, northbound. Hradecky reported he pursued the truck at speeds sometimes as high as 105 mph while the truck, going even faster, continued to gain distance.

The driver, later identified as Nicholas James Tralka, nearly lost control of the pickup truck as it swerved erratically between both northbound lanes. Deputy Hradecky kept a visual on the truck and radioed Deputies Shaun Lones and Darrel Walraven to prepare tire spikes.

The pickup truck ran over the tire spikes deployed by Deputies Lones and Walraven near Mile Marker 60.5. The pickup truck continued northbound before crashing into a light post and the Duck Key entrance sign and finally coming to a complete stop after striking a palm tree

Tralka, who was alone in the vehicle, ran away from the crash ignoring Deputies who ordered him to stop. Tralka jumped over a seawall and into the water and began swimming south toward Toms Harbor Channel Bridge. Deputies lost sight of Tralka and called FWC for on the water help.

After about 30 minutes of searching through the mangroves, a good Samaritan who had been fishing on the bridge walked up to Deputy Hradecky asking if he was looking for someone in the water. He told the Deputy that a man was hiding underneath the bridge and was holding onto a piling.

Florida Fish and Wildlife Conservation Commission [FWC] Officer Carrol arrived on scene in a boat along with officers from Key Colony Beach.  Tralka was ordered to come out from beneath the bridge. Tralka told the law enforcement officers he was giving up. Key Colony Beach Police Officer Niemiec threw Tralka a rope from the FWC boat and Tralka was pulled aboard.

Tralka was taken to the dock at Duck Key Marina where he was arrested. He told Deputy Hradecky that he ran away because he’d been drinking and he was afraid. He also told Hradecky he was sorry, and he’d “F*cked up.”

Deputy Edward Swogger searched the truck and found three empty 100-ml Fireball© whiskey bottles and one full bottle inside the vehicle. Tralka’s eyes were reportedly bloodshot, watery and glassy; his eyelids were described as “droopy.” His speech was described as slurred and deputies noted a strong odor of alcohol. Tralka was taken to jail where his blood-alcohol level was recorded at .214. The legal limit in Florida is .08.

While apologizing again on the ride to jail, Tralka also reportedly bragged about his attempt to flee and said he was going to have a ‘great story to share with friends and family.’

He was charged with hit-and-run, fleeing and eluding, DUI, DUI with property damage and resisting arrest.