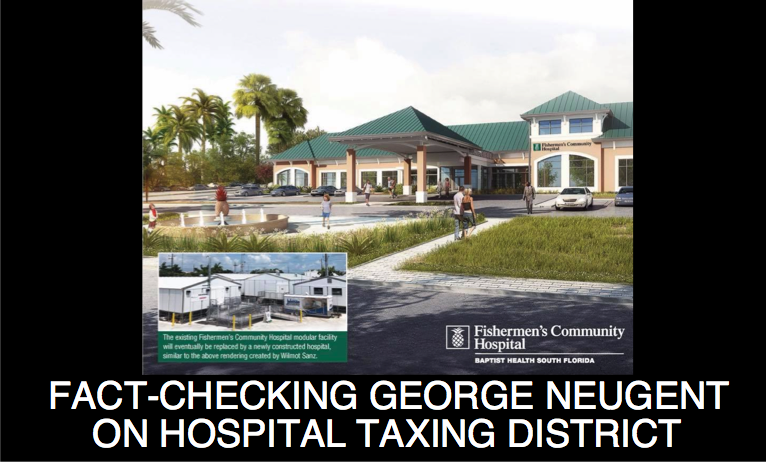 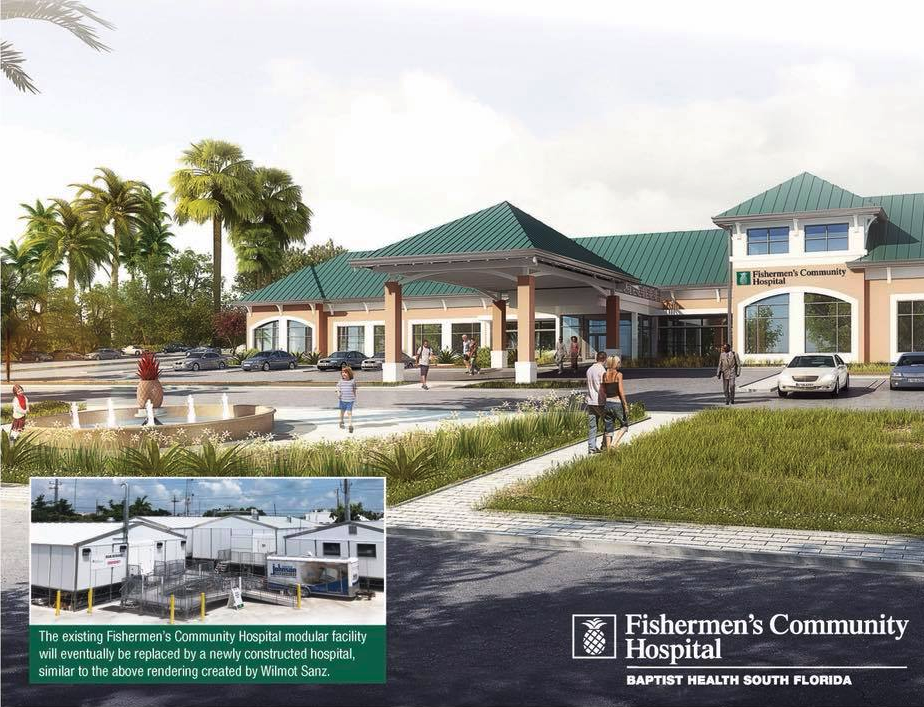 Monroe County Commissioner George Neugent spoke about the City of Marathon’s right to jump ship on their commitment to fund Fishermen’s Hospital on US 1 radio yesterday.

We contacted the County to obtain a copy of the “interlocal agreements between the Cit[ies] and the County.” After a few email exchanges, the Assistant County Attorney, Cynthia Hall, telephoned, stating

“I can assure you there is absolutely no interlocal agreement between the County and the cities of Marathon and Key Colony Beach” [regarding the Fishermen’s Hospital tax].

Here’s the official story:
The County, and the cities of Marathon and Key Colony Beach are in the process of creating a Middle Keys taxing district to help Baptist Health South Florida pay for the construction of a new Fishermen’s Hospital in Marathon. The tax is meant to cover $15 million of the projected total cost of $40 million.

The initial draft of the contract between the County and Fishermen’s shows a term of 10 to 15 years. While the cities have agreed to automatic yearly renewals of their consent to the tax, both municipalities voted themselves the right to jump ship and cancel their portion of the tax funding for subsequent years, unilaterally and without cause. (Marathon’s final vote on their consent ordinance is scheduled for September 11th. Key Colony Beach adopted theirs on August 9th.)

Will this right to walk away, even after the new hospital is up and running, be recognized in the contract with Baptist? After all, city councils can probably adopt any ordinance they see fit but our question is: Will the funding contract ultimately allow the cities to just stop paying without cause?

Section 3.2 of the draft agreement, provided to The Blue Paper by the County, specifies that the County will pay Fishermen’s a minimum of $375,000/a quarter ($1.5 million/year).

“County shall pay to Fishermen’s the amount of the greater of (a) Three Hundred Seventy-Five Thousand Dollars ($375,000) or (b) one-fourth (1/4) of the total amount of funds available from each annual tax levy…”

Failure to pay that amount is described as a material breach under section 5.3(c) of the current draft of the contract.

In other words, in theory the cities could try to make good on their self-proclaimed right to cancel their portion of funding of the deal, but in reality, if the County’s contract to fund Fishermen’s were signed as it stands today, Baptist would have the right, under section 7.3, to sue the County “in equity” for breach of contract for failure to pay and for attorney fees and expenses.

The cities of Marathon and Key Colony Beach represent over 79% of the tax funding that will be collected by the Middle Keys Health Care Municipal Service Taxing Unit (the MSTU).

What is really going on?

Public officials have been touting the reassuring yearly right to cancel the tax. But here’s the problem: They are referring to Florida Statute 125.01(q) which is designed to provide “indigent care” for periods as short as one year.

It allows local governments to, on a yearly basis, reassess whether the program – funding indigent care – is still desirable. It is not designed to protect municipalities who agree to finance a portion of a $40 million privately-owned construction project over 10-15 years.

Local officials and Baptist Health South representatives have all repeatedly admitted that this use of the indigent care tax provision in state law is only a scheme they’ve concocted to fund hospital construction without having to go to referendum.

“Article VII, section 12 of the Florida Constitution states that counties… [can issue bonds]… only when approved by vote of the electors in the MSTU.”

“No referendum is required… if the ad valorem taxes will be used for indigent health care costs.”

“Ultimately the goal of the community … is to get the hospital built. Paying for indigent care for ten years is a way to pay Fishermen’s hospital for something that is legal and supportable for the County to pay to a private charitable hospital.”

County Commissioner George Neugent and Marathon Mayor Michelle Coldiron rely on the fact the indigent care statute allows for a one-year commitment. It does. But the statute does not say they can exit a 15-year commitment after one-year without cause.

The effort to frame the funding of a private construction project using indigent care legislation has brought only confusion.

What is going to happen?

Assistant County Attorney, Cynthia Hall, pointed out that the current draft of the contract was written by Baptist Health South Florida attorneys. She says the County Attorney’s office will propose all amendments necessary to protect the County before presenting it to the BOCC.

“I can assure you that the $375,000 clause is not going to be in there,” said Assistant County Attorney, Cynthia Hall.

Opponents to the new tax have argued that the County should not try to get creative with multi-billion-dollar corporations, as the County will likely not come out on top. They claim the path is clear: the law requires a referendum and it should be worded to give taxpayers an ownership interest in the 40 million-dollar building they are paying for.

You can have a look at all of our coverage of the Fishermen’s Hospital tax by clicking HERE.