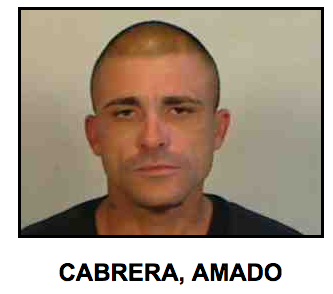 On May 27, deputies from the Monroe County Sheriff’s Office arrested Amado Cabrera, 33, for physically abusing an eight-month pregnant woman and punching her in the stomach. He also made verbal threats to the arresting officer.

According to arrest reports, the victim said that she received a text message from Cabrera asking to see his daughters for visitation. The visibly-pregnant victim drove to Cabrera’s residence on Stock Island and asked her daughters to stay in the car until she could speak with Cabrera. She stated that he immediately got in her face yelling at her and asking why she showed up. He stepped on her toe causing the nail to fall off, slapped her across the mouth causing a laceration, grabbed her arm, and started “punching her all over” – including her stomach. She also showed bruises under her upper right collar bone.

During transport to Monroe County Detention Center, reports state Cabrera made threatening statements toward the law enforcement officer to “remember his face,” that “everyone has a gun, remember that,” and that the officer “made a big mistake and doesn’t know who he’s messing with.”

Cabrera has a history of arrests including battery on a law enforcement officer (2013) when records state that he spit on an officer and was sentenced to imprisonment for 364 days. (See Report)

During a traffic stop in 2010, he and the female victim (from the May 27, 2018 incident) fled a police vehicle at high speed. In the report, the victim (who was driving) stated that Cabrera told her not to stop when the officer signaled, but finally did because their baby was in rear seat of the car. Cabrera was arrested for cocaine possession and admitted to ordering her to run from the police vehicle. She was arrested for resisting an officer without violence. (See Report)

There have been several previous calls regarding domestic violence, including in March 2010 when police responded to a call from the Lower Keys Medical Center where the victim was being treated for a broken nose. Witnesses stated that they saw her boyfriend, Amado Cabrera, punch her in the face after she was taking too long to get ready for a funeral they would be attending. However, the victim told the officer that she and a female down the street had a physical confrontation, and when pressed, she told law enforcement that she did not want to talk about what happened. The medical staff stated that her nose would have to be reset immediately or she would need an operation to fix it. Cabrera was arrested but no action was taken by the State because of insufficient evidence. (See Report)

Cabrera is currently being held at the Monroe County Detention Center, charged with aggravated battery, and for violation of a permanent injunction for protection against domestic violence issued in July 2016.

Information in this report comes from local law enforcement agencies. Please remember all suspects are innocent until proven guilty. We will continue to update this story as it unfolds.