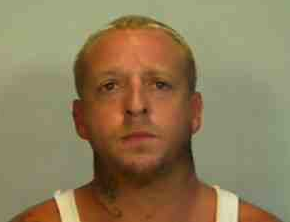 A 35-year-old Marathon man arrested on Aug. 7 for injuring a small dog was further charged with aggravated battery Thursday afternoon.

Middle Keys Deputy Daniel Hill was called to Fishermen’s Hospital on Aug. 6 in reference to a woman with injuries after an altercation at her residence. The woman told Deputy Hill that Chidester hit her multiple times with his fist during a fight over money. The woman stated she was outside by a bonfire when Chidester came outside and put the fire out with a fire extinguisher, leading to an argument.

The woman told Deputy Hill that Chidester beat her over the head and then destroyed the TV. The woman required staples to close the wounds to her head. The woman stated that when Chidester quit beating her, he picked up her miniature pinscher, “Penny,” and threw it down the stairs and off the porch — a height of about 10 feet.

Deputy Hill met with the woman the following day at the veterinarian hospital where the vet reported the dog had multiple fractures to its pelvis. The vet stated the dog may have suffered long-term nerve damage. The vet added the dog may be unable to urinate on its own and may require a catheter.

Chidester was stopped by the Florida Highway Patrol Tuesday night and was placed in custody in reference to the dog incident. The investigation into the woman’s injuries was ongoing at that time.

Chidester was previously arrested for domestic violence, on July 16 2016. The arrest for aggravated battery on a pregnant woman occurred after Chidester allegedly slapped his then girlfriend in the face and broke her $400 Gucci sunglasses. The woman was reportedly pregnant with his child at the time.  The State Attorney’s Office declined to file charges for the 2016 incident, filing a Memorandum of No Action with the Clerk of Court on August 19, 2016.

Chidester remained in jail Friday under no bail.