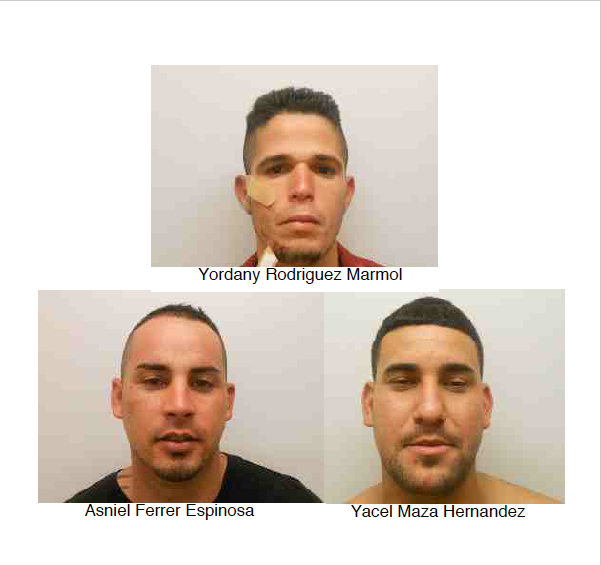 One man was airlifted to a Miami hospital for injuries he sustained in an altercation on 15th Street in Marathon just before midnight Wednesday. Several men were arrested after they attacked deputies attempting to investigate the circumstances of his injuries.

Deputies responded to reports of a fight and found the victim, 48 year old Ignacio Echererria Aguila, lying in the middle of the road. He had severe injuries to his face, including swelling, bruising and lacerations. Paramedics responded and transported him to Fishermen’s Hospital after which he was airlifted to the Ryder Trauma Center in Miami.

As Deputies Titus Hodges and Matthew Pitcher attempted to find out what happened to the victim, they were attacked by a number of men who were in the vicinity and may have been involved in the original altercation.

Deputies Jamie Buxton and Garrett Bragg responded to assist. When they arrived, they saw several men surrounding the deputies and yelling at them. The men refused orders to step back and calm down. The deputies began to restrain the men one by one as the men fought back, kicking and striking at the officers. The men were finally all subdued and handcuffed.

27 year old Yacel Maza Hernandez and 23 year old Asniel Ferrer Espinosa sustained minor injuries as they fought with deputies and were transported to Fishermen’s Hospital for medical clearance before being taken to jail. They continued their struggles on the way to and at the hospital, at one point knocking over a table that was attached to the wall in the waiting room of the hospital.

Detective Scott Ward responded to the scene and is currently investigating the original fight during which Echeverria Aguila was injured. His injuries are severe, but are not life threatening. Considerable evidence was recovered at the scene and more charges are expected in connection with that incident as well.