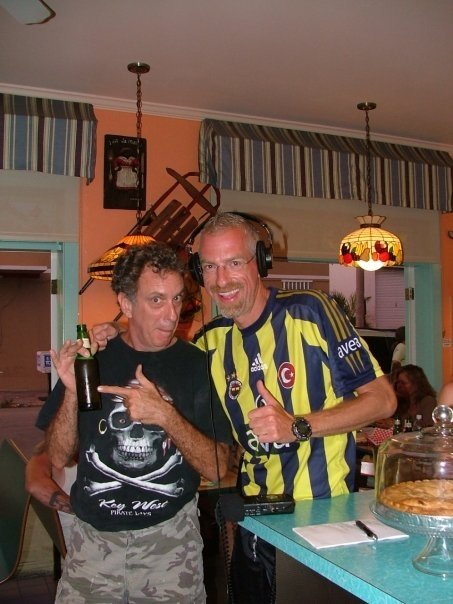 Local radio personalities and media educators Gary Ek and David Bethune are teaming up for a return to radio with their new call-in show, Keys Genius, on The X 104.9 FM, Sundays at 6pm.

Local Radio Personalities Return to the Airwaves After 8 Years

Local tech experts and radio personalities are joining forces to offer an innovative, call-in talk show which invites listeners to call with their most challenging technical questions. The show, titled Keys Genius, premieres Sunday, May 28th at 6pm on FM radio The X 104.9 with live streaming on YouTube.

Keys Genius is the brainchild of David Bethune, a longtime resident of Key West and serial entrepreneur. It’s also the new name for his tech consulting firm which provides computer and media services to local businesses. David’s co-host is Gary Ek, a radio engineer, audio producer, and local media personality. “As soon as David pitched me the idea, I knew we had to bring in other technology experts in town to give the program a well-rounded base. I reached out to several of my contacts and all of them were excited about the project,” Gary says.

David tell us, “Each program will feature one topic and a local guest with technical expertise in that area. We’ll discuss the most important and controversial aspects of the technology, then open the phone lines for callers. It’s a terrific format that Gary and I have used successfully in the past. And it’s an awful lot of fun.” Topics for upcoming shows include social media, cloud services, wireless networking, streaming music, and TV services.

Bethune and Ek previously collaborated on an internet radio project in 2009, known as Southernmost Radio Network. After meeting at KONK AM radio where Gary was the radio engineer and David was the host of the Tech Talk show, the pair left the terrestrial station to explore internet radio and digital capture techniques for live broadcasts. Right away, Gary and David realized they wanted to use new media to teach new media to artists, musicians, activists, and small business owners who wouldn’t normally have access to the technology.

Beginning with a live, internet TV show called Coffee College, Bethune and Ek taught classes in using social media for business and in producing and airing media for radio and TV. The in-person classes were taught in front of live students seated at computers at the Coffee Plantation on Caroline Street. “I’ll never forget the day we had a fire, live on the air,” says David. “I heard a ‘pop’ and smelled smoke, then turned around to see that the audio board was literally on fire. I don’t know how we did it, but Gary and I had the fire out in about 30 seconds while I narrated the whole thing for the TV and radio audience! Gary always has another audio board in a bag somewhere, so it didn’t stop the show.”

Ek recalls, “We were overwhelmed by requests from musicians and artists who wanted to learn how to run a board and do their own internet shows. So our second show, Midnight at the Oasis, gave novice producers a shot at running their own live shows — and, of course — promoting their own products and events.” The midnight show, airing seven days a week, had started as a volunteer effort but quickly turned into a full time job. After 80 episodes, the duo decided to call it quits. Even today, Gary uses some of the technology tricks and techniques they developed for live, remote radio with those earlier shows.

The new Keys Genius show will cover many of the same topics as the vintage productions. The last time Facebook was a topic, the show hit a record number of streams.  “So much has changed on all these platforms,” says David Bethune. Accordingly, Keys Genius’s first episode will focus on Facebook. “Social media is very different than we first started teaching it. It’s controversial, difficult to manage, and sometimes downright disturbing.” The Facebook episode will tackle the issues of privacy, censorship, and trolling on social media as well as how to keep up with the never-ending changes in the platform’s business advertising tools.

Local technology experts Robin Smith-Martin of Key West Computer Doctor, Kim Teal of Teal Technologies, and Kevin Bead of HTA have already signed on as scheduled guests with their own upcoming episodes. Also on board is Amber Debevec of Key West’s Finest, one of the island’s leaders in social media services and the owner of the rack card company that serves the tourist industry. “I’m excited to be part of the show,” says Amber, whose episode will focus on effective use of social media for business promotion. “These are the kind of questions I get asked every day and it’s a good opportunity for people to call and get some answers for free.”

The Keys Genius radio show will air every Sunday from 6-7pm, beginning May 28th. Listen live on The X 104.9 FM, stream audio from http://thexkeywest.com, or watch live video from the Keys Genius website at http://keysgenius.com. Keys Genius provides same day, on-site technical support and business consulting services in Key West. The X 104.9 plays The Music of the Keys and is heard from Marathon to Havana, 24 hours a day.