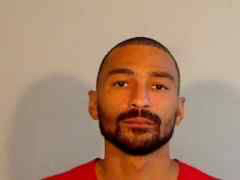 A tip from a concerned citizen led Key West police to the man, who was riding a scooter with an assault rifle, a pistol and two hundred rounds of ammo hidden in a guitar case and a military styled backpack.

Shortly after midnight Sunday, a man approached a Key West Police officer, telling him a man was carrying an AR-15 and riding a yellow scooter. That man turned out to be Tristan Bland.

Police issued a Be On the Look Out, and Bland was pulled over on lower Duval Street. A quick check showed that Bland’s driver’s license was suspended.

When questioned, Bland reportedly admitted he was carrying the weapons. He told officers he possessed a concealed carry permit, however, the officers soon learned that was untrue. In fact, the investigating officers discovered that Bland was under a temporary protection order which prohibits him from possessing a firearm or any other weapon. Further investigation revealed that the guns are not registered to Bland.

Inside the guitar case and the backpack, police discovered a .223 AR style rifle and a .9 mm Glock pistol. They also found approximately 200 rounds of ammunition, numerous magazines for both weapons, knee and elbow pads as well as a tactical vest.

When Bland was being placed into handcuffs for knowingly operating a motor vehicle with a suspended license, he threw his keys and three baggies on the ground which later field tested positive for marijuana.

During the subsequent search of the scooter Bland had been driving, officers discovered more paraphernalia associated with drug trafficking as well as $1900 in cash.

Bland was transported to the Monroe County Detention Center and charged with several felony and misdemeanor charges including obstruction without violence, possession of firearms while under a domestic violence injunction, driving while license suspended, two drug-related felony charges and for possession of drug paraphernalia.

His 2012 conviction stems from an incident that occurred in October of 2011, when Bland was arrested for firing four rounds from a .22 caliber AR styled rifle outside of Wingmaster’s restaurant on Truman Avenue. The restaurant was open and occupied at the time. Detectives believed he was shooting at someone he’d been arguing with earlier. The shots missed and struck the building. No one was injured.

“We like to think we’re a small town,” said Police Chief Donie Lee, “but we’re not immune to the rash of gun violence sweeping the nation. We need to be vigilant. If you see something, say something.”

Note: Please remember all suspects are innocent until proven guilty.