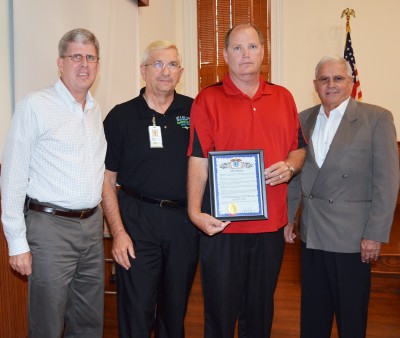 The City Commission, along with a packed chamber, gave a long and solemn standing ovation last night to Key West Transit driver J.B. Stayton for his professionalism and safety. Stayton was awarded a commendation for his role in keeping his passengers safe and for rendering a quick response in the face of a horrific accident on February 25th on the 7-Mile Bridge.
Stayton was driving the Lower Keys Shuttle south on the bridge in a rare and heavy fog when a fatal accident occurred just a few yards in front of the bus. An oncoming car crossed the center line and hit another car head-on. The car that had crossed over the center line came to a stop directly in front of the bus. Stayton was able to stop the bus just a few feet from the wrecked vehicle without any harm to his passengers.
“With calm authority, Stayton protected and comforted passengers, followed every safety protocol, and provided assistance far beyond the typical daily duties of a bus driver,” reads the commendation.
Stayton was able to quickly and safely stop the bus, calling immediately for emergency responders. He ensured his passengers were safe, then provided vital information to emergency dispatchers and rendered what aid he could to the crash victims.
“This was an unbelievable response to an immediate emergency situation,” said City Manager Jim Scholl, who viewed the on-board cameras and was able to see first-hand Stayton’s professionalism. “We’re really proud of that, and it shows the quality of people we have working for Key West.”
“As a veteran of the U.S. Marine Corps,” reads the commendation, “and as an Aide-de-Camp for the Honorable Order of Kentucky Colonels, J.B. Stayton has surely demonstrated courage and compassion throughout his life, but for this instance, the City of Key West would like to express special recognition for his bravery.”