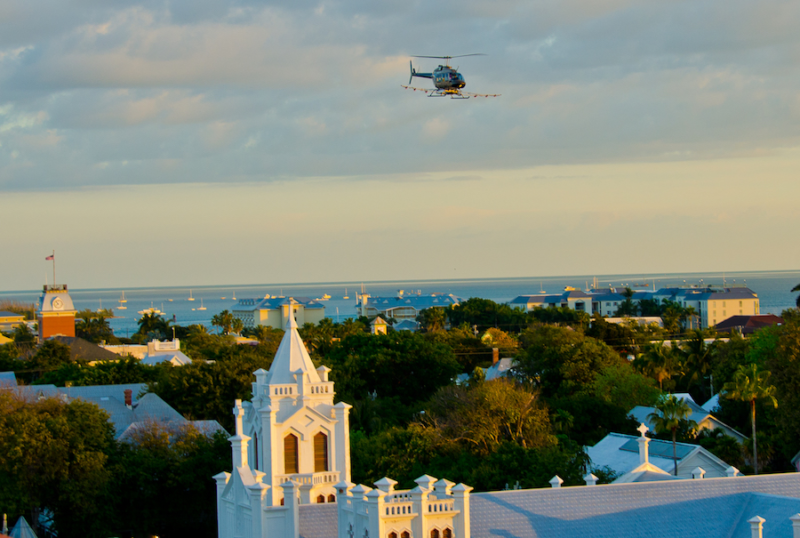 During 2009-2010 mosquito seasons over 100 cases of Dengue Fever were confirmed in mostly Old Town Key West, more cases probably went unconfirmed. The previous Florida Keys Mosquito Control (FKMCD) director Ed Fussell had managed mosquito control for the US Navy for decades. He later managed mosquito control for the entire State of Florida before coming to FKMCD. He has been the past President of the Florida Mosquito Control Association as well as the nationwide American Mosquito Control Association. He reviewed a number of solutions for this outbreak. He considered testing the GMO solution (Genetically Modified Organisms – sterilized mosquitoes) only if the outbreak became more severe, or if normal mosquito control efforts were unsuccessful. He viewed the GMO solution as very unmanageable and impractical and felt that, used by itself, it would not succeed.

This happened during a real outbreak of a deadly disease – not a potential outbreak. Director Fussell just didn’t feel that starting a program of raising and releasing millions of GMO mosquitoes – and continually releasing them FOREVER – was a practical long term solution.

He opted for a combination of technology and old fashion mosquito control practices. He began a program of liquid aerial larvicide that FKMCD had used successfully for years in a dry granular form. He began aerial spraying over portions of Key West and added 4 new inspectors to increase the number of home inspections.

At the beginning of the 2011 season we were inspecting every home in Key West at least once every 30 days – more often in the hot zones. We conducted aerial larvicides every two weeks. We partnered with the Health Department for an extensive citizen outreach and education program and published a weekly color coded map report in the Citizen showing zones of concerns. Together it worked. In 2011 there were no reported cases of Dengue Fever in Key West.

The current interest in the “GMO Solution” is the brainchild of FKMCD Director Michael Doyle, who replaced Ed Fussell in 2012. Doyle previously managed a small lab at the Center For Disease Control (CDC). He had very limited management experience prior to taking over the FKMCD.

Director Doyle along with the FKMCD Board of Commissioners began drastically cutting the FKMCD budget and dismantling the program put in place to control aedes egyptii mosquitoes. The total number of inspectors was reduced by 20% and the number of inspectors in Key West was reduced by 30%. At the same time our aerial larvicides of Key West were reduced. The outreach and education program basically evaporated. Today we are lucky to inspect houses in Key West once every 2-3 months – or only 2-3 times during an entire season. Employee morale plummeted, the counts of aedes egyptii mosquito began to rise..

Director Doyle loved the GMO solution by Oxitec. It was a perfect fit for his laboratory and research background. After almost four years Director Doyle is close to attaining his goal at the expense of FKMCD and everyone else in Monroe County. He has become the Don Quixote of mosquito control, ignoring real solutions for a mythical GMO crusade.

Director Doyle wants to be “the first” to use GMO technology in the US, and get his name in the annals of mosquito control, publish a scientific report, and hopefully move on to bigger and better opportunities. The problem is FKMCD and Monroe County will have to clean up this mess of lawsuits, terrible public relations (Jurassic Park Island, etc), and we also have a growing population of another disease carrying mosquito the albopictus (aka: Asian Tiger) which can also carry Dengue and Zika virus) for which the GMO solution will have no effect. The Asian Tiger population is increasing on several Keys.

The problem with the GMO solution is Director Doyle and the members of the FKMCD Board of Commissioners that have supported the huge budget cuts and allowed the Doyle/Quixote GMO crusade to continue. They should be held accountable this November.

Two of the Commissioners want to go a different way and find a new Director. Commissioner Bill Shaw and Commissioner Steve Smith voted to not renew Doyle’s contract.

Three other Commissioners steadfastly support Doyle and the GMO program. Commissioner Phil Goodman stated he had a mandate from the voters to conduct the GMO testing program. Commissioner Jill Cranney-Gage has given Doyle excellent performance ratings and stated her constituents in Key Haven love the testing idea, all evidence to the contrary in both cases. She has referred to members of the Keys Environmental Coalition saying “They come, they scream, and they leave” (meeting April 21, 2015). Commissioner Tom McDonald seems to blindly rubber stamp any budget cut and even more blindly supports Director Doyle.

Ralph dePalma retired from the FKMCD in 2014. He ran the IT data collection systems.

One Response to “Guest Editorial: The Don Quixote of Mosquito Control”