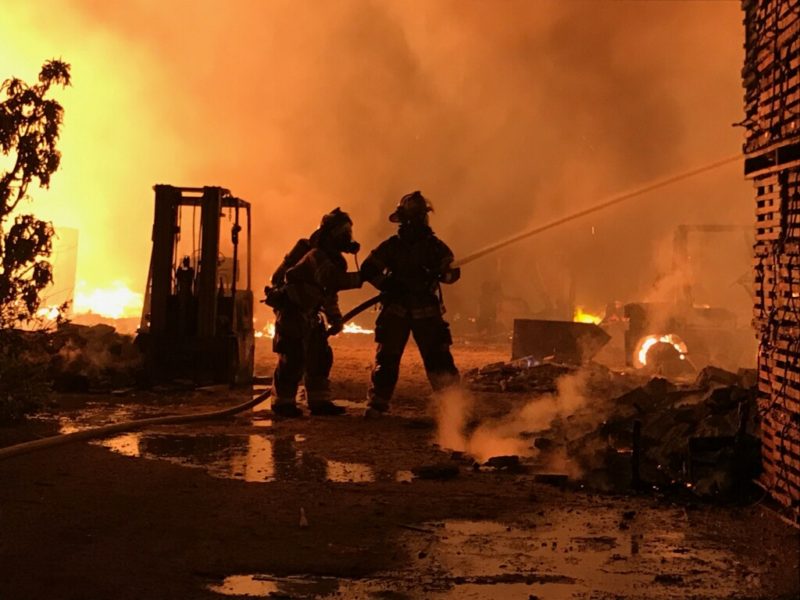 Traffic on US 1 was stopped for several hours in both directions early Monday as fire raged, engulfing a home, several boats and a large collection of lobster traps in a Marathon marina located between Porky’s Restaurant and the Seven Mile Grill, bayside near the Seven Mile Bridge.

Sheriff’s deputies on patrol were the first to notice and respond to a fire.

Deputy Seth Hopp was driving southbound near 15th Street at 2:35 a.m. when he saw billowing black smoke coming from Vaca Key Marina behind Porky’s Restaurant in Marathon. He called the fire in to Sheriff’s dispatchers and pulled into the parking lot to investigate.

He heard an explosion and began running toward the fire to make sure no one was in the area. As he ran toward the fire, he heard several more explosions which he said sounded like they might have been propane tanks.

Other deputies arrived, including Deputies Matthew Cory, Daniel Hill and Ian Douthirt. They all began checking and evacuating residences in the area south and west of the fire. At this point, Deputy Hopp said the fire had already consumed several vessels and a large portion of the trap yard on the property.

Deputies began moving boats that were closest to the fire, relocating them away from fire danger. They were able to save all the vessels that had not already been consumed by the fire.

Fire rescue was on scene fighting the fire and asked deputies to help clear an area in an effort to stop the fire from advancing. Using fork lifts, deputies were able to move the lobster traps which were not yet burned and this helped firefighters with bringing the fire under control.

“The traps were stacked 18 to 20 feet high,” Monroe County Fire Rescue Deputy Fire Marshal Craig Marston said. “The [commercial] lobster fishermen were getting them ready to put in the water the first of August for the new season.”

“We all – deputies and firefighters – worked extremely hard to keep this fire from spreading further and to keep anyone from being injured. The teamwork shown on the scene was impressive and I commend everyone for their hard work and dedication to the job of keeping the community safe,” said Sheriff Rick Ramsay.

Fish and Wildlife Conservation Commission, the U.S. Coast Guard and Sea Tow, also responded by water and assisted in the effort to save property from the fire. Florida Keys Aqueduct Authority and Florida Keys Electric Coop assisted with water and electrical issues. Florida Highway Patrol also helped with traffic issues. The American Red Cross responded and is helping those individuals whose residences were damaged or destroyed by the fire.

Because crews had to run fire hoses across the highway, U.S. 1 was closed in both directions for about four hours. The fire was contained about 5:30 a.m., with a loss of about 10 percent of the lobster traps, Johnson said. The highway was fully reopened to traffic shortly before 8 a.m., officials said.

Deputies Seth Hopp and Orey Swilley moved an estimated 8-10 vessels out of the path of the fire. Deputy Matthew Cory operated a forklift to move lobster traps out of the way of the fire.

The cause and the origin of the fire is under investigation. In addition to the Marathon Fire Marshal, the State Fire Marshal and the Bureau of Alcohol, Tobacco, Firearms and Explosives (ATF) are investigating due to high monetary value of the loss.

Note: This article has been updated periodically throughout the day as new information has been provided by Monroe County officials. 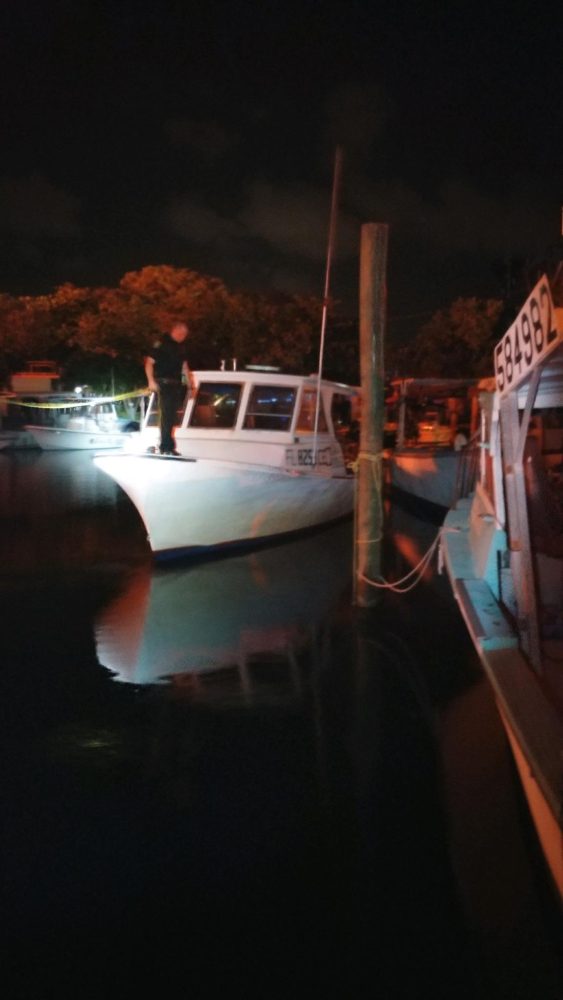 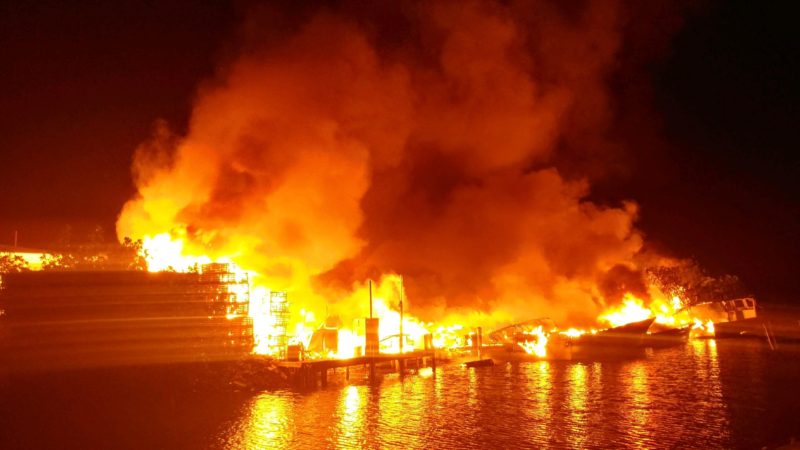 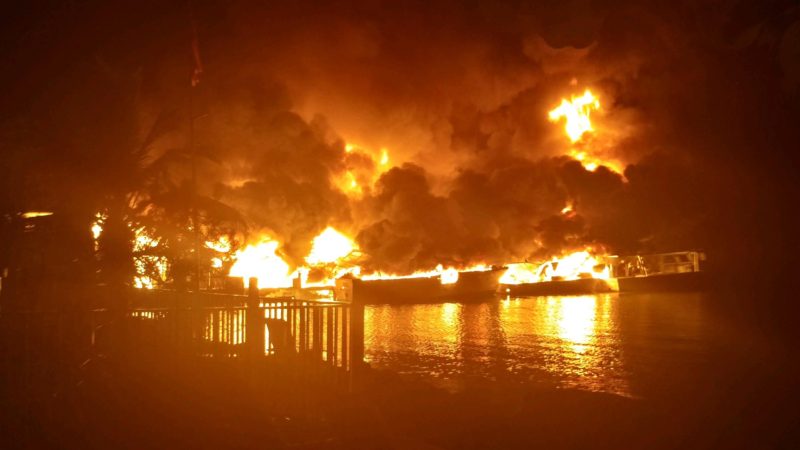 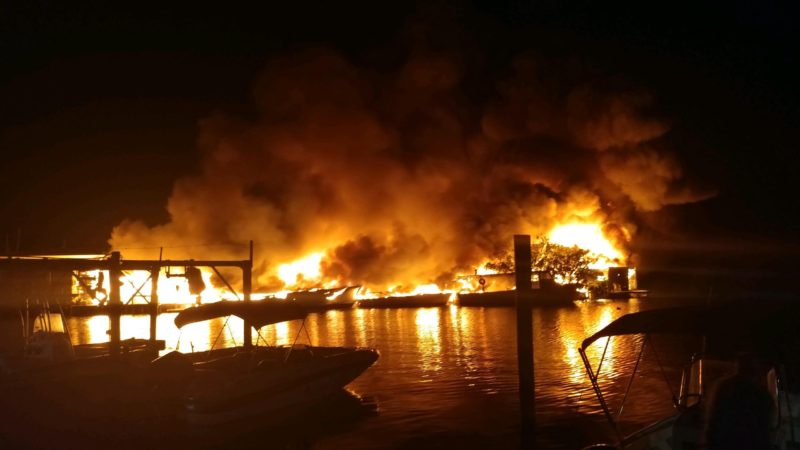 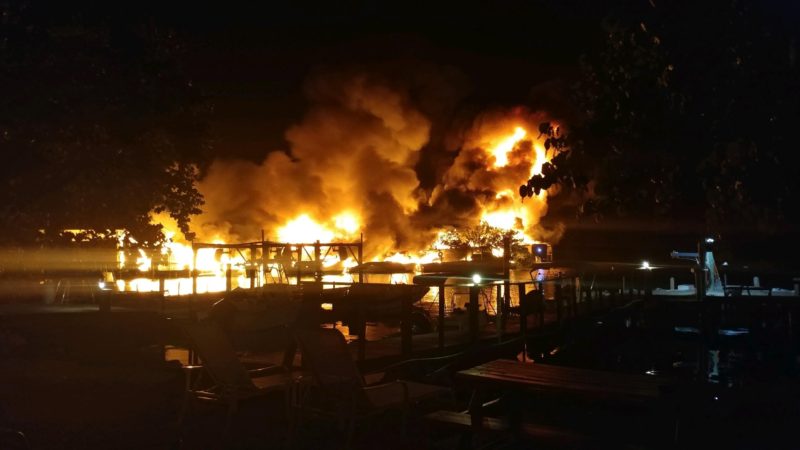 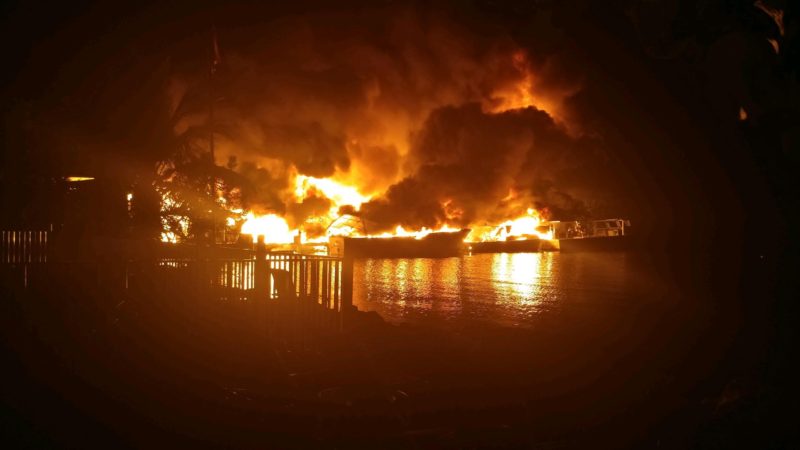