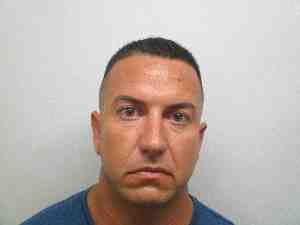 A Winter Springs, Florida man is under arrest charged with shooting and killing another man in connection with a landlord/tenant dispute on Duck Key.

The incident took place at 162 North Indies Drive on Duck Key at 6:20 p.m Friday. According to reports, the suspect, 32 year old Ryan Wilder of Winter Springs, Florida, and his girlfriend, 30 year old Amber Gray of Sugarloaf Key went to a home owned by his parents to illegally evict the tenant living on the premises. The tenants, 47 year old Kenneth Palicki and 25 year old Colleen Lyons, had been served with eviction papers which required them to be out of the house by August 23rd.

When Wilder arrived, Lyons was home but Palicki, was not there. Wilder walked into the house and reportedly began to remove the tenants’ property from the home and take it outside. As Wilder was removing the possessions from the residence, Palicki returned home. Wilder and Palicki began to argue.

Palicki told Lyons to call the Sheriff’s Office, which she did. While she was on the phone with Sheriff’s dispatchers, they asked her about weapons. She told them Wilder had a gun in a holster on his hip. During the call, Wilder allegedly shot Palicki multiple times. Lyons said she then saw Wilder walk out to his truck, gun still in his hand, and get in. She gave dispatchers a description of the truck and its direction of travel as Wilder drove away.

The truck was stopped a short distance away by Sgt. Joel Slough. The gun was reportedly found in the vehicle. Wilder was taken into custody. Palicki was transported to Fisherman’s Hospital in Marathon where he was pronounced dead. An examination of his body revealed four gunshot wounds to his left forearm, neck, mid-back and upper thigh. Major Crimes Detective Matthew Pitcher responded and conducted an investigation into the incident.

Wilder was arrested and charged with unpremeditated murder for shooting and killing Palicki. He was booked into jail.