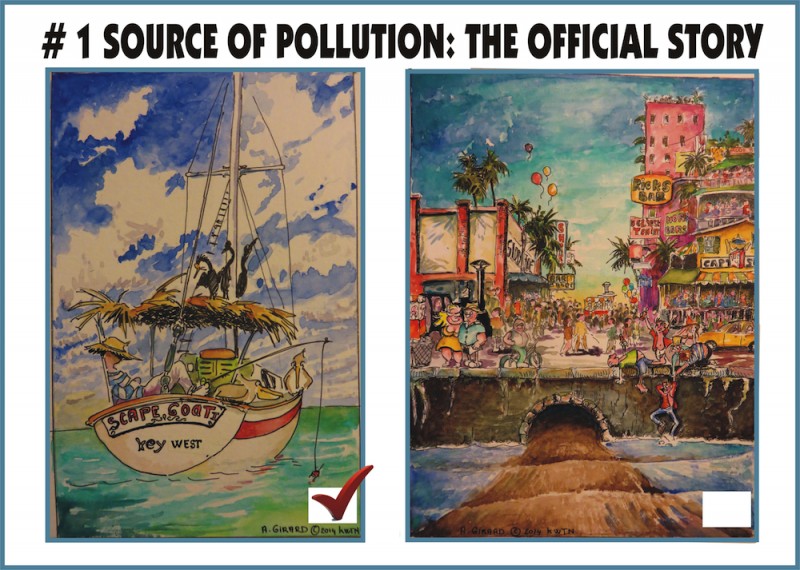 by Naja and Arnaud Girard…..

“I am sitting under the huge tiki hut roof and all I can think of is: Am I going to do it or not?” All around him people, hundreds of them, are having dinner, drinking, listening to the band of young local musicians, having a great time.

Only the owners of the restaurant know what our man is up to: The Boondocks Restaurant, a few miles from Key West, is, according to our whistleblower, dumping thousands of gallons of wastewater onto the ground every day. Even though the Department of Health has been turning a blind eye, the cozy and lax arrangement is now within range of a loose cannon with a conscience.

The Boondocks is a popular place and it employs some 50 people. Would you do it? Would you blow the whistle?

“The owner called me and begged me to drop it. Believe me, I hate to do it,” said the man to The Blue Paper on Wednesday. “But, my choice is to protect the environment and force the bureaucrats to do their jobs.”

Reacting to a complaint by the environmental crusader, Monroe County Department of Health (DOH) has now issued a notice to The Boondocks to cease and desist. According to the DOH ‘Notice of Violation‘, the restaurant’s septic system was based on maximum seating for 65. DOH however counted 207 seats during their recent inspection. DOH estimates that the Boondocks is producing 8,280 gallons of wastewater every day. The onsite septic systems built for the restaurant have a combined capacity of only 1500 gallons a day. “That is clearly an impossible situation,” says the crusader, “It’s like trying to empty 10 gallons of milk into a one gallon milk jug.”

From the septic tanks the wastewater is supposed to make its way to leach fields. However drawings appear to show the old leach fields are now under an expanded kitchen area.

Blue Paper: “So, where is all that sewage going?”

BP: “How does a leach field work?”

C: “You need vegetation and soil and rainwater. That way nutrients are removed and the wastewater percolates down through the soil with the help of rainwater. It can’t work beneath a kitchen floor or under a paved parking area.”

The amount of wastewater actually being produced by the busy establishment is also controversial.

C: “According to DOH’s own administrative code, when a restaurant is located on the side of a high traffic area like an interstate highway [and the Boondocks is on US 1] the gallons per day estimate must be multiplied by three.”

At that rate the Boondocks could in fact be creating three times 8,280 gallons of wastewater a day.

DOH ordered Boondocks to go back to 65 seats and gave them until September 1st to come into compliance. The DOH Notice makes no findings as to whether or not the onsite systems are adequate for the reduced number of seats.

“I’m not sure the set-up can even adequately process the effluent of a 65 seat restaurant,” observes the crusader.

“It often smelled like sewage,” said Brittany Hensen a former hostess at Boondocks, “the system was always backing up when I worked there.”

So, where is it all going? Probably into the ocean. Hydrogeologists have long recognized the phenomena of “tidal pumping” in the Florida Keys, where waters of the Gulf pass through the porous limestone rock, carrying sewage and its pollutants into the Atlantic ocean.

C: “In theory it all could be fixed very easily if the Cudjoe sewer treatment plant was ready to be activated. But again, the bureaucrats chose to design a system using shallow injection wells situated just next to a toxic dumpsite. People saw through that and now they’re going to need to dig deep wells  – but that won’t happen for at least another year or more.   We just need to get to a situation where those in charge of protecting the environment take their jobs seriously.”

And so we go on with our reporting on the death of the Keys’ seagrass meadows and coral reefs whose decomposed body and bleached bones lay in murky waters six miles offshore. In spite of excuses such as global warming and loop currents, the victim was probably asphyxiated, in no small part, by our own sewage and bureaucrats are persons of interest.

Well, the reef is only 90% dead. The crusader says he has six more cases that are going to knock you out of your socks.