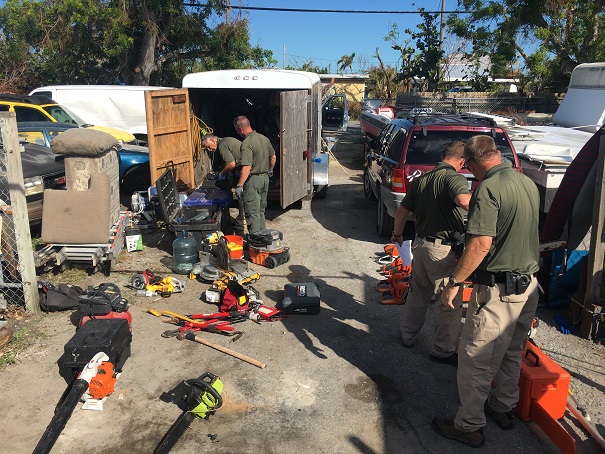 Sheriff’s detectives in the Lower Keys recovered a trailer full property at a wooded campsite on Big Pine Key. The trailer was found there after three men staying at the campsite were arrested for a home burglary on Shark Key October 22nd.

Inside the trailer, detectives found over 150 items they believe to be stolen. So far they have identified items stolen from the Shark Key burglary, two burglaries on Sugarloaf Key, one on West Starfish Lane and one on Cobia Court; and two burglaries on Long Beach Road, Big Pine Key. They have also identified stolen property from two cases in Jacksonville; one of the suspects is from that area.

The three suspects charged in the Shark Key case are 49 year old Robert Ray and his son, 21 year old Richard Ray both from Big Pine Key and 18 year old Noah Homer of Jacksonville. According to Homer, he’d just met the other two men and they were working together at a church on Big Pine Key clearing trees after Hurricane Irma. Charges for the other crimes are pending and detectives are working with the State Attorney’s Office to obtain warrants charging them with the additional crimes.

In the meantime, there is still more property from the trailer that detectives say they have not found the owners for. The property includes chainsaws, toolboxes, power tools, kayaks and a painting. People who are missing such items should contact the Sheriff’s Office to see if any of the recovered property is theirs. Call the detective division offices at 305-292-7060 and talk to Detective Sgt. David Smith.

Detectives recovered a distinctive set of keys at the campsite where the stolen property was recovered. They hope someone will come forward to identify them and they hope the keys might lead them to another victim in the case. A photo of the keys is attached.