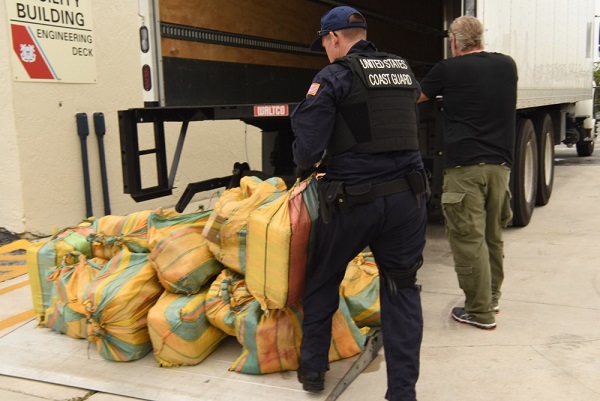 A Coast Guard Cutter Valiant crew member offloads a bale of cocaine at Station Fort Lauderdale, Sept. 27, 2017. The drugs were transferred to the Valiant after being interdicted in three separate cases in the Eastern Pacific in September. Coast Guard photo by Petty Officer 3rd Class Brandon Murray, public domain photo.

The offload is a result of interdictions from three separate cases in the Eastern Pacific in September.

“The Coast Guard is committed to combatting transnational criminal organizations at sea and each of these interdictions will lead to federal prosecutions, that in turn provide intelligence we can use to interdict more illicit shipments of drugs, people and weapons at sea,” said Capt. Mark Vlaun, staff judge advocate for the Coast Guard Seventh District.  “Our whole of government efforts are targeting the financial lifeline of organized crime to ultimately cause the collapse of these illegal networks.”