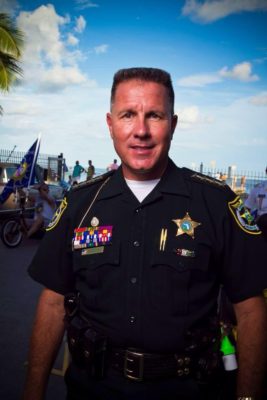 A well-connected Key West teen serving time for a burglary with a battery and attempted robbery will not be allowed to participate in the work release program, Judge Mark Jones ruled Friday, citing the Sheriff’s objections. The decision to deny Isaac Archer’s request comes after school officials wrote letters of support to the judge on Archer’s behalf on official school letterhead.

“It’s concerning to me to have these officials in schools lobbying judges to release a felon into the community who was convicted of burglary involving a high-powered automatic weapon,” said Dennis Ward, the State Attorney.

On February 19, 2017, the three teens; Isaac Archer, 17, Deon Bacon, 17, and 18-year-old D’Monte Davis forced their way into the home of a classmate, 16-year-old Lucas Armanini with an AR-15 style rifle. Archer charged the victim, threw him to the ground, and, according to the victim, tried to strangle him unconscious while Davis pistol-whipped him with the rifle. The teens stole 8,000 Argentine pesos from Armanini’s mother’s purse, worth about $511 in U.S. currency, and also took $70 from his wallet.

As part of a plea agreement, all three teens were convicted and sentenced as adults for first-degree felony burglary of a dwelling with battery and third-degree felony attempted robbery. All three were to serve 364 days in the Monroe County Detention Center, 100 hours of community service, two years of Community Control (house arrest) followed by eight years of probation for count one and three years for count two, and were not allowed to have any contact with the victim or each other during the period of supervision.

D’Monte Davis’ arrest in February was a violation of the terms of his probation for an earlier (December 15, 2016) arrest for burglary. Davis was denied bail, and remained behind bars. While incarcerated, he graduated high school in June 2017 and received his diploma at the Stock Island detention center. Davis has served his time and has since been released.

Deon Bacon posted the $75,000 bond, was sentenced on January 4, 2018, and is currently in the Monroe County Detention Center. He chose not to continue his education.

Despite the severity of his attack on a fellow student, Isaac Archer had already received an unusual “pass” and been allowed to remain free and continue to attend school so that he could graduate with his class. The Monroe County School District has a “zero tolerance” policy in place for gun-related offenses on school grounds or at school functions.

Archer, who is the son of Key West High School teacher, Raymond Archer, Jr. and Lisette Cuervo Carey (the assistant to Key West Mayor Craig Cates) was not allowed to participate in extra-curricular activities – including football where he was formerly a starting varsity offensive lineman. As part of his sentencing, Archer was required to turn himself him in on June 8 (after his graduation date) to begin his 364-day incarceration.

Now, less than two weeks into his incarceration, Archer’s attorneys filed a Motion for court recommended work release – a special program considered a privilege for inmates. The program allows low-risk offenders to work at paid employment while completing the terms of their sentences. They are required to reside in the jail facility, but are released each day to go to work and must return to the jail at the completion of the workday – a much more appealing option than days spent in jail. According to the Monroe County Sheriff’s Office, the facility administrator has the final authority to approve inmate participation.

“The Sheriff himself has denied this request,” said a prosecutor from the State Attorney’s Office during the hearing Friday morning. “I’m not even sure why we are here. Even if you signed this order, the Sheriff has made it clear that this is not going to happen.”

The prosecutor also pointed out that there is a set of charges that are excluded from the program for a reason. These charges include burglary of an occupied structure/home invasion, attempted armed robbery, battery, and “any other charges deemed inappropriate.”

“What I am asking for is outside the realm of normalcy,” Archer’s attorney told the Court. “We are not here to minimize the crimes.” She argued that Archer had already proven himself to the judge, and the letters from school officials reinforced that idea.

In her letter of recommendation, the Key West High School Principal, Amber Archer Acevado, stated, “When he [Archer] had to face the difficult challenges of making a bad decision that changed the course of his life, he continued to attend school and push through the obstacles before him to reach his goal of graduating.” Acevado is related to Archer but is not part of his immediate family.

Superintendent Mark Porter stated in his letter that it was “with great pleasure that I presented Mr. Archer with his diploma from Key West High School. He exceeded my expectations and clearly validated your decision to delay his sentence.”

The letters and Motion also point to Archer’s existing work experience at the Shell Gas Station as evidence of his work ethic and good attendance as additional reasons to recommend him for the program.

But Judge Jones disagreed. Although he applauded Archer for his progress, he noted that Archer made a “serious, serious mistake.”

“I can’t grant you participation in this program over the objection of the Sheriff,” he said. “The right thing to do is step up to the plate. Soldier through your sentence, and get it done.”

One Response to “Bubba Justice Shot Down by the Sheriff”