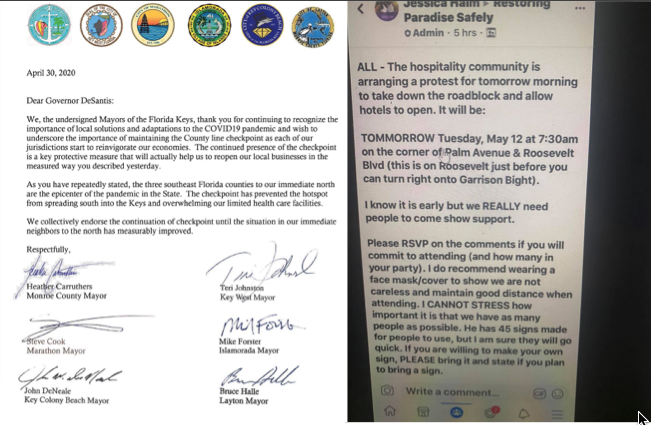 All six mayors in the Florida Keys signed a letter sent to Governor DeSantis on April 30th asking for the checkpoints on US 1 and Card Sound Road that keep visitors out of the Keys to remain in place. With a goal of keeping the virus under control in the Florida Keys leaders are especially focused on blocking visitors from the counties to our north  – counties that they say are the “epicenter of the pandemic in the State.”

But some influential community members don’t agree. Ed Swift, owner of Historic Tours of America (Conch train and trolleys) and many vacation rental properties in Key West, organized an early morning protest which was held at the corner of Palm Ave. and Roosevelt Blvd. Swift had 45 protest signs that he made available to protesters who had learned about the event through a Facebook group called Restoring Paradise Safely.

Swift has been credited, along with his business partner Gerald Mosher (“Moe”) (now deceased), with having a lot do with turning Key West into a tourist mecca after the city suffered economic fall-out when the Navy decommissioned the base in the late 60’s. He knows what it’s like to see a wave of Key West businesses shut down permanently and he says it’s already starting to happen.

Although Key West officially allowed a reopening of its restaurants and retail shops to locals on May 4th, no visitors means little to no business. Swift thinks we need to start getting our real economy going – and that means tourism. For that to happen, he says, the checkpoint needs to come down and visitors need to be allowed in (with safety protocols in place, of course). He calls continuing with the status quo “economic suicide.”

He’s not alone. Well over protesters joined Swift, most holding signs and many, including Swift, not wearing masks. Jessica Haim, who helped Swift get the word out about the protest, is a member of the County’s COVID-19 essential businesses task force. She and her husband, Yoni, own five retail stores on Duval.

But not everyone that showed up to protest came with that same pointedly economic perspective. In a video posted to One Clean Island Key West Facebook page we got an earful from a couple of Key Westers who don’t much believe in the COVID-19 “crisis”.

Question: “Do you think all the restrictions should be lifted?”

Woman: “I do think all the restrictions should be lifted. The whole world had this virus already so I don’t think it’s going to get any worse. Sunshine dissolves it.”

Man: “Something that’s hundreds of thousands of miles away that’s not even real? Come on! Give me a break!”

Question: “Tell me your thoughts about the pandemic – you don’t think it’s real?”

Man: “It’s a scam-demic, a plan-demic. I know that I do my research. I watch a lot of a -I do my own logic and thinking.

Question: “Do you know anyone who has had the virus?”

Man: “No. First of all the coronavirus is not purified, it’s not identified and it’s not visualized. None of the doctors do that. 80% is fail rate. It even says that on the CDC box. And the Tazinian [sic] – and you can look this up [we did] – the Tazinian President had his so-called expert scientists – he put bio-fruit, car oil and goat liquid in three different viles and named them as humans and guess what? Two of those came back positive. The car oil and the papaya oil – papaya juice.”

O.K. Back to the matter at hand – How long do officials want to keep the checkpoints in place?

Local officials asked the governor to allow the checkpoints to remain in place until “the situation in our immediate neighbors to the north has measurably improved.” Mayor Heather Carruthers said, during the countywide coordinating meeting this Monday, that Naples had opened their beaches last week and then were forced to close them again because visitors from the counties to our north were congregating in large groups, not social distancing and not wearing masks. Carruthers said, “I think [this] provides us more ammunition for why the checkpoint has been so helpful to us.” The county has announced that they mean for the checkpoints to stay put through the end of May and beyond.

So what is the situation “to our north”?

Miami-Dade County Mayor Carlos Gimenez announced this week he expects his county will enter Phase 1 of reopening possibly as early as May 18th. (The governor had originally excluded Miami-Dade, Broward, and Palm Beach counties from Phase 1 due to their high COVID-19 infection rate.) Phase 1 began in Monroe County on May 4th, with most restaurants and non-essential businesses (other than bars and nightclubs, gyms) allowed to open with reduced capacity and other restrictions as spelled out in the governor’s phase 1 executive order. Miami-Dade, which has had by far the largest number of cases in the State, had a cumulative count of 14,385 cases of COVID-19 this morning but Mayor Gimenez says his county has met the CDC “gating criteria” with a reduced number of hospitalizations, less patients on ventilators, and an increasingly lower percentage of overall positive test results. .  Broward and Miami-Dade are currently coordinating their reopening efforts.  Palm Beach was given permission by the governor to begin Phase 1 openings this past Monday.

Here are the latest graphs from Johns Hopkins University for Miami-Dade: 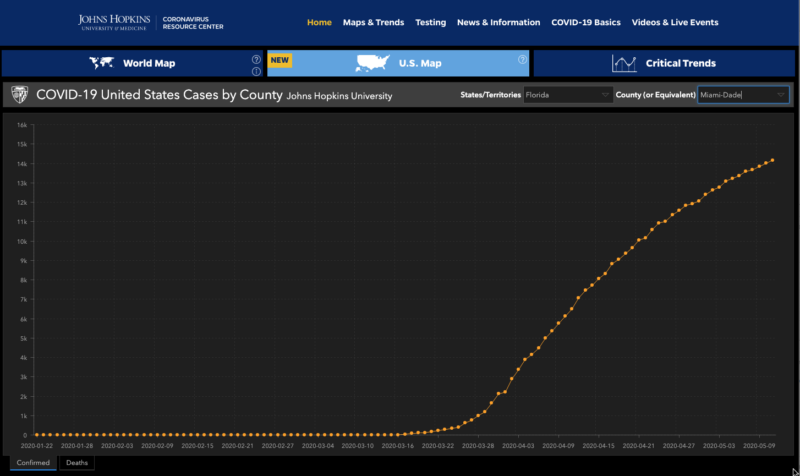 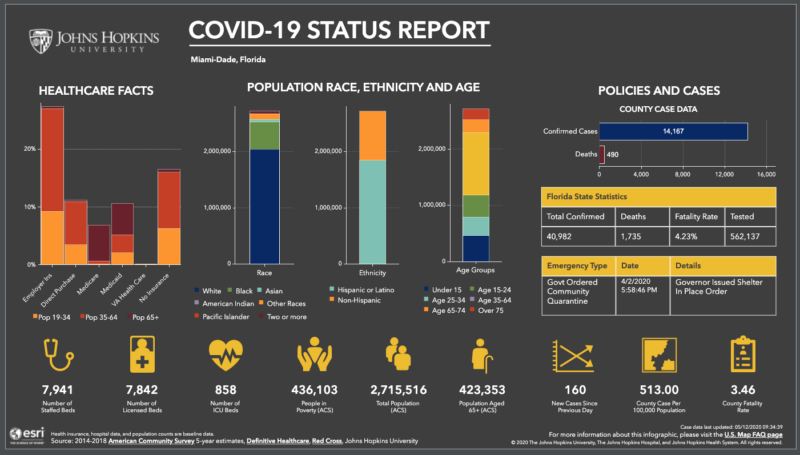 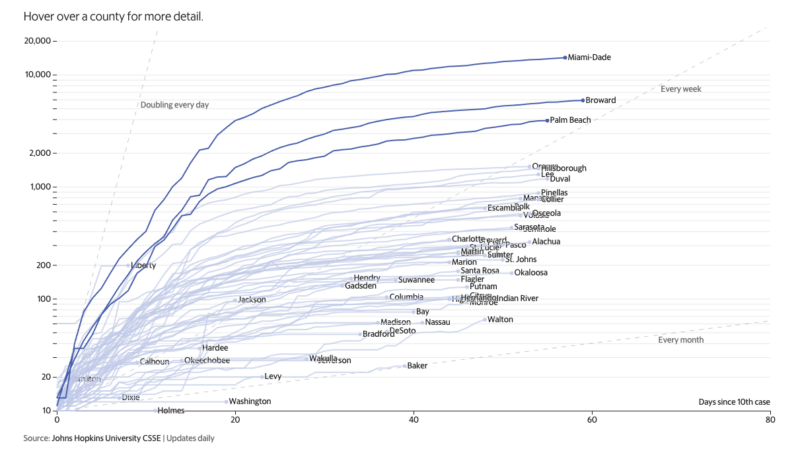 But Swift and his fellow protesters’ demands don’t stop with the removal of the checkpoints. His personal protest sign said, “Open the Hotels.” After all if you let visitors in – most will need a place to stay – and Swift himself has a lot invested in vacation rentals. However, Governor DeSantis’ Phase 1 reopening order specifically prohibits the lodging industry from opening at this initial stage and safety protocols for staff and clients have not yet been established. (See the governor’s executive order HERE.)

Monroe County, this week, announced that lodging establishments could begin to take reservations but that they would not be allowed to honor them unless the state of emergency had ceased to be in effect: “The amended directive authorizes lodging and vacation rentals to take reservations for any time period, but the vacation stays cannot be fulfilled unless the local state of emergency is no longer in effect, which would also result in discontinuing the two informational checkpoints on the 18-mile stretch and State Road 905 and screenings at Key West and Marathon airports.“

But the way Swift sees it, there’s more than one crisis in the Keys and not opening now, now, now will have grave consequences. “We’re going into a depression. Depression is not a pretty thing. It’s an ugly thing,” Swift told a videographer during the protest this morning.