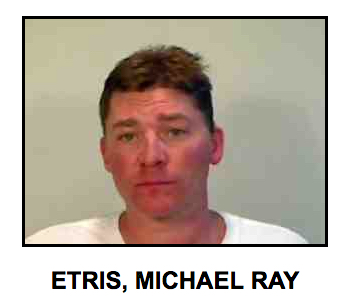 According to his wife, 42- year-old Michael Ray Etris, a visitor from Alabama, pulled out a knife in a Key West bar and told her he was going to kill a homosexual couple … because they were gay.

The wife, Kimberly Lauren Etris, told Key West Police Officer Cynthia Williams that she then took the knife from him to keep him out of trouble. She told the officer her husband was upset about that and the ride back to their hotel was not pleasant.

After arriving at the parking area near their hotel lobby, Etris and his wife began fighting in the parking lot in plain view of several witnesses. Kimberly Etris says she tried to call her father for help but her husband got on top of her, grabbing the cell phone away from her. During the altercation Michael allegedly pulled Kimberly’s hair and yanked her head down and wouldn’t let her go. Kimberly bit his arm and was able to get away. The officer found a small puncture wound on Michael’s arm.

According to witnesses, the couple’s toddler was in the back seat of the car and witnessed the entire altercation.

Michael Ray Etris was arrested and taken to the Monroe County Detention Center. Michael was reportedly extremely uncooperative with Intake Deputies and Supervisors. At one point, Michael reportedly made the statement to officers that his wife, “the dumb bitch,” was the one who was going to bond him out anyways.

Note: All suspects are innocent until proven guilty.