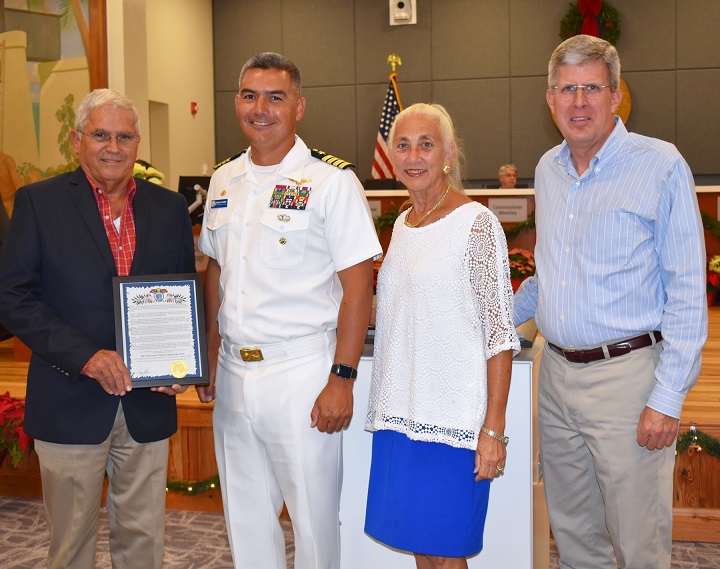 Mayor Craig Cates on Tuesday recognized the 100th Anniversary of Naval Aviation in Key West, proclaiming December 18th be set aside to honor this important milestone. Through booms and busts, the presence of the Navy has, throughout Key West’s history, has provided stability that has kept the community going strong.

The nation’s southernmost naval base, established in 1823, proved to be an ideal training facility for the Navy’s fledgling aviation force. Naval Air Station Key West was established as a small coastal air patrol station on July 13, 1917, at what is now Trumbo Point, on land leased from the Florida East Coast Railway Company.

On Sept. 22, 1917, the base’s log book recorded the first naval flight ever made from Key West – a Curtiss N-9 seaplane flown by Coast Guard Lt. Stanley Parker. Then on Dec.18, 1917, Naval Air Base Key West was commissioned and Lt. Parker became the first Commanding Officer.

During World War I, Naval Air Base pilots flew seaplanes and blimps in search of German submarines resting on the surface to recharge batteries. Naval aviation anti-submarine warfare was born. From the first class of student flight officers in January 1918, until the end of the war, more than 500 aviators were trained, establishing NAS Key West as a premier training site for naval aviators.

By the end of the war, Key West was a homeport for submarines, destroyers and aircraft squadrons. After the war, NAS Key West was retained as a training facility. The air station’s strategic location proved vital during the 1962 Cuban Missile Crisis. Reconnaissance and operational flights began in October 1962 in support of the Cuban blockade. President John F. Kennedy visited NAS Key West afterwards to thank service members and their families for their contributions during the crisis.

As in the past, the naval presence in the Keys was reduced during the 1970s with the closure of the naval station. However, the superior, year-round flying weather and strategic location of the southernmost air station was not overlooked. NAS Key West remained open and evolved into a state-of-the-art training facility for air-to-air combat fighter aircraft of all military services, and it remains so to this day.

Commanding Officer Capt. Bobby Baker accepted the proclamation and invited the community to an anniversary celebration on December 7th at the Custom House in Key West.