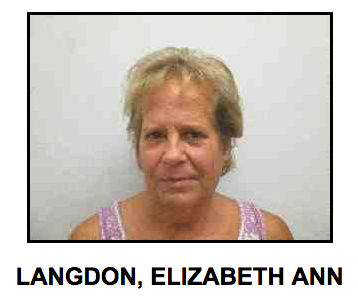 A Marathon woman was arrested after allegedly trying to extort her ex-husband for money.

On July 22nd, Deputy Aaron Coller responded to meet with the victim, who is the owner of the Wooden Spoon restaurant in Marathon. The victim played some recordings from his telephone answering machine for Deputy Coller. On the recordings, the victim’s ex-wife, 58 year old Elizabeth Ann [“Betty”] Langdon, says she wants him to put her on the books as an employee and pay her $25 an hour. She says if he doesn’t comply by July 25th, she will call the IRS and report him for his “nefarious” business practices.

Langdon reportedly left several similar messages with additional threats to report the victim. Deputy Coller obtained a warrant for her arrest and on August 2nd, she was taken into custody, charged with extortion.

Note: Information in this piece was furnished by local law enforcement. Please remember all suspects are innocent until proven guilty.