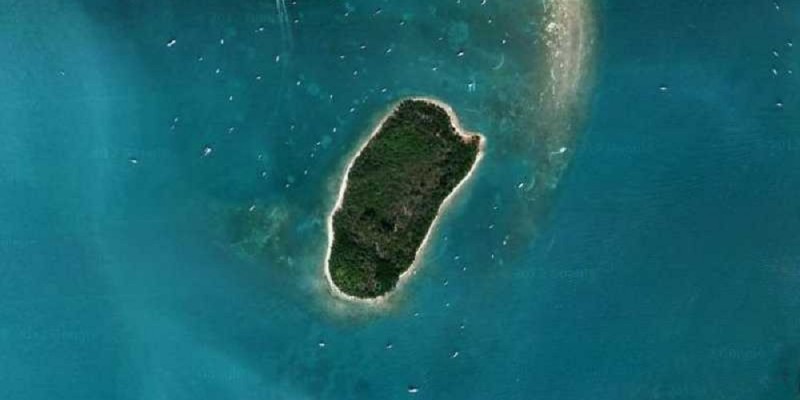 Get out of the tent! Joe Sanders had just woken up to deputies yelling orders. As he peers through the slit in his tent his eye suddenly focuses on the barrel of a deputy’s gun 6 inches away and pointed straight at him. Now, according to the federal government, Joe had pitched his tent on public land. Wisteria Island is claimed by the Bureau of Land Management and it is BLM’s policy to keep public lands open to the public, and that includes camping.

Joe’s adventure happened over a year ago, but this week the memory of that morning sprang instantly back into Kara’s mind when deputies woke her up in her tent on the island. Joe you see didn’t mind getting out of his tent for the deputies, but he was still naked. Pleading didn’t help. He says he was dragged out, forced to stand naked at gun point, hands up in the air, in front of everyone.

Last Saturday Kara, Joe’s former girlfriend, thought: “Oh boy! It’s my turn!” She too was sleeping naked in her tent on Wisteria Island. “In fact, this time they were very polite,” says the 26-year-old, “they gave me time to put my clothes on.” Then they took her photo and had her answer questions about where she works and where she lives. Kara lives on a boat, but often camps on the island. “It’s beautiful out there.” she says.

So why was the Sheriff’s Department again waking people up on Wisteria Island? Two weeks ago The Blue Paper debunked the story about how the Sheriff had found “12 people with active warrants” on Wisteria Island. The Sheriff’s Department had to admit that there was no record of those warrants. In fact, this week we were able to review records of Sheriff’s deputies’ dispatch communications made during the August 4, 2016 sweep. It shows that deputies did find 14 people on the island that morning and that they’d radioed the dispatcher to check for warrants. However, contrary to the official story, published repeatedly countywide, the CAD report shows that every single ID they checked came back as “clear.” (meaning no active warrants)

According to Sheriff Rick Ramsey, criminal elements living on the island are damaging the environment. As a solution, he’s asking BLM to agree that the island should be closed overnight and to allow trespass charges to be brought against anyone found on the island past 5:00 pm.

This week deputies came back from their early morning sweep having found 5 people sleeping on the island and several (3) improvised toilets. We reviewed the 108 new photos filed with their report. They show issues with illegal dumping, 3 makeshift cesspits, and 6 “permanent” camps. The photos essentially depict issues of littering and pollution.

Because the photos point to environmental crimes more-so than trespass issues, we wanted to learn whether law enforcement currently has any power to crack down on people who are dumping and littering. We asked State Attorney Dennis Ward whether he would be willing to prosecute if the Sheriff brought up such charges. “If they want to bring me that kind of case they certainly can,” was Dennis Ward’s answer.

Yet for the past year Sheriff Ramsey has been piling up photo after photo of the same makeshift camps and illegal cesspits while there’s no record of the occupants of those camps being charged for the illegal outhouses they use or the piles of junk they’ve collected. Under Florida Statute Chapter 386, after being notified by the Sheriff, the Department of Health would be obligated to remove the “sanitary nuisance” if it still remained after posting a 24-hour removal notice.

And then there’s Roger Bernstein who is fighting the U.S. government over the ownership of the island. He too claims to be very concerned about the environment. He sent his lawyers to convince county officials and now the BLM to find a way to prosecute those on the island for trespassing. Yet he hasn’t tried to press charges against the permanent dwellers for littering or sanitary nuisances.

Many locals do not seem surprised by this contradiction: Mr. Bernstein’s record as the steward of the island is at best controversial. “Way before he lost his court case we offered to do another clean-up of the island,” recalls Satya Wildwood, who lives on a boat near the island, “Bernstein refused. After that a complaint was filed with the county code department who ordered Bernstein to clean up the island. It sure looked like the man was hanging on to that garbage as if it was gold,” says Satya, “for him it must have meant ‘photo-op’. It was political gold, proof that the island needed to be developed.”

When the island was on fire three years ago it burned for over a week.  After a few days, The Blue Paper asked the county’s fire department why they weren’t responding. Their response was: Mr. Bernstein hadn’t requested their assistance. The fire was finally put out by volunteers from the anchorage.

With the State Attorney ready to prosecute any environmental crime case that “has merit”, the friends of Wisteria Island are left with mostly unanswered questions:  Doesn’t it seem that law enforcement already has all the tools it needs to keep the island under control? Is there a deliberate failure to enforce existing environmental laws? A deliberate focus on 4 or 5 social cases on an otherwise pristine 22-acre island?

Is closing the island and creating an opportunity to prosecute a trespass case just a creative way to reintroduce Bernstein’s claim of ownership, otherwise barred by the statute of limitations? The State Attorney is confident that this will not happen. [Proof of ownership is a necessary element in a criminal trespass case.] Prosecution of environmental crimes does not require a link to ownership.

Right or wrong, many residents will feel this is just one more of the scarce resources we have left — being ‘regulated away’. As locals, they can no longer park a dingy beside their homes because that might hurt the real-estate value of a new neighbor from up north. As a result, they can no longer take their children offshore fishing because there’s no more free access to the ocean for locals unless they can afford prohibitive marina prices. One can no longer fish or swim from most public piers and it’s been years since anybody could legally sit on the beach past 11 pm.

“If you are not a tourist or a retired millionaire,” says Satya, “you’re pretty much expected to just work and pay rent in Key West.”

Wisteria island is the last place where even the poorest of the poor could offer their kids the priceless wonder of nature. Until now, it included a night under the stars.

BLM is in the process of making a decision on whether to agree to a closure order that would prohibit visitation of Wisteria Island  by anyone between 5:00 PM – 8:00 AM. If BLM does move forward with the overnight closure order, the detailed proposed regulations will be published in the Federal Register and a 45-day public comment period will follow.

(a) To protect persons, property, and public lands and resources, the authorized officer may issue an order to close or restrict use of designated public lands.

(b) Each order shall:

(1) Identify the public lands, roads, trails or waterways that are closed to entry or restricted as to use;

(2) Specify the uses that are restricted;

(3) Specify the period of time during which the closure or restriction shall apply;

(4) Identify those persons who are exempt from the closure or restrictions;

(5) Be posted in the local Bureau of Land Management Office having jurisdiction over the lands to which the order applies;

(6) Be posted at places near and/or within the area to which the closure or restriction applies, in such manner and location as is reasonable to bring prohibitions to the attention of users;

(7) Include a statement on the reasons for the closure; and

(c) In issuing orders pursuant to this section, the authorized officer shall publish them in the Federal Register.

(d) Any person who fails to comply with a closure or restriction order issued under this subpart may be subject to the penalties provided in § 8360.0-7 of this title.