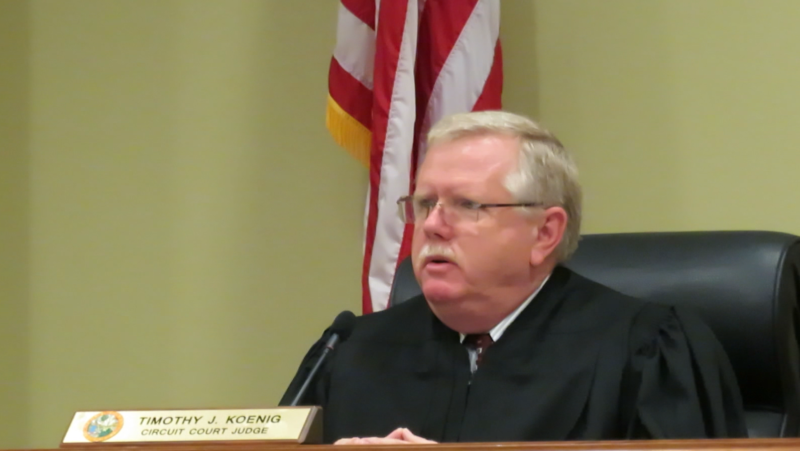 It appears that residents have been unlawfully forced to sign easements with FKAA, their sewer utility company.

The easement was a prerequisite for free installation of a sewage grinder pump for those homes deemed too remote for a simple gravity connection to the plant on Cudjoe.

Five years ago, when the work began, many residents resented the government’s intrusion into their front yards: The 5-foot easement all around the pump itself, the obligation to provide electrical power to the pump at their expense, and the prospect of maintenance workers coming onto their property whenever they felt like it.

The cost of maintenance was also an issue: While it was clear that only FKAA could perform maintenance work, the easement contract was silent as to who would pay for it in the future.

Residents were offered only one alternative: Purchase, install and maintain, at their own cost, a grinder pump approved and permitted by FKAA.

While hundreds of property owners protested informally, one property owner decided she wasn’t going to take it. Louise Delaney, who lives on Little Torch Key, filed suit challenging what she felt were FKAA’s strong-arm tactics, asking the Court to interpret the ordinance that she believed guaranteed her a right to a gravity connection at the street.

She argued that if the utility company wanted to use grinder pumps they had to be installed on the county’s right-of-way and powered at the government’s expense.

This month Judge Timothy Koenig agreed with her.

In a declaratory judgement, Judge Koenig ruled that under Monroe County Code 20-105(e) homeowners have a legal right to be provided with a gravity feed connection to the central sewage system, at their property line.

In other words, the government is obligated to provide a sewer connection to which a property owner can connect through a simple gravity pipe sloping down from their home to a connection located in the public right-of-way.

Judge Koenig, in his order, describes the law itself as “clear and unambiguous.”

“Under the plain language of MC 20-105(e), the Defendants cannot compel the Plaintiff to install a grinder pump, which is powered by electricity and not the gravitational attraction of the Earth’s mass, before connecting her property to the public right-of-way, an item that is powered by electricity. Such a requirement plainly, necessarily, and unlawfully interferes with the Plaintiff’s right to a gravity system by converting it into a low pressure or hybrid system.”

This is the first courtroom victory in residents’ long battle against the CRWS’s grinder pump system design.

In 2013 many residents who found themselves on the grinder pump map turned into activists. They created the “Dump the Pumps” movement and sued the County and FKAA, claiming the pumps were a bad choice and that the system design was not up to DEP’s standards. The grinder pumps, they said, had a reputation for breaking down and would be vulnerable to hurricane flooding.

Transparency became an issue: Residents discovered that legal notices for public meetings were mysteriously published in Broward County instead of Monroe, that the environmental study had been falsified. It didn’t help either that County Commissioner George Neugent called those who found themselves on the infamous grinder pump map “ losers” and that some residents found their way off of the “loser list” while others, in similar situations, had the door slammed shut in their face.

By the summer of 2017, community advocate, John Prosser, asked the State Attorney’s office to investigate 11 possible violations of law and why some county officials seemed so bent on purchasing thousands of those particular grinder pumps. Bring me some proof and I’ll pursue, Chris Weber, the State Attorney’s Chief Investigator, told him.

The “Dump the Pumps” group lost their administrative challenge when a judge agreed with the government that standards were met and the pumps were adequate and reasonably flood-proof.  Many residents felt they were “losers” again after Hurricane Irma, when it became evident that they were not.

The government opposed Louise Delaney’s lawsuit, arguing that her claim had already been adjudicated in the “Dump the Pumps” administrative challenge. But Judge Koenig disagreed, ruling that the question of the forced easement was separate from the issue of the CRWS system design adequacy.

Louise Delaney’s case is not over.

She won on her claim that FKAA should have provided her with a gravity connection outside her property but it may be of no relief to her if a jury finds that she waited too long to inform FKAA of her intention to assert that right or that she intentionally misled them.

Some area residents certainly did not hide their feelings about FKAA’s intrusion onto their property.  The Blue Paper was shown a copy of one signed easement. That property owner added the note: “This is being signed under duress because pumps should be on the street or right-of-way. This is extortion.”

There are 270 residents, in the Cudjoe Regional area, who have not complied with FKAA’s requirement to place a grinder pump on their private property.

Note: Here is a link to a gofundme account set up for Louise Delaney by the Banks Prevatt, the founder of “Dump the Pumps.”:  https://www.gofundme.com/louises-legal-expenses